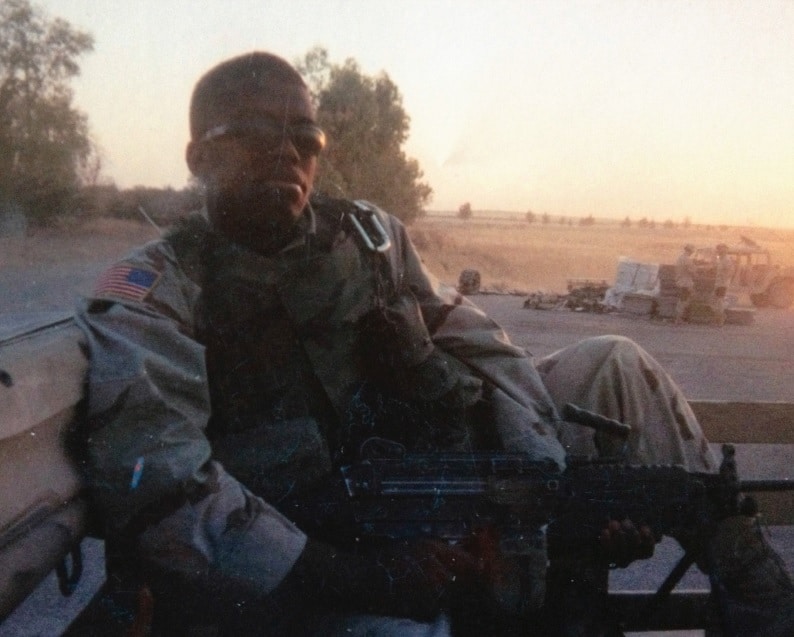 Rob Smith: Looking back on being closeted in the Army, five years after Don’t Ask, Don’t Tell

Editor’s Note: Five years ago today, the “Don’t ask, don’t tell” policy on military service by lesbian, gays and bisexuals officially ended. To mark the anniversary, we’re publishing an excerpt from “Closets, Combat and Coming Out,” the Lambda Literary Award nominated memoir of Rob Smith, a young African-American man coming to terms with his sexuality in a hyper-masculine U.S. Army.

From Chapter 8: An Education…

One late Saturday night, I found myself alone at local gay club Hide and Seek when a cute redhead approached me on the dance floor. I danced with him relaxed and carefree like I did with all the others, but I stopped in my tracks when I noticed two very familiar faces through the neon-blue haze of the club.

Right next to the bar, standing beside two women, were Sergeant Kane with PFC Lopez, another soldier from my platoon. Though Hide and Seek was known mostly as a gay club, it was also one of the few after-hours spots in the city. It wasn’t uncommon for straight couples to come if they wanted to extend the night past 2 a.m. I had no doubt that Kane and Lopez belonged in this category.

I froze in fear. My first instinct was to leave the club right then and there, but they’d already made eye contact with me. I cringed as they smiled, turned to each other, and started to laugh as if a long-held theory had finally been proven. I panicked, wondering how much they saw. I felt my entire body go slack. I knew it was over. I knew I’d return to base that Monday morning to find my discharge paperwork waiting for me because I’d been seen “telling” by two soldiers in my platoon. The DADT policy was sneaky like that. I’d recently done a little digging, and learned that I didn’t have to come out to anyone to get kicked out. If I were seen “engaging in homosexual conduct” I could have charges brought down upon me. I was quite certain that the amount of pelvis-grinding that I was engaged in with the cute redhead easily qualified.

Unfortunately, there was only one exit from the basement, and using it required the need to walk directly past Kane and Lopez. Maybe it was possible that they hadn’t seen me do anything. I rushed past with my head down, but heard the unmistakable “Smith!” booming from Kane’s loud voice right before I hit the stairs.

My shoulders fell. I was caught. I turned around and looked in Kane’s direction, everywhere but in his face because I couldn’t bring myself to look him in the eyes. In that moment I felt deeply ashamed. I felt as if everything I’d done thus far to try to be a good soldier was nullified. I knew I was an average soldier and nothing special in that respect. I knew that I just got the job done and nothing more, but I’d managed to stay out of trouble for the past three years. I’d avoided the legal pitfalls of other soldiers who got arrested for domestic abuse, DUIs or public intoxication. Even after all of that work, my military career would be killed because I got caught in a sleazy gay bar in a desperate search for somewhere to express myself.

I continued to look down, embarrassed and frightened beyond belief.

“Where you heading off to in such a hurry?”

He seemed perplexed by this, and he furrowed his brow as if trying to figure out a complicated mathematical theorem.

“Look, just calm down. I’m not gonna…Look, man, just chill out, okay?” he said. “You wanna go, then go, but I’m not forcing you to go anywhere.”

I turned around to make my way up the stairs and out of the club. I felt deeply ashamed in that moment. I didn’t know whether it was because I was gay or because I got caught. The rules made being gay such a punishable secret that it was hard to see the boundaries sometimes. If being gay were normal or natural, certainly it wouldn’t be legally punishable in the military. In a place deep within me I knew there wasn’t anything normal or natural about what I’d been doing for the past few years. It wasn’t because of the gay aspect but of the lack of any type of real connection to the various bodies I’d become accustomed to giving myself over to.

I drove home in stunned silence. The traffic lights were blurry blobs of red, green, and yellow through my tears. I was just over a year from my end date, and this was how it was going to end? Caught at a gay club and railroaded out without hopes of seeing even a penny of the $50,000 in college funds that I was contracted to receive. I cursed being gay, cursed the Army, and cursed the fact that I’d even decided to go out that night. Maybe my mother was right. Maybe it really wasn’t what God intended, and I was getting what I deserved for being this way. It just seemed so deeply, fundamentally unfair. I had no control over my sexual orientation. I didn’t ask to be born like this, so why was it making things so hard? I stayed in bed for most of that Sunday, scared shitless at what the next day would bring.

ROB SMITH is an openly gay Iraq war veteran and multimedia journalist. He holds a M.S. in Journalism from Columbia University, and has reported for NBC News, Time, and AOL among others. His memoir, “Closets, Combat and Coming Out” (Blue Beacon Books) is available on Amazon.com and wherever LGBT books are sold. For more information on Rob, visit robsmithonline.com, or follow him on Facebook @robsmithonline.