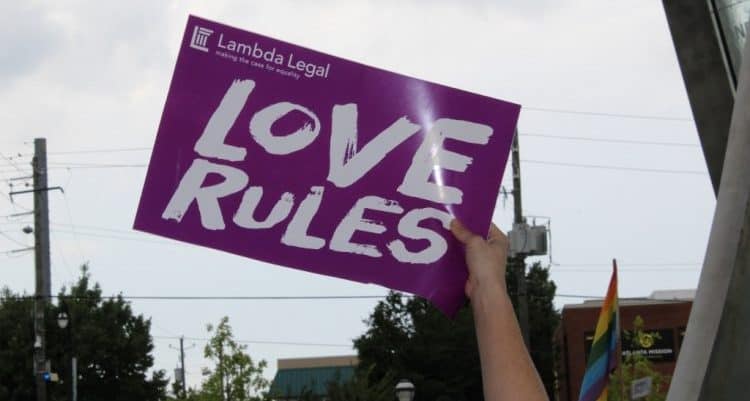 Activism in the Age of Donald Trump comes in myriad forms. Some protest, some turn to their creative drive.

Will Robertson, choir director at Congregation Bet Haverim, a LGBT-friendly synagogue in Atlanta, did both. He turned his anxiousness about the political environment into an empowering protest anthem.

The song “Hold it High” debuted earlier this month after rave reviews during a choir performance.

“I really feel this is a nonpartisan issue,” Robertson said. “It’s our birthright as Americans to be able to talk, speak back to our government. That’s how we were founded. It became such an important issue to me as I sort of envisioned where we might be headed, especially after hearing some of the things that were being said during the campaign.”

The inspiration to do something started the day after the 2016 presidential election.

“I had been feeling so, kind of despondent about the tone that the campaign had taken, and like a lot of other folks when we got those results on Nov. 8, I felt defeated and helpless,” Robertson said. “I started writing this song for myself, as a tool for myself to help me feel more empowered.”

Seeing the images of marches after the election moved Robertson even further.

“I started reflecting on, this is actually what America is. The idea that we can assemble in the street is right there in the First Amendment. The idea that we can tell our leaders what we think is so important to what it means to be an American citizen,” he said. “The Declaration of Independence was the first version of this, where a group of people declared we’re not going to take this anymore.”

As the lyrics poured out, Robertson decided to bring the project to his choir, which “latched onto it” and the song became a sort of anthem.

“We sang it at our Shabbat Shirah service and we got a big response from the congregation and the attendees that were there, and people saying, ‘I need to hear this again,’” Robertson said.

That response prompted him to record the song and widen its reach. It’s available right now on YouTube and for download on the music site BandCamp. He also has the choir arrangement available.

The video for “Hold it High” features protest signs that complement what’s happening in the song. For the portion that talks about love being the key, Robertson said he and his videography team chose to use signage from the marriage equality movement.

“The main message of the song is, we have to keep going. We have to keep marching,” Robertson said. “The LGBT and ally communities have had a lot of successes recently, but we know it’s not over. I hope that this song is something folks can listen to and really get that strength.”

Robertson figured several months after the election, pop culture would include songs about protesting or reflections, and his prediction is coming true, he said, referencing the MILCK song “I Can’t Keep Quiet.”

“Any time you have a massive event like this — and whatever side of the political spectrum you fell on, this was a massive event — I think it galvanizes artists, whether they be songwriters, visual artists, filmmakers, to process this … to respond and to give folks ways to process what’s happened.”