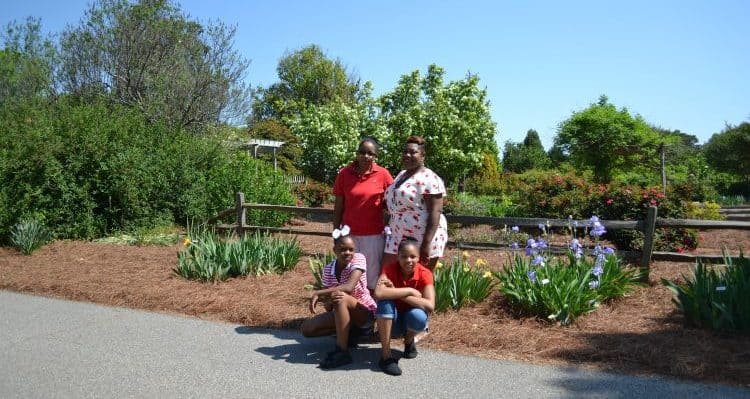 Toniqua Ward searched and searched for a support group of LGBT parents in the Atlanta area. She found plenty of opportunities for singles, couples and youths, but none was exactly what she was looking for.

So she created her own.

Ward launched the Atlanta LGBT Families Meetup on April 22, and has big plans for how the group will evolve.

The group will meet twice a month. One meeting will be for parents, and one more of a family outing — including hopefully a Disney cruise as the group grows. With so many types of parents and ages of children represented in the membership already, Ward thinks there will be plenty to do and to talk about.

Ward and her partner, Japera Ferrell, live in Griffin with Ferrell’s two daughters from a previous marriage, Jayde and Ayumi Anderson.

“When I met my girlfriend, the kids were probably about 6 or 7,” Ward said. “They were real quiet at first, but over time they got used to me and now they call me ‘mom.’ Their dad is present in their lives … I have a good relationship with him as well.”

Jayde and Ayumi’s father is also gay — he and Ferrell came out to one another, something Ward said they all laugh about. She said the girls don’t fully understand the purpose of the group, which is organized through the Meetup social media website, but are excited to meet with children who also have LGBT parents.

Though the Meetup group will be the only such family group in Atlanta, other areas around the country have had LGBT family support groups for decades.

“The notion of family remains fairly nuclear and heterosexual, even though that type of family is the minority of the total families in America,” said Polly Pagenhart, director of policy and communications for the San Francisco, California-based Our Family Coalition. “Twenty percent of American families are a man, a woman; they both biologically are responsible for the child and no one is divorced or blended from a previous coupling.”

“It’s really hard to find a place where you can be a queer parent or a queer caregiver around others who understand,” they said. “Most people will assume anyone holding a child is straight. If you’re not with your partner and not lip-locked, you’re going to be presumed as straight more often than you’d like.”

Our Family Coalition hosts a number of workshops and events for parents, and childcare is always provided. The organization also puts together opportunities for families to gather together, and Pagenhart said Ward’s desire to do the same is spot-on.

A place to feel normal

“Our kids really need to see their families reflected in the public sphere around them, and not just in the private sphere around their home,” Pagenhart said. “For our kids … it’s really going to be big for them to be at the zoo, this completely ordinary place, to see those two dads — and they have two dads.”

That was the exact thing that inspired Ward to form the Meetup group after her ongoing search for an existing family group.

“We went to the mall one day and [Ayumi] saw a lesbian couple. She was like, ‘Look, you’re not the only ones!’ I know they would feel more comfortable being around kids that have two parents that are the same sex. They could talk to them and get comfortable,” Ward said.

Pagenhart said they applaud Ward for developing the Meetup. They called it a “huge service” to the metro Atlanta community, and a great way to pave the way for future generations.

“Having two parents of the same sex isn’t what society thinks is normal. Because it’s not ‘normal,’ a lot of kids may feel like they’re different. They may feel like they’re getting teased,” Ward said. “We need to be amongst each other so the kids know there’s nothing different, just because you have two moms or two dads or your mom or dad may be transgender. It doesn’t matter. You’re still loved, and can’t no one else take that from you.”