Currently working on a book titled “1961,” Gale, 28, says her goal is to recover a historical narrative.

“My background is in archeology and the first thing you learn is that excavation is destruction,” she says while seated on an Ikea couch in her small studio at the Atlanta Contemporary Art Center. “So you’re always deconstructing something and then you’re trying to piece together a story based on these little artifacts and clues you find.

“That’s kind of what I’m doing with this series in the book,” she explains.

The book will be a combination of color slides from 1961 that she found in a novelty antique store, photos that she has taken and mug shots of the Freedom Riders from 1961 as they rode buses through Mississippi trying to spread hope and equality.

“I believe everything happens for a reason and I found these slides all from 1961 when I was trying to come up with a concept,” she said.

The color slides are random — they include images of proms and picnics, for example. Gale’s mother was born in 1961 and “lots of interesting stuff was happening that year, “she says.

The book will be a reappropriation of the images by combining them with racist and segregationist text.

Using an anti-integration letter from a KKK Grand Wizard to Malcolm X in 1961, as well as the transcript of a speech in 1961 by Georgia’s lieutenant governor hailing the virtue of segregation, Gale says the book will become a reclaimed historical narrative.

“When I started cutting text up I wanted to make it the opposite of what they are saying. Hopeful, cheery. But then it turned into a romantic, almost sexual, narrative,” she says.

This almost sexual narrative that comes from segregationist words taps into the idea that all people have secrets, Gale adds.

She hopes when the book is complete — look for it as soon as September — people will look through the pages and see something that they haven’t seen before.

“When we think about certain groups of people who have had their histories either erased or not even recorded … we go back and after mining the archives and putting together their narratives, I hope people will look at this [book] and reconsider what they accept as fact a lot of times,” she says.

Words and text are very important parts of Gale’s work as well as the imagery. A person who loves to read and who at one time wanted to be a writer, Gale says words by themselves can be as powerful as a color splashed across a canvass and can evoke different emotions and reactions.

“I think my relationship with text is the same relationship that I’ve had with photography my entire life. It’s something I’ve always been drawn to. It just took me a while to figure out how to incorporate into my work,” she says.

Gale has completed a couple of series of text-only art. For example, “Modern Romance” is a series of 14 pieces where the word “fuck” becomes “love” by changing one letter in each piece — like a word game.

“Language is one of those things that’s everywhere. We’re surrounded by it,” she says.

From silent film to gay zombies 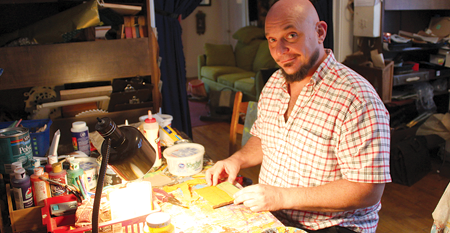 Born in Huntsville, Ala., Milford Earl Thomas, 46, grew up in the nearby small town of Arab knowing he wanted to be an actor — at least until the sixth grade.

“That’s when I realized it was more exciting to create the entire experience,” he says from his apartment on North Highland Avenue.

As a youngster, Thomas made films with his family’s Super 8. His first film, “Dracula Roams New York,” starred himself with his father directing.

“I made a lot of movies. They were just horrible, horrible movies,” Thomas says. “They are unbearable to watch but I still have them.”

He made title cards for the silent films and recorded music on cassette tapes to play along with the film. He was also fortunate enough to live in a supportive community where teachers allowed him to screen his silent films in class and students would eagerly sign up to star in his creations.

By the 10th grade, Thomas filmed a “Gone with the Wind” epic with 30 to 40 students in it. The silent film was shown at the local cinema and all the money collected in ticket fees was donated to St. Jude’s Hospital.

“Now every kid out there is making bad YouTube videos,” he says.

Thomas became well-known in the film circuit with his silent film “Claire,” a story based on a Japanese fairytale that featured an elderly male couple who adopts a young Asian girl they find in the wilderness.

“Claire” started as a 10-minute short and became a 53-minute film shot with a Mitchell Standard 35mm hand-cranked camera. It is only screened with live accompaniment of composer Anne Richardson’s original score.

Last year it celebrated its 10th anniversary with a screening in Atlanta at the Woodruff Arts Center with the full Orchestra de Lune — including a harp, hanging chimes, very involved percussion. Because the film can only be screened publicly with live music, it’s only been screened 12 times.

“It’s so prohibitive. It’s my bad,” Thomas said, noting he wanted the music to be complicated and intricate. It costs $4,000 to screen the film, so money is a factor as well.
Recently, however, the Atlanta Sisters of Perpetual Indulgence awarded Thomas a $500 donation that will be used by Anne Richardson to compose music for a four-piece

quartet, making the film more accessible to college campuses and big cities where people would be willing to donate their time to play the music.

“It’s received a lot of good response and I really want to share it,” he says. “I’m really looking forward to that next stage.”

Currently, Thomas is working on another film — perhaps the complete opposite of the silent film genre he adores. After attending Sundance and trying to get people interested in his serious film work, Thomas said he decided to go the grossest way possible — a gay zombie movie.

Named “Pretty Like Me,” the film is about zombies who are beautiful gay men who kill their victims by eating their asses. But Thomas says the film is “not a gay ghetto film.”

“It’s more an homage to the classic horror film,” he says.

The main love story is between an elderly woman who is a professor and a gay male stripper.

“There is a little bit of gay community commentary that goes on. Bears and dykes band together to kill the circuit boys,” he says with a grin. “Everyone gets dissed — gender, sexuality, cultures. It like early John Waters meets George Romero.”

The film is very ambitious in its scope and will not be cheap, Thomas explains. His team, including local producer Linda Burns, whose film “V/H/S” sold at Sundance, is biding its time.

“It’s all filmed locally. I’m really excited about it. I’ve talked to some ‘70s and ‘80s sexploitation actresses to play the lead and there is some interest,” he adds.

Thomas also spends a lot of time creating art from old photos he collects of homoerotic scenes and has some of his work on display at Youngblood Gallery and Homegrown Decatur.

“This art is fun and provides instant gratification,” he says. 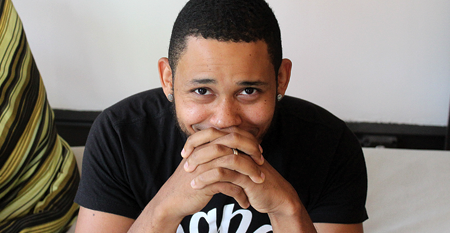 Alex Darling, 33, was born in Boston, Mass., but has lived in Atlanta since he was seven. A prolific traveler who enjoys learning about other cultures, Darling has also lived in New York, Paris, Korea and attended the University of Wales.

But he calls Atlanta home.

“There is a character about the people who live here and nuances to the neighborhoods. You have to live here to get it. There’s just a quality to the city that sucks me back in all the best ways,” he says.

Which is saying a lot about the city because as a travel photographer, Darling has visited some of the most exotic places on the planet to photograph everything from religious rituals in India to one day in a Buddhist’s life.

Because Darling loves to travel, it was easy for him to become a travel photographer and freelance for magazines and websites. But he also has a fine art side of his work that is his way of expressing what he sees surrounding him.

“A lot of the fine art work I do is based around ideas of identity and ritual and how each of those form each other,” he says.

In places like India, Thailand and parts of Japan, the two are so intertwined their identity is their ritual, he explains.

But to be able to capture the spirit of a person through a photograph, that means spending a lot of time with them.

“For longest time I tried to shoot from far away. I was afraid of people and tried to shoot with these giant zoom lenses, trying to get something pure and candid. But it didn’t work; there was no emotion,” he says.

Darling then began meeting the people he wanted to photograph and spending time with them, talking to them, even sharing in some of their rituals.

“If you sit and hang out with someone opening yourself up to them, and they do so in return, they give you themselves unguarded,” he says.

More than a year ago, Darling traveled to a remote island in western Indonesia where the people wore loincloths, took showers in the waterfalls and had no interest in the modern day world. Except they wanted cheap, instant cappuccino.

“It was a 10-hour boat trip, four hours in a canoe, a three-hour hike and then in another canoe — all to go back thousands of years,” he says. “When I got there, I thought, ‘Holy shit, places like this really exist.’”

Darling lived with the tribe which readily accepted him. And he sees on his trips and through his lenses that people are the same — we all want love and to be loved.

“People are the same. That’s ultimately what I want to show people,” he says. “This is a distant place, but it’s not really. This is a version of you. We have so many problems that come from us dividing ourselves. I want to erase a little bit of that.”

And how does Darling describe his work? That’s easy.

“There is always much more,” he says.