‘Tis the season for holiday parties

Atlanta’s gay calendar is always a robust one but the holiday season can create whiplash for partygoers. Here are some of the major parties and special events through the end of 2013.

The king daddy of the holiday season is the Toy Party, now in its 11th year but with some changes this season. goal this year to provide holiday toys for 5,000 children, receiving services from 21 Georgia non-profits serving children.

“Every year we try to do a little something different for our guests without getting too far away from the central focus,” says Alison Hall, the president of For the Kid In All of Us, Inc. “For the first time, we will have two of Atlanta’s hottest DJs, Vicki Powell and DJ Sed, spinning center stage to keep the party going, and we have silent auction finds for everyone, from restaurant deals to one-of-a-kind vacation experiences.” 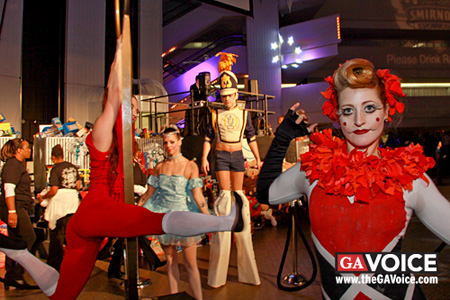 Hall says the Toy Party and Silent Auction has been the traditional holiday season centerpiece for the community for years. “Not simply because it’s the largest party, but because it has remained true to its roots. Since its inception 11 years ago the mission has always been a simple one – to bridge communities to brighten the lives of Georgia’s children in need.”

The Toy Party will be held on Sunday, Dec. 8 at the Americas Mart Building (see below for more details).

Another big party will be the Atlanta Gay and Lesbian Chamber of Commerce’s (AGLCC) Out in the Kitchen event, which combines a festive nature with food. According to Andria Towne,

AGLCC’s vice president, it’s the biggest event sponsored by the chamber save for their awards dinner in the fall. Out in the Kitchen was successful in its inaugural outing last year and will again feature bites at various chef stations.

“The events we have throughout the year are more about business and networking; this is about socializing and fun,” she says. Two chefs have been confirmed, Sean Shuter of the W Atlanta Midtown’s Spice Market (where the event is behind held) and Chef Patric Bell of The Barrelhouse. More chefs will be announced leading up to the Dec. 12 event, says Towne.

The Atlanta Executive Network (AEN) hosts its holiday party at the trendy new Henry’s on Dec. 5, blending socializing and a holiday raffle giveaway. Like the AGLCC holiday event, it will feature both members and non-members. “The festive spirit of Atlanta’s LGBT community always makes for a great and lively night, not to mention that Henry’s Midtown Tavern has become quite a hot spot in Midtown since it opened earlier this year,” says AEN spokesman Joshua Lorenz.

For music lovers, the Atlanta Gay Men’s Chorus will sponsor its annual holiday concert, its 33rd, titled “Seasons of Family,” on Dec. 6 and 7, while Atlanta Freedom Bands will stage their 20th anniversary “Holiday Spectacular” concert celebration December 21. The concert will include all of AFB’s performing ensembles: the Concert Band, the Marching Band, the MetroGnomes Stage Band, and the Color Guard.

Lovers of hairy men should check out the Southern Bears holiday party December 7 at the Phillip Rush Center with food and drinks, while Will Pollock’s ARTVision 8, “The Promise of Peace: Art Innovating Life,” is an artist’s collaboration in Old Fourth Ward with artwork for sale proceeds benefit Positive Impact, on Dec.13. Also part of the season is Charis Book’s Solstice Sale and Party (December 21) offers discounts on holiday goodies as well as free wrapping and cider and nibbles inside.

More holiday parties will inevitably emerge, as will plenty of New Year’s Eve festivities. Local promoter Barry Brandon, who knows how to throw a party, has already announced that his Bedlam is presenting the fourth annual Glitter and Fur Party New Year’s Eve, which promises to be a rowdy, packed event to send out the year with.

Wish List
Dec. 15, 6-9 p.m.
Fundraiser for Joining Hearts
Entry to the event is either a gift purchased from the 2013 Wish List for Jerusalem House and/or a gift card for a young adult at AID Atlanta ($25 minimum value for either option)
Complimentary hors d’oeuvres and cocktails
www.joininghearts.org