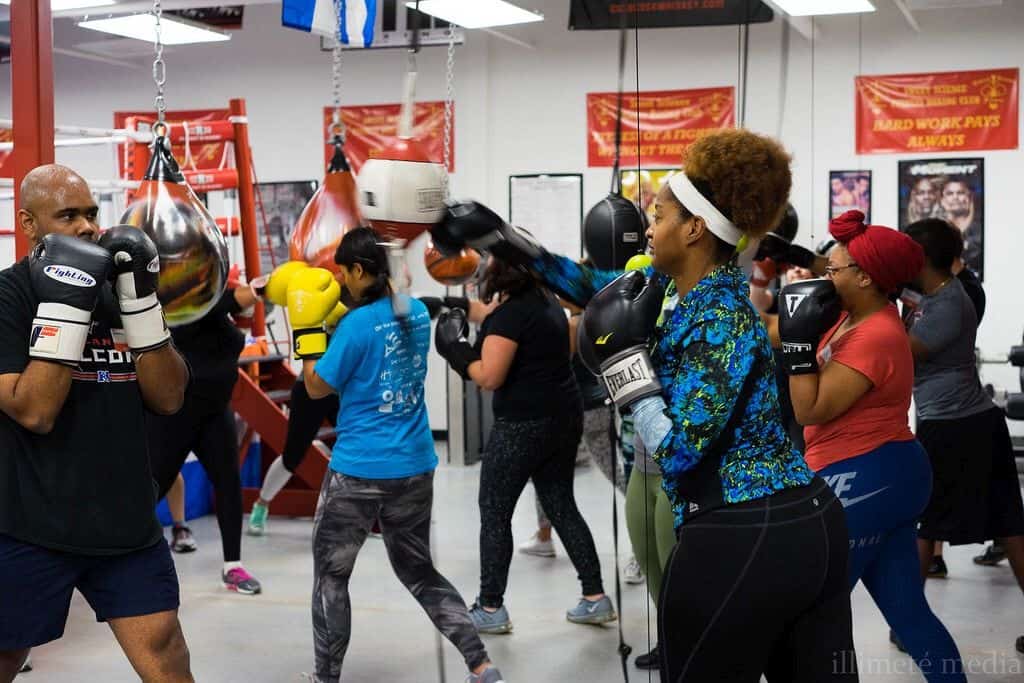 In a sprawling Buford Highway gym tucked between discount stores, men and women routinely shed their street clothes and transform into masters of the squared circle.

Sporting leggings and gym shorts, fancy athletic boots and plain old sneakers, they bob, weave, pounce and dance across the floor. Some huff and pant through the regimen, punctuating their effort with frequent breaks. Others seemingly feed on the challenge.

No matter their skill level or goals, one thing is certain, said gym owner and retired World Champion, Terri “The Boss” Moss: If you come to Buckhead Fight Club, you’ll get a workout your body won’t soon forget.

“It’s like strength conditioning, cardio and circuit training all at one time,” she said. “It combines every single thing you can do out there in one compact workout.”

Just as sure as January ushers in a new year, it also brings a glut of men and women hoping to get a head start on tightening and toning their way to the perfect beach bod. And while each year seems to bring a new fitness craze — from Zumba to trap yoga — gym owners say boxing is an old-fashioned sport that is not only surviving but growing in popularity.

They point to its convenience as a challenging activity that requires relatively little equipment, and its effectiveness as a full-body workout that’s not limited by age, weight or gender.

“You’re never going to overdo it — you’re not going to lift too much weight,” Moss said. “It uses only your own body weight, your own speed and your own power.”

Boxing your way to a sculpted physique is nothing new. Indeed, everyone from model Gigi Hadid to Lisa “Sulli” Sullivan, the guitar tech of Atlanta’s own Indigo Girls, has credited boxing with ripping their abs and even helping them rehab from serious injuries.

Interest in the sport is only going to rise in 2018, predicted Marty Hill, owner of Sweet Science Fitness Boxing Club in Chamblee.

“I believe 2018 is going to be a breakout year for boxing fitness,” he said. “It’s always been on the cusp.”

He pointed to the rising popularity of specialized fitness regimens that offer a more personalized touch than the group fitness typically offered at big box gyms.

“Boutique fitness is really big right now and boxing fitness ties into boutique fitness,” he said. “People realize now if you want to get real results you have to be more specialized.”

There are dozens of places to give it a try in and around the city, with offerings ranging from the largely clinch- and kick-based Muay Thai to underwater aqua boxing. The range of choices can quickly become overwhelming, so experts say knowing what you’re looking to get out of boxing is key.

And contrary to what many would-be participants think, you don’t have to fight anybody unless you want to.

The fitness routine is a little more Olivia Newton-John than “Rocky.” But it’s no less challenging.

A recent Thursday night found Moss and her team of trainers putting about 50 adults and kids through their paces in her high-energy, underground gym.

On rubber mats, a dozen men and women panted and grimaced their way through squats. Later, they headed to the bags for a rapid-fire punching session followed by still more floor drills.

Across the gym, a more advanced group mirrored Moss on a circuit that included zig-zagging through a maze of hanging punching bags. Next, they followed her to the ring, each taking turns trying to hit the sprightly 51-year-old’s padded palms.

A southern girl raised on fat-rich comfort food staples, EMT Lindsey Struck carried 255 pounds on her 5-foot-2-inch frame when Moss, who was training her wife, offered her a free trial at the gym.

“I was like OK she gave me a membership, I guess I’d better go,” said Struck, who despite playing softball and other sports, had maintained a larger frame.

She went on to drop 70 pounds and become a boxing convert.

“Your stamina and your endurance just totally increase to something you would never believe,” she said.

Moss said beginners should plan to train about three times a week. With regimens burning up to 200 calories a minute, Moss said it’s realistic to start looking for early results within two weeks.

Be very clear on your fitness goals and choose a gym with a record of accommodating those specific goals, Hill said.

“Are you looking to become a competitive boxer, are you looking to use boxing fitness for weight loss, conditioning and stress relief?” he said. “It’s really number one knowing exactly what you’re looking for and finding exactly the right environment that’s going to get you to your goals.”

As long as you are cleared for physical activity, you should be able to participate, though some doctors advise that you stick to shadow boxing only if you have arthritis.

Be ready to put in lots of sweat equity and enjoy the fruits of knowing you are taking care of yourself.

“Without your health, there’s not really a whole lot you can do for yourself,” Struck said. “It’s important because you’re the only you that you have.”