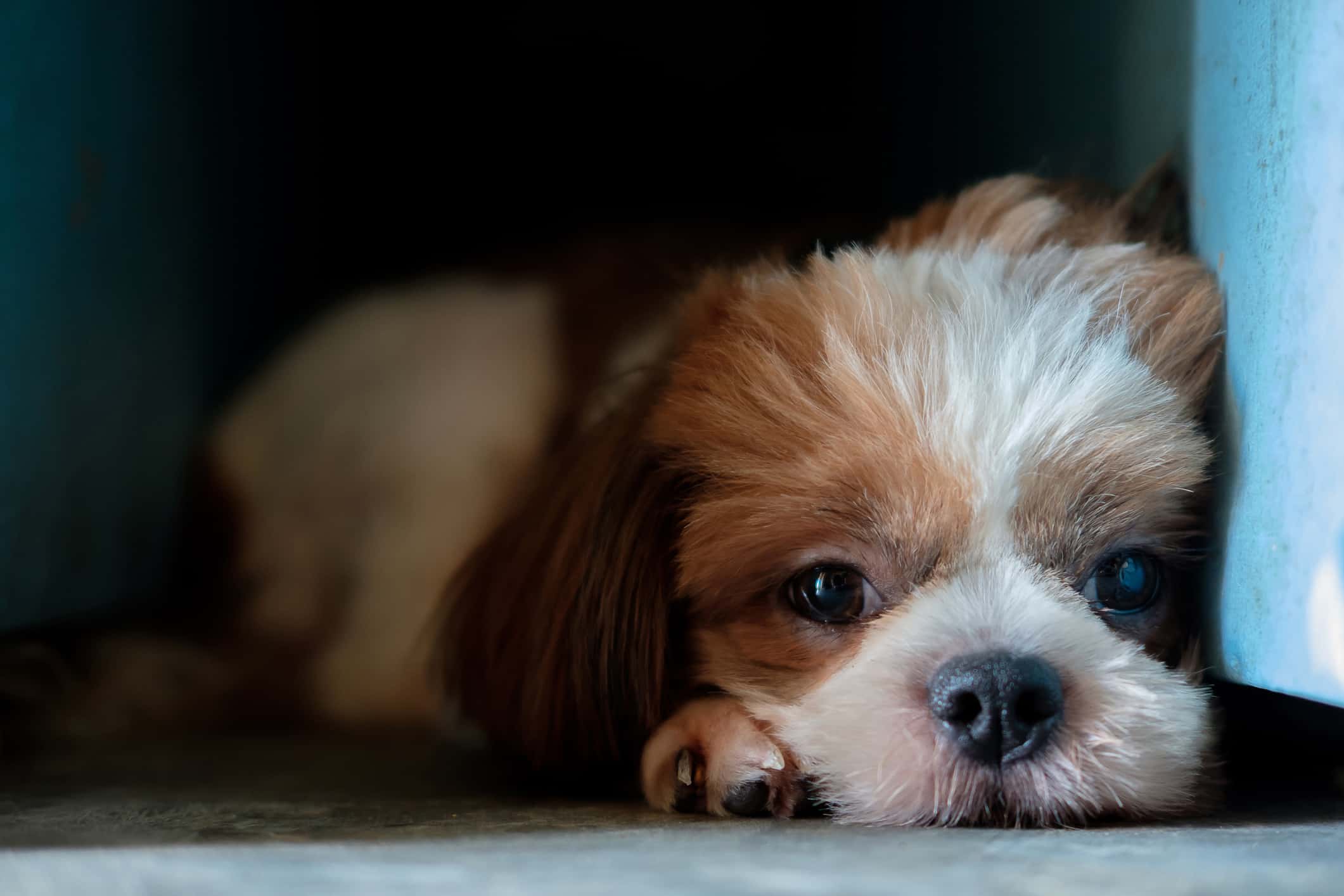 Pretty dog is lying in the dark corner and look forward.

Recognizing Stress in Our Little Buddies

The positive effect that pets can have on stress is well-documented. One need only curl up with a puppy after a hard day at work to experience the benefits firsthand. The effect of stress on your pets, however, isn’t always as obvious or understood, yet studies show stress is just as common among animals and can have negative impacts on their physical and mental health. As we enter peak season for moving into new houses, bringing home new babies, and other potentially stressful household changes, pet experts say it’s a great time to learn how to recognize and combat stress in your favorite furry friend.At the Atlanta Humane Society, Marketing Programs Manager Amanda Harris is a pro at spotting the many things that can trigger pet stress. In the shelter, it’s often new and unfamiliar faces that raise animal anxiety. In the home, she said triggers can include everything from a new roomie to redecorating.“A new piece of furniture even — something that seems so small and miniscule to us — can definitely impact an animal’s behavior and stress level,” she says. Reactive signs like snarling or growling are some of the most obvious symptoms of stress, but more subtle stress cues can include “calming reactions,” such as widened eyes, lip licking, and even excessive yawning, she explains.“We tend to put human feelings and emotions onto animals, so we look at an animal that’s panting and [think] they’re smiling,” Amanda adds. “Really, it could be a stress signal.”The good news is that pacifying your parrot or calming your chihuahua doesn’t necessarily have to involve drugs or behavioral therapy, Amanda says.If you can’t remove the stressor, she suggests enrichment activities like puzzle feeders which make animals interact for a food reward. A simple version might be a plastic toy egg with a little wet cat food inside, or a frozen Kong toy containing dog kibble.“It’s about getting them to use their brain,” she says. “That sort of activity can help reduce stress because the animal is thinking of something else.”Here are a few more ideas for ways to bring peace to your pet:AromatherapyBe they from scented candles or fragrant oils, aromas can soothe and settle both humans and animals. Lavender, universally known for its calming ability, is one that experts say can be particularly relaxing for stressed-out dogs. But take note: Essential oils that are safe for humans aren’t always safe for animals. Consult an aromatherapy practitioner or check out a book, such as “Holistic Aromatherapy for Animals” if you want to give this method a try. For a quicker fix, place a familiar toy or even an old shirt with your smell on it in your pet’s crate or carrier to produce feelings of calm.Create a hideawayCats in particular often feel most comfortable when they have a place to escape when the environment gets a little too stimulating. “Giving them a hiding spot is really, really beneficial for a cat’s behavioral health,” Amanda advises, adding felines are especially sensitive to environmental changes. Craft a vertical hideout by creating a wall-mounted stairway using floating shelves, or stack books and boxes near a tall armoire to create an easy way for your cat to get up high when they need to. Alternative medicineMeditation, crystal therapy, acupuncture — just about every type of alternative medicine available to humans is also practiced on pets. At Phoenix & Dragon, a Sandy Springs metaphysical book store that’s also home to five cats, owner Candace Apple offers calming amethyst crystals, animal-friendly music CDs, and flower solutions believed to reduce anxiety. “We carry Rescue Remedy and that works for animals too,” she informs. “You can put little drops in their water and that’s great when they’re going on a car trip.” She adds that the store kitties enjoy mellowing out to the animal-friendly reiki energy sessions offered there.Amanda stresses that it’s important that owners know when it’s time to talk to a pet behaviorist. Signs of that include an animal that’s becoming defensive, seeming afraid, or getting weird about eating.“If it escalates that far because of a stressor, it’s time to seek professional help,” she advises. “There’s no shame in asking for that help if you need it.”