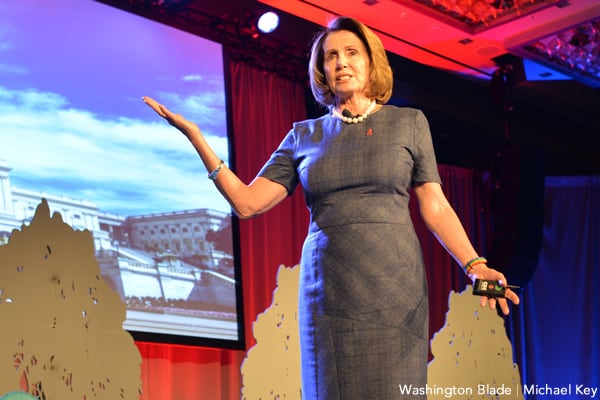 Amid uncertainty over whether House Minority Leader Nancy Pelosi (D-Calif.) will be elected speaker next year despite a Democratic majority in the House, a group of 102 LGBT leaders have come out to “enthusiastically endorse” her to become presiding officer of the chamber.

The leaders expressed support for Pelosi in a joint statement Friday asserting they “understand that the progress we have made is progress we must protect.”

Among the signers of the statement are Annise Parker, CEO of the Gay & Lesbian Victory Fund and former mayor of Houston; Chad Griffin, president of the Human Rights Campaign; and Jim Obergefell, the lead plaintiff in the case that led to the U.S. Supreme Court ruling in 2015 for same-sex marriage nationwide.

Parker said in a separate statement she’s endorsing Pelosi because the speaker of the House “must be someone of vision, tenacity and strength.”

“She must have an intimate knowledge of the working of Congress and run an efficient operation,” Pelosi said. “But most importantly, she has to understand the lives of everyday Americans. Nancy Pelosi fits the bill.”

The statement cites the enactment of new laws advancing LGBT rights when Pelosi previously was speaker during the Obama administration, such as the Matthew Shepard & James Byrd Jr. Hate Crimes Prevention Act and “Don’t Ask, Don’t Tell” repeal, as well as her efforts on behalf of the LGBT community as minority leader.

Pelosi has been a champion of the Equality Act, comprehensive LGBT rights legislation that would amend the Civil Rights Act of 1964 to include sexual orientation and gender identity, and has indicated advancing the measure would be a top priority with Democrats in control of the U.S. House.

Evan Wolfson, founder of Freedom to Marry, is also among the co-signers of the statement and signaled his backing of Pelosi in a separate statement.

“Whether delivering healthcare, jobs, and reform; championing civil rights, women’s rights and LGBT rights; or fighting for an economy that leaves no one behind, Nancy Pelosi has proven herself to be a strong, skilled and principled leader,” Wolfson said. “She knows how to make Congress work again — and we urgently need a working Congress to get our country back on track.”

Pelosi’s election as speaker is in serious question as numerous members of the Democratic caucus have publicly stated they won’t vote her as presiding officer. Rep. Seth Moulton (D-Mass.) has said he’d support for the role Rep. Marcia Fudge (D-Ohio). (Fudge is one of two Democrats who in the last Congress wasn’t a co-sponsor of the Equality Act).

In a statement Thursday, Fudge said she “would put my record of support for the LGBTQ community against anyone else’s,” but has declined to support the Equality Act because she doesn’t like the idea of opening up the Civil Rights Act to legislative action.

Another signer of the joint statement in support of Pelosi is Arizona State Rep. Daniel Hernandez, who gained notoriety for saving the life of former U.S. Rep. Gabrielle Giffords in mass shooting in 2011.

“At a time when the rights of the LGBTQ community are under constant assault by the Trump administration, we need a champion,” Hernandez said in a separate statement. “Nancy Pelosi is that champion. Her experience and ability to fight back make her the best choice for speaker.”