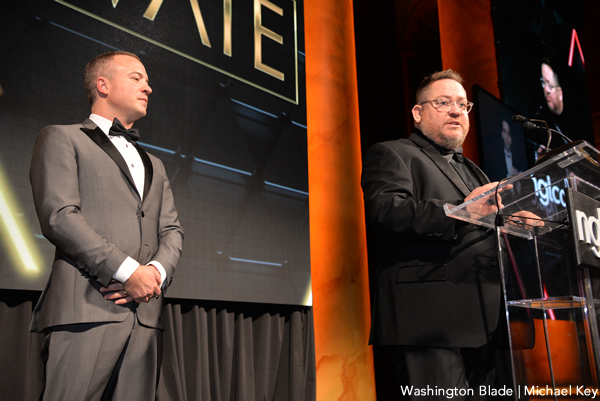 The National LGBT Chamber of Commerce and the global online food delivery company Grubhub announced on Sept. 22 that they have launched a $2 million grant program to provide financial support to struggling “LGBTQ+ owned and ally restaurants” adversely impacted by the COVID pandemic.

“America’s vulnerable LGBTQ+ owned restaurants and bars serving food will find a vital lifeline this fall stemming from the partnership formed by the National LGBT Chamber of Commerce (NGLCC) and Grubhub,” according to a joint statement they released.

“These small business owners have been among the hardest hit by COVID impact with loss of jobs and income over the past two years,” the statement says.

It says the newly launched Community Impact Grant Program is inviting restaurants and bars that qualify for the program to submit applications for grants up until Oct. 12, 2021, the closing date for the applications. The grants are expected to range from $5,000 to $100,000, the statement says, with NGLCC and its more than 50 affiliated LGBT chambers across the country playing the lead role in selecting which restaurants or bars are awarded the grants.

In a separate statement in response to a question from the Washington Blade, NGLCC said an LGBTQ-owned establishment such as a gay bar would be eligible to apply for a grant under the program if they offer a menu for serving food.

“They do not need to be licensed as a restaurant specifically to be eligible for consideration,” NGLCC said.

Among the D.C. gay bars that would fall into that eligibility category are Pitchers and its attached lesbian bar A League of Her Own, Uproar, and Nellie’s Sports Bar. Freddie’s Beach Bar in Arlington, Va. would also be eligible.

In the same follow-up statement to the Blade, NGLCC said it will determine whether an applicant qualifies for a grant as an LGBTQ ally by evaluating “the restaurant’s clientele, reach, track record of support, and public benefit.”

The statement adds, “In our application online, we ask allies to share evidence of their LGBTQ+ community support such as nonprofit sponsorships or advertising in local LGBTQ+ media, among others. We know that our allies are an important foundation standing by their LGBTQ+ patrons, neighbors, and friends.”

The statement announcing the launching of the LGBTQ grant program says the funds for the grants will come from a charitable program Grubhub started in 2018 called Grubhub’s Donate the Change program. It says the program asks customers receiving food delivered by Grubhub to “round out their order total and donate the difference,” with Grubhub matching eligible donations from its Grubhub+ members.

It says NGLCC has set a goal to allocate 30 percent of the funds for the Community Impact Grant Program for LGBTQ-owned and ally-owned restaurants and bars to businesses owned by people of color and transgender and gender non-conforming individuals.

“We’re proud to partner with Grubhub offering these grants to support these businesses,” said Justin Nelson, co-founder and president of the NGLCC, who noted that LGBTQ-owned and allied restaurants were among those who “kept our communities and first responders fed throughout the pandemic.”

Added Nelson, “America’s 1.4 million LGBTQ+-owned business owners have shown incredible resilience during the COVID-19 pandemic, and now, in turn, we can help them recover stronger than ever.”

The National LGBT Chamber of Commerce describes itself as the business voice of the community and “the largest global advocacy organization specifically dedicated to expanding economic opportunities and advancements for LGBT people.”