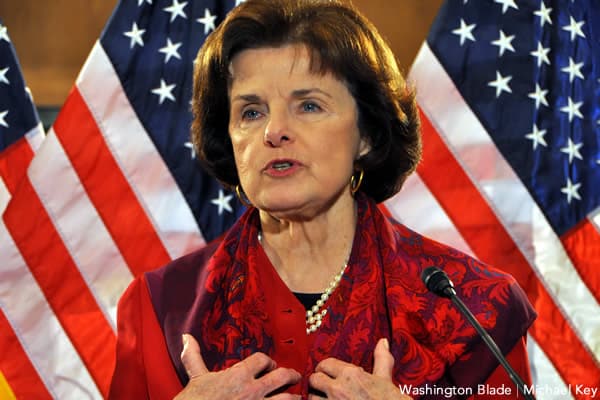 A group of 29 Senate Democrats led by Dianne Feinstein (Calif.) is calling on the U.S Office of Personnel Management to restore to its website guidance ensuring fair treatment of transgender federal employees, which was deleted during the week of Thanksgiving.

In a letter dated Dec. 19 to Acting OPM Director Margaret Weichert, the senators write “to express our serious concern” about removal of the guidance from the website.

“We request that you immediately make the guidance available online, so the managers, supervisors and employees are equipped with accurate information and fully understand their responsibilities in the federal workforce,” the letter says.

Among the 29 senators who signed the letter are Sen. Tammy Baldwin (Wis.), the only out lesbian in the U.S. Senate, and Sen. Patty Murray (D-Wash.), top Democrat on the Senate Health, Education, Labor & Pensions Committee.

But the Trump administration deleted that guidance from the OPM website the week of Thanksgiving. What replaces it is a 404 notice indicating “Page Not Found” on the OPM website.

The removal of the guidance is consistent with Trump administration efforts to exclude transgender people from federal initiatives and policy. Other such efforts include the transgender military ban, the revocation of Obama-era guidance assuring transgender kids can use the restroom consistent with their gender identity, a Justice Department memo excluding anti-trans discrimination from enforcement of Title VII of the Civil Rights Act of 1964 and the Department of Health & Human Services plan reported by the New York Times to limit the definition of “sex” in U.S. government policies to biological gender.

An executive order signed by President Obama in 2014 barring discrimination against transgender employees — as well as workplace discrimination both on the basis of sexual orientation and gender identity among federal contractors — remains in effect. Additionally, OPM recognized June as Pride month in a blog post asserting the importance of a federal workforce that is “aware, accepting, inclusive and respectful of our diversity.”

The senators urge OPM to “continue this commitment by making the original guidance supporting transgender employees available online in order to promote safe and positive workplace conditions across the federal government.” The letter also calls on Weichert to provide information on further actions she’ll take “to ensure the privacy and rights of transgender federal employees.”

The Washington Blade has placed a request with OPM seeking comment on the senators’ letter.