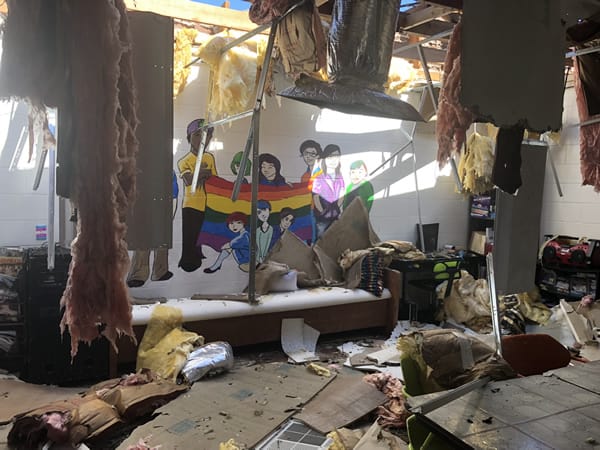 Members of the Florida Panhandle’s LGBT community are trying to pick up the pieces from Hurricane Michael that devastated the region earlier this month.

The LGBTQ Center of Bay County, which board secretary Cherie Crim described to the Washington Blade on Monday during a telephone interview as Bay County’s “first safe space” for LGBT youth, rented a room at an Episcopal church in Panama City.

Michael destroyed a portion of the church’s roof. Pictures that Crim sent to the Blade also show several large trees fell into the side of the church during the hurricane.

“Our center really took a hit,” she said.

Crim told the Blade she and her colleagues have “salvaged everything that we could” from the church. She also said one of the LGBTQ Center of Bay County’s leaders held a youth group meeting at their home on Monday.

“We want to get the center up as fast as we can,” said Crim. “We want to be able to get things back up to the way they were, but it will take time.”

Michael had winds of 155 mph when it made landfall in Mexico Beach, which is roughly 20 miles southeast of Panama City, on Oct. 10. Hurricane Michael caused widespread damage in Panama City, Fla., when it made landfall in the Florida Panhandle on Oct. 10, 2018. (Photo by Melanin Manreaux)

Damage was less widespread in Panama City Beach, a popular tourist destination that is roughly 10 miles west of Panama City. Michael caused some tidal flooding in Destin and in Pensacola Beach, but reports indicate damage was minor.

China Moon is a drag queen who performs at Splash Bar Florida, a gay bar in Panama City Beach.

She, her partner and two of their her best friends who live in the same mobile home park in Panama City’s St. Andrews neighborhood evacuated to Alabama before Michael.

Moon told the Blade last week during a Facebook Live interview that she, her partner and one of their best friends returned to Panama City on Oct. 11, the day after the hurricane made landfall. Moon said one of their mobile homes “was a total loss” and they could not reach hers because there were “too many trees down” on the street.

“The third was accessible,” she said. “So, we as a group have all moved in there.” Melanin Manreaux is another drag queen who has performed at Splash Bar Florida.

She lives in Abbeville, Ala., which is two hours from Panama City, with her husband and daughter. Manreaux’s parents’ home is in the Panama City suburb of Lynn Haven.

Manreaux told the Blade on Oct. 19 during a Facebook Messenger interview that her parents boarded up the windows of their Panama City home and “prepared” for Michael, but chose not to evacuate. Manreaux said her parents were “okay” after Michael, even though it “destroyed” their home.

Manreaux on Monday told the Blade her parents and other relatives had been living in what she described as “FEMA-sponsored suites” in a high-rise condominium building in Panama City Beach.

Manreaux said they are now living in a hotel room because the condo’s board “kicked my parents and a bunch of my family members and others out.” A local television station reported an eviction notice was issued on Oct. 16 because of “recently discovered water damage throughout the building.”

Manreaux saw her parents’ home on Monday for the first time since Michael made landfall.

“I’m having a hard time keeping it together,” said Manreaux. “I’m glad my daughter is at school and doesn’t have to see this.”

Brandon Wolf, a Tallahassee-based activist who survived the Pulse nightclub massacre in 2016, told the Blade last week during a telephone interview from his home that roughly half of his Starbucks colleagues in Panama City are currently homeless because of Michael.

Wolf and his colleagues brought employment applications, cell phones, water, portable WiFi hotspots and “whatever we could bring” to Panama City in the days after the hurricane made landfall. Wolf said they did not try to go to the area around Tyndall Air Force Base, which is between Panama City and Mexico Beach, because the damage was too extensive.

“I recognize the signs of shock and trauma from my own experience with it,” Wolf told the Blade as he discussed his experience in Panama City after Michael. “It was almost as though they couldn’t acknowledge they were a person in need. Fifty percent of the people we talked to are homeless.” Hurricane Michael destroyed the second floor of Melanin Manreaux’s childhood home in Lynn Haven, Fla., when it made landfall in the Florida Panhandle on Oct. 10, 2018. Manreaux, who lives in Alabama, has performed in the area. (Photo by Melanin Manreaux)

Michael killed at least 36 people: 26 in Florida and another 10 in Georgia, South Carolina, North Carolina and Virginia.

Reports indicate Michael caused billions of dollars in damage throughout the Southeast. Western Cuba experienced heavy rains and strong winds before Michael moved into the Gulf of Mexico and strengthened.

Gulf Power, which is the Panhandle’s utility company, on Monday said 17,711 of its customers remain without electricity. Wolf, Crim and Moon all said cell phone reception and Internet access remains spotty in the region.

Tallahassee Mayor Andrew Gillum, a Democrat who is running against former Congressman Ron DeSantis to succeed Florida Gov. Rick Scott, has said most residents of his city, which is roughly two hours east of Panama City, have had their electricity restored. Gillum’s campaign is also accepting donations for Michael victims at its offices across the state.

Equality Florida CEO Nadine Smith, who grew up in Panama City, noted high rates of poverty in the Panhandle will make post-Michael recovery difficult for many residents.

“It’s not a wealthy area,” Smith told the Blade last week, referring to the areas of the Panhandle that Michael devastated.

Smith said she has not heard of any reports of discrimination based on sexual orientation and/or gender identity at shelters or at distribution centers in the Panhandle. Manreaux expressed frustration and outrage over her family’s post-Michael housing situation.

“I have a large family in PC (Panama City) that was hit extremely hard,” she told the Blade on Monday. “And to know that they were evicted from the residences that they were given as emergency housing infuriates me.”

Wolf added people in the Panhandle who are poor have been impacted more directly by the hurricane than those with higher incomes.

Wolf and Moon both noted many people simply could not afford to evacuate before Michael. Wolf also told the Blade that many of the damaged homes he saw in Panama City were built before the area’s stronger building codes took effect.

“I saw so many mobile homes when I was there that were tossed around like match sticks,” he said. Hurricane Michael caused widespread damage in Panama City, Fla., when it made landfall in the Florida Panhandle on Oct. 10, 2018. (Photo by Melanin Manreaux)

Moon said she and her colleagues are doing the best they can to start recover from Michael.

She and two other drag queens from Splash Bar Florida on Oct. 19 performed at a gay bar in Dothan, Ala., in order to make money they could use to purchase gas for their generator and other supplies. Moon said a patron gave each of them $100.

“For us to get out of the devastation of the city and to see some normalcy it was very therapeutic,” she told the Blade on Sunday night.

Moon nevertheless said most of Splash Bar Florida’s 10 employees are struggling after Michael, in part, because they live paycheck to paycheck.

“Honestly, we are blessed compared to some others,” she said. “So, we have been giving back and helping where we can.”