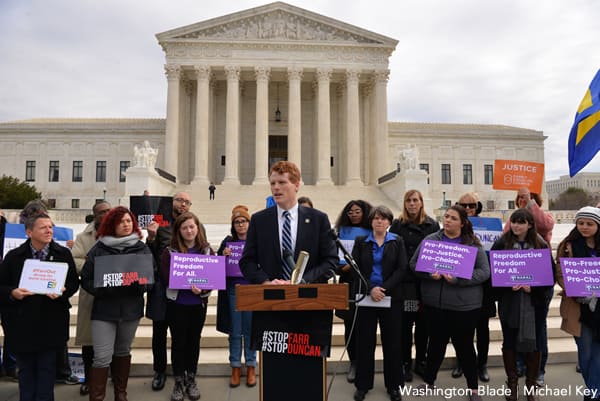 In the wake of an explosive media report in the New York Times indicating the Trump administration is preparing a proposal to define transgender people out of existence, a group of 98 House Democrats led by Rep. Joseph Kennedy III (D-Mass.) are speaking out to urge the Department of Health & Human Services not to implement the proposal.

In a letter to Secretary of Health & Human Services Alex Azar dated Nov. 2 and obtained by the Washington Blade, House Democrats say the reported plan — which would interpret definition of “sex” under federal non-discrimination laws to exclude transgender people — would amount to “abandoning their right to equal access to health care, housing, education and fair treatment under the law.”

“Adoption of this cruel and unscientific definition of sex would undermine enforcement of civil rights for millions, and we implore you to stop any attempt by extremists within the Department of Health & Human Services to infringe upon the dignity, rights and lives of transgender people,” the letter says.

The letter is the latest objection to the proposed plan reported last week in the New York Times, which sparked a firestorm of indignation among transgender people and their supporters. Just yesterday, 56 major companies went public with a joint statement declaring their opposition to the intiative.

House Democrats detail in the letter the harm they foresee for transgender people if the Department of Health & Human Services implements the reported proposal. Additionally, the letter’s co-signers point out the plan would defy decades of case law finding transgender people are protected under federal law as well as the determinations of the medical community.

“Under this proposal, it is possible for a transgender person to be denied access to medical care or health insurance or be refused access to emergency shelter or public housing, and transgender children could be denied access to public education,” the letter says. “This leaked proposal makes it clear members of this administration are willing to disregard the established medical and legal view of transgender rights and lives to solidify an archaic, dogmatic and alarming view of the world.”

The Department of Health & Human Services has previously had no comment on the reported proposal and falsely blamed President Obama amid the firestorm that ensued after it was reported.

Caitlin Oakley, an HHS spokesperson, repeated those views in a response to the Washington Blade’s request to comment on the letter.

“We do not comment on alleged, leaked documents that purport to indicate the status of deliberations or the focus of the department,” Oakley said. “The Obama administration’s broad definition of ‘sex’ was enjoined by a federal court on a nationwide basis in December 2016 and the Obama administration did not appeal. That court found that the Obama administration regulation was overbroad and inconsistent with the text of the 1972 Title IX law prohibiting discrimination on the basis of sex. The court order remains in full force and effect today and HHS is bound by it as we continue to review the issue. Everyone deserves to be treated with respect and HHS’s Office for Civil Rights will continue to vigorously enforce all laws as written and passed by Congress, prohibiting discrimination in healthcare on the basis of race, color, religion, national origin, sex, age, and disability.”