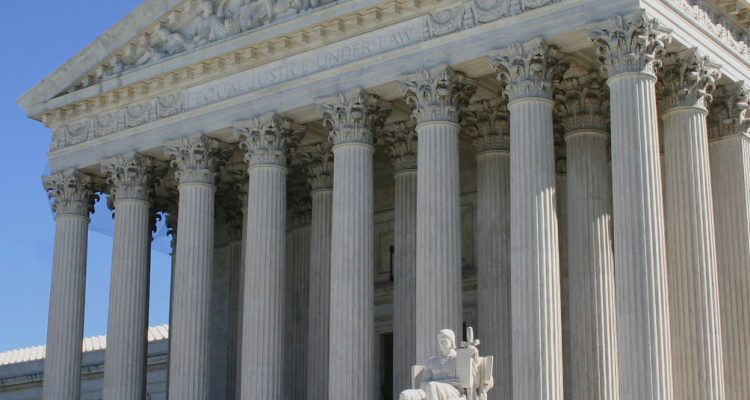 The U.S. Supreme Court ruled that the Constitution “does not prohibit” states from banning abortion. / "US Supreme Court" by dbking is licensed under CC BY 2.0.

In a ruling that one legal activist said will put LGBTQ rights “on the chopping block,” the U.S. Supreme Court today (June 24) ruled 6 to 3 that the U.S. Constitution “does not prohibit” states from banning abortion.

A concurring opinion from Justice Clarence Thomas underscores that alarm for LGBTQ people. In it, Thomas urges the court to “reconsider all of this Court’s substantive due process precedents, including Griswold, Lawrence, and Obergefell.” Lawrence struck down state bans against same-sex sexual relations; Obergefell struck state bans against marriage for same-sex couples; and Griswold struck bans against couples using contraceptive.

“As Justice Thomas’s concurrence makes clear, we must face the reality that the precedents that have transformed the place of LGBTQ people in our society are now in the crosshairs of this reactionary Court, which has no regard for precedent and no commitment to protecting civil liberties,” said Shannon Minter, legal director for the National Center for Lesbian Rights. “We are on notice that our rights are on the chopping block, and we should not waste a moment in mobilizing political support. If we cannot rely on the Supreme Court, we must turn to our local, state, and federal representatives to secure fundamental freedoms through legislation. We are witnessing a full-scale assault on the rights of women and LGBTQ people, and the moment to act is now.”

The 6 to 3 decision came in Dobbs v. Jackson, a case in which an abortion clinic challenged a new law in Mississippi that banned abortion at any time after 15 weeks, unless there is a medical emergency or severe fetal abnormality.

In language that is overtly dismissive of concern for how the decision will impact other rights, Justice Samuel Alito, writing for the majority, says that these considerations are “too much” and lack “any serious discussion.”

“These attempts to justify abortion through appeals to a broader right to autonomy and to define one’s ‘concept of existence’ prove too much,” wrote Alito, who was joined on the majority opinion by Justices Clarence Thomas, Neil Gorsuch, Brett Kavanaugh, and Amy Coney Barrett. Chief Justice John Roberts did not sign onto Alito’s decision but issued his own opinion, concurring in the judgment.

Alito does little to quell concern that the decision will impact these other rights.

He says the majority has “stated unequivocally that “[n]othing in this opinion should be understood to cast doubt on precedents that do not concern abortion,” adding that abortion involves taking a “potential life,” while the decisions in the other cases do not. But then he adds this:

“Each precedent is subject to its own stare decisis analysis, and the factors that our doctrine instructs us to consider like reliance and workability are different for these cases than for our abortion jurisprudence,” said Alito. Given that the Dobbs decision analysis of stare decisis (respect for precedent) overturns the 50-year-old Roe v. Wade decision, this reassurance falls empty. Obergefell v. Hodges, striking state bans on same-sex marriage, was issued only seven years ago. Lawrence v. Texas, striking state bans on consensual sex between same-sex adults, was issued only 19 years ago.

Adding to that concern, Justice Thomas’ concurring opinion (see page 3) urges the court “reconsider all of this Court’s substantive due process precedents,” including Griswold, Lawrence, and Obergefell. He states that the court has “a duty to ‘correct the error’ established in those precedents….”

Generally, judges and justices are expected to keep pre-conceived ideas of how a case might be decided to themselves. But Justice Brett Kavanaugh appears to abandon that protocol, too. In his concurring opinion, he includes a footnote (page 8) that says Obergefell “overruled” Baker v. Nelson.

“Much of American society was built around the traditional view of marriage that was upheld in Baker v. Nelson, and that was reflected in laws ranging from tax laws to estate laws to family laws. In Obergefell v. Hodges, the Court nonetheless overruled Baker.

“This is the most shockingly activist Court we have seen in any of our lifetimes,” said Jenny Pizer, senior legal counsel for Lambda Legal. “The arrogantly selective reading of history and disdain for generations of jurisprudence would be bizarre if it weren’t so terrifying.”

In the majority opinion June 24 in Dobbs, the court does overturn two major precedents: Roe v. Wade and Planned Parenthood v. Casey. Roe v. Wade, in 1973, said the Constitution implies that citizens have a right to privacy and liberty and that those rights cover the right to choose an abortion. Planned Parenthood v. Casey, in 1992, said states could regulate abortion once a fetus becomes viable as long as the regulations did not create an undue burden to women who seek an abortion.

In his opinion concurring in the judgment of the majority, Chief Justice John Roberts says he sees “no sound basis for questioning the adequacy” of 15 weeks for a woman to obtain an abortion. He chose not to sign onto Alito’s opinion apparently because, as he said, “its dramatic and consequential ruling is unnecessary to decide the case before us.”

“The Court’s decision to overrule Roe and Casey is a serious jolt to the legal system—regardless of how you view those cases,” writes Roberts. “A narrower decision rejecting the misguided viability line would be markedly less unsettling, and nothing more is needed to decide this case.”