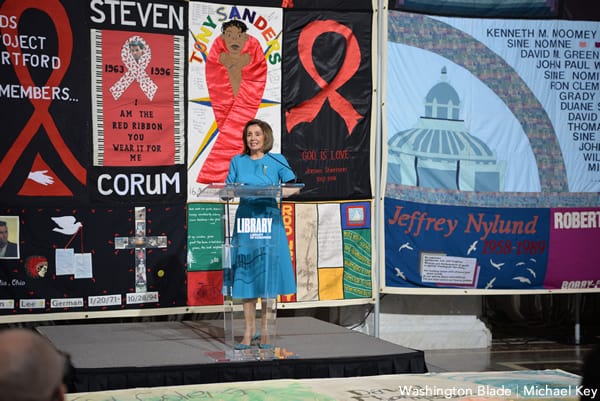 The Atlanta-based Names Project Foundation, which has served as the custodian of the massive AIDS Memorial Quilt since 1987, is turning over that task to the San Francisco-based National AIDS Memorial, officials with both organizations announced at a Washington ceremony on Wednesday.

The officials, who were joined by U.S. Speaker of the House Nancy Pelosi, also announced that the two organizations have agreed to donate the “care and stewardship” of the Quilt’s large archival collection of artifacts and documents to the Library of Congress’s American Folklife Center in Washington.

A joint statement released by the foundation and the National AIDS Memorial says the Quilt currently consists of over 50,000 individual 3-by-6 foot memorial panels commemorating more than 105,000 people who have died of AIDS since the start of the epidemic in the early 1980s.

“This historic decision will return The Quilt to the San Francisco Bay area, where 32 years ago during the height of the AIDS epidemic, a group of strangers gathered at a San Francisco storefront to remember the names and lives of their loved ones they feared history would forget – and with that seemingly simple act of love and defiance, the first panels of The Quilt were created,” the statement says.

“This is the culmination of decades of work that achieves a vision long held by The Names Project leadership who, armed with an unwavering commitment to The Quilt, were determined to see that the AIDS Memorial Quilt would stand the test of time,” said Julie Rhoad, president and CEO of the Names Project in the joint statement. “With this set of new caretakers, we are confident that the legacy of The Quilt and the Names Project is secure,” she said.

The ceremony in which the AIDS Memorial Quilt changes were to be announced was scheduled to take place Wednesday morning in the Great Hall of the Library of Congress’s main building across the street from the U.S. Capitol.

The Gay Men’s Chorus of Washington, D.C. and Broadway performer Glenn Rainey were scheduled to sing during the event.

“The mission of the National AIDS Memorial is to provide, in perpetuity, a place of remembrance so that the lives of people who have died from AIDS are not forgotten and the story is known by future generations,” the memorial’s website says.

“In 1996, through legislation signed by President Bill Clinton, it was federally designated a national memorial,” the website says.

The Names Project Foundation’s website says the foundation has been in charge of caring for and displaying the AIDS Memorial Quilt since its founding in 1987. It notes that in October 1987, the Quilt’s first 1,920 panels were displayed on the National Mall in D.C., where a half million people came to see it.

An estimated 1.2 million people visited the Quilt when it returned to Washington in October 1996 and covered the entire National Mall from the Washington Monument to the grounds of the U.S. Capitol, the foundation states.

The foundation notes on its website that in 2000 its Board of Directors elected to move its national headquarters and the Quilt to Atlanta, and the move was completed in December 2002.

“The American Folklife Center at the Library of Congress will become the new home for the National AIDS Memorial Quilt Archive in 2020,” the joint statement says. “This archival collection currently totals more than 200,000 items. It includes biographical records, correspondence, photographs, tributes, epitaphs, news clippings and artifacts submitted by panel makers that add context about the lives memorialized on The Quilt panels,” it says.

“The Library of Congress is proud to serve as the home of the National AIDS Memorial Quilt Archive to preserve its legacy and give the memorial a home on both the East Coast and West Coast,” said Librarian of Congress Hayden.

More details about the Quilt can be found at AIDSmemorial.org.