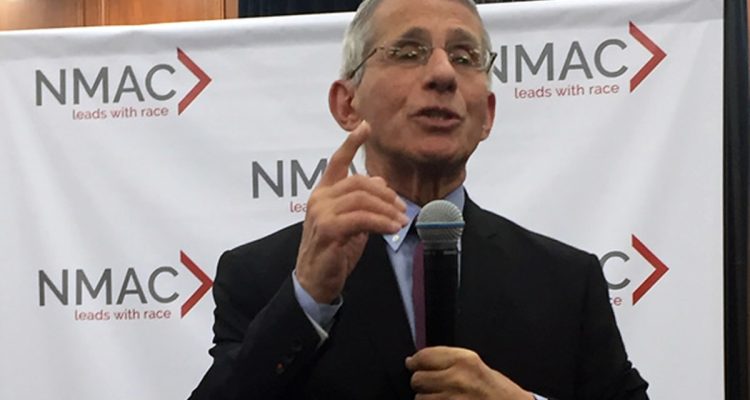 Anthony Fauci has confirmed plans to retire from the U.S. government by the year's end. (Washington Blade file photo by Lou Chibbaro Jr.)

Anthony Fauci, a leading epidemiologist who advised seven presidents and had a major role in the HIV/AIDS and COVID epidemics, has confirmed plans to retire from his role in the U.S. government.

Fauci, the longtime director of the National Institute of Allergy & Infectious Diseases and now chief medical adviser to President Biden, signaled he plans to retire in December in a statement Monday.

Fauci, however, is quoted in the New York Times as saying he’s “not retiring in the classic sense” but would devote himself to traveling, writing, and encouraging young people to enter government service.

“So long as I’m healthy, which I am, and I’m energetic, which I am, and I’m passionate, which I am, I want to do some things outside of the realm of the federal government,” Dr. Fauci was quoted as saying, reportedly adding he intends to draw on his experience in public health and public service to “hopefully inspire the younger generation.”

As noted in The New York Times, the announcement from the 81-year-old Fauci wasn’t unexpected because he had been hinting for some time he was thinking of stepping down.

Fauci, a leader in the U.S. government response to the coronavirus pandemic, was seen as a major antagonist of former President Trump’s, who was criticized for downplaying the threat of the disease — and even outright lying about its danger to the American public. In turn, Fauci drew the ire of conservatives, who blamed him for making Trump look bad and for the lockdown policies they opposed.

The gay community also remembers Fauci for the lead role he took in development of treatment for HIV/AIDS during the height of the epidemic in the 1980s. Although Fauci was once among the targets of protest groups like ACT UP, he later became close friends with now deceased activist Larry Kramer.