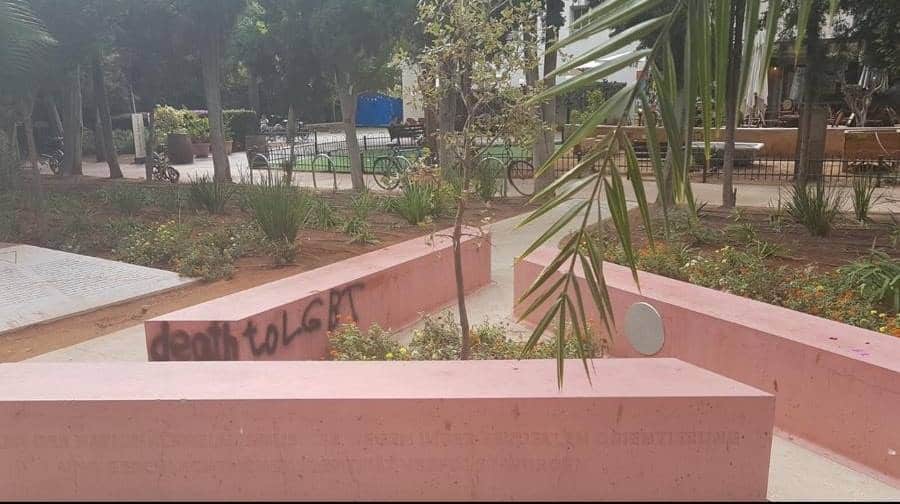 A Holocaust memorial monument in Meir park in Tel Aviv was found spray-painted with the words “death to LGBT,” reported the Jerusalem Post.

The monument was known to honor the people who were persecuted by the Nazi regime due to their sexuality. The monument was designed as a pink triangle, reminiscent of the symbols gay people were forced to wear in concentration camps during the holocaust.

Tel Aviv mayor, Ron Huldai, posted the image of the graffitied monument on Facebook, stating that it would be removed. The mayor’s Facebook post translates, “Condemns the vandalism and memorial in memory of the proud community members of the Holocaust. I was instructed to immediately delete the graffiti.”

“We will continue to act and protect the members of the community as we have done so far,” the post continues.

Mayoral candidate, Asaf Zamir, expressed on Twitter his shocked feelings of the crime and hoped the police find the perpetrators and bring them to justice. His tweet said, “I have no words to describe the feeling of aversion to anyone who thinks that he can threaten the members of the proud (LGBTQ) community.

The monument was inaugurated at Meir Park in 2014. Homosexuality was classified as a felony under the Third Reich (Paragraph 175 of the criminal code).

The Gestapo (Secret State Police) established the Reich Central Office for the Combating of Homosexuality and Abortion to erase any “indecent” acts that would hinder the expansion of the German population. The Gestapo founded an anti-homosexual unit that kept lists of nearly 100,000 names of people who were alleged members of the LGBT community. Between 5,000 to 15,000 homosexual men were sent into Nazi concentration camps.

The chairman of Tel Aviv’s LGBTQ community center, Etai Pinkas, said he sees the event as a reminder that the LGBTQ community must “continue to fight for our security and equality.”

“So for those who thought we were exaggerating, that everything in Tel Aviv was wonderful, I am in the heart of the city, in the Meir Garden near the Pride center I built a decade ago,” Pinkas stated about the city’s pride. “We will not give up our rights; we will continue to fight for our security and equality.”

The graffiti has been removed and an investigation opened to find the person or group behind the crime. Zamir told the Post, “I have no words to describe the feeling of aversion to anyone who thinks that he can threaten the members of the proud [LGBTQ] community.” The Deputy Mayor continued, “I will continue to support community members and to work actively for their freedom and rights.”