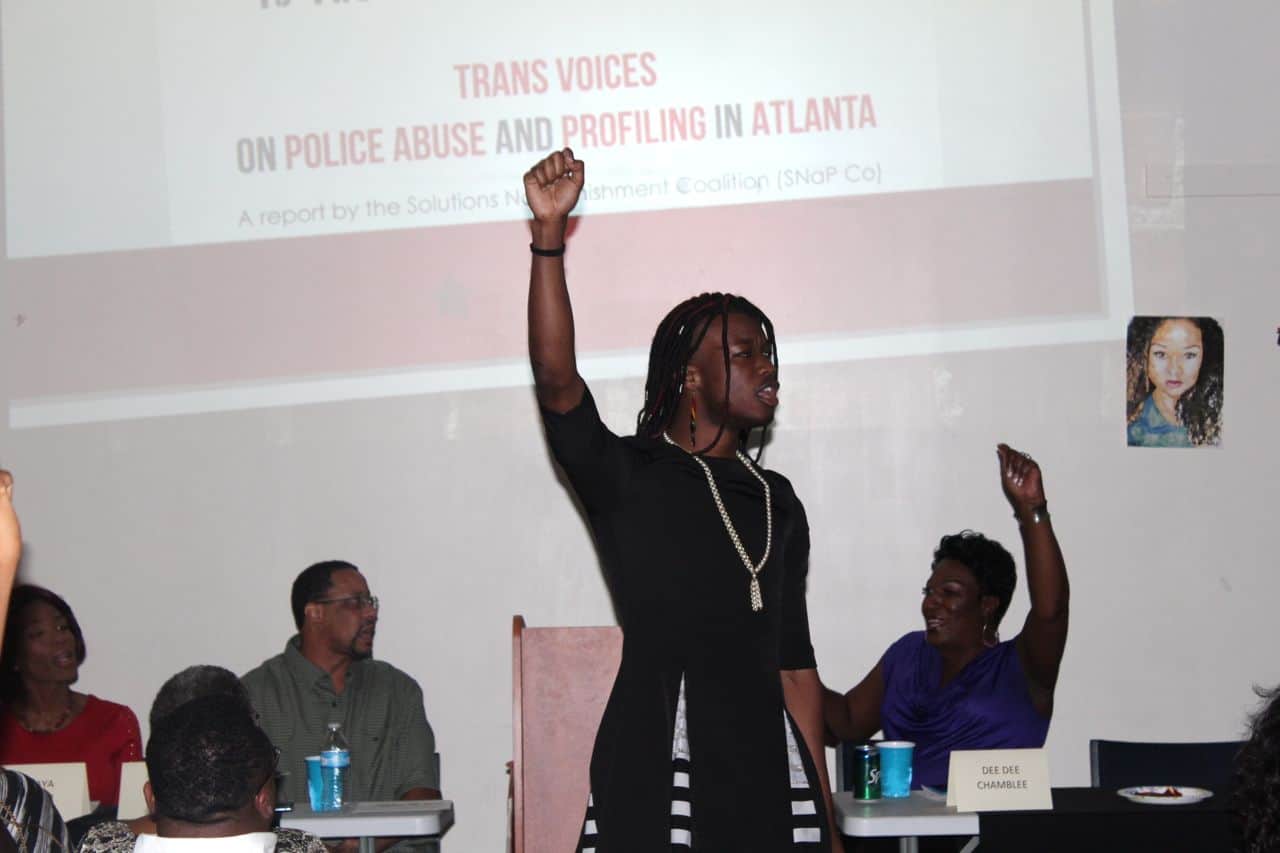 It was standing room only at The Phillip Rush Center Annex on Thursday for the annual Trans Day of Visibility observance. Over 100 people turned out to hear the results of a survey spearheaded by Solutions Not Punishment (SNaP Co) on the interactions of the Atlanta Police Department with the trans community.

“The Most Dangerous Thing Out Here Is The Police: Trans Voices on Police Abuse and Profiling in Atlanta,” is an official report highlighting the experiences of trans and gender non-conforming individuals with the Atlanta Police Department (APD).

SNaP Co surveyed over 88 members of the trans community on their interactions with the APD and discovered an alarming amount of verbal and physical harassment, unwanted sexual contact and the deliberate use of the incorrect pronoun when addressing trans individuals.

“People come to Atlanta because they want to get free. They want to have an opportunity to have a better life,” says Toni-Michelle Williams, SNaP Co’s Trans Leadership Connection Internship Coordinator.

A panel of eleven trans and gender non-conforming individuals were present to publicly share their experiences and lack of trust in the APD to ensure their safety, echoing SNaP Co’s call in their report for a complete overhaul of the culture, policies and practices of the APD.

According to Williams, over thirty invitations were sent to the APD to attend last night’s event and each invitation went unanswered. However, community leaders and allies from across the city were present, including newly elected queer state representative Park Cannon for House District 58 and Robin Shahar, LGBT Liaison to Mayor Kasim Reed.

The importance of having city leaders and lawmakers in the room was an important first step in repairing the fractured relationship between the APD and Atlanta’s transgender community.

“It’s not often that we get over 100 people in a room or our elected representatives to hear our stories as trans folks of color,” said Williams.

“Change begins with culture. It’s about the police department being educated about who we are and how to protect us,” said panelist and transgender advocate Simaya Turner.

SNaP Co has issued a call to action that includes, but is not limited to: the decriminalization of sex work, an investment in job training and placement for trans individuals and a pre-arrest division program, all of which is aimed at reversing the dangerous trend of APD interaction with the trans community.

Here are some key statistics from SNaP Co’s report: