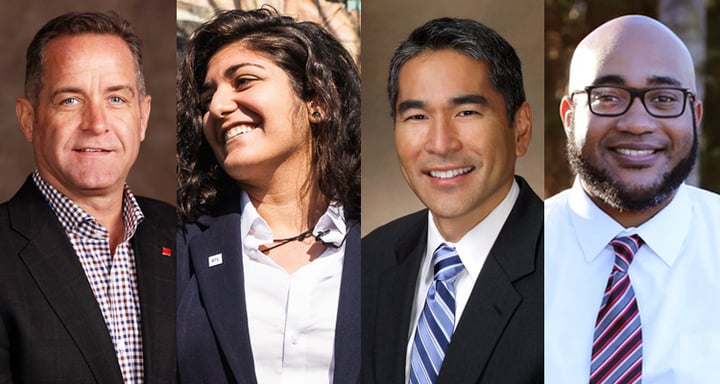 Local governments handle the roads you drive on every day, development in your neighborhood and whether or not you can have backyard chickens. Atlanta’s next big local election takes place this November, when there will be changeover in both the mayoral office and its city council. Each of the 12 city council districts has someone running, and there are three at-large posts up for grabs as well.

But when you live in a city like Atlanta, where there are dozens of neighborhoods and 26 neighborhood planning units, the boundaries of which don’t always line up with those of city council districts, how do you know who you can vote for?

Georgia Voice delved into the latest campaign disclosures of candidates for each of the districts, and clarifies which is yours.

Numbers shown here were pulled from campaign contribution disclosure reports submitted between June 28 and July 15. Use the CTRL+ on your PC or Command+ keys on your Mac to zoom in on maps.

Smith has four challengers for her spot, including openly gay candidate Bill Powell.

District 4 is represented these days by Cleta Winslow. Winslow is running for re-election in November, but has not reported any monetary donations — just in-kind. Jason Dozier, who lives in the Mechanicsville neighborhood, raised the most so far in 4.

Natalyn Mosby Archibong is running for her fifth term, but openly LGBT candidate Liliana Bakhtiari is hot on her heels. Bakhtiari disclosed campaign contributions of just shy of $30 less than Archibong as of the July filing.

District 6 will have new representation after this election, as longtime Councilman Alex Wan seeks higher office. Two LGBT individuals seek to fill the seat of openly gay Wan — Kirk Rich and Lock Whiteside. Rich raised about $96,000 so far, the most of 6th candidates, but is followed by lawyer Jennifer Ide. Whiteside disclosed $245 in monetary campaign contributions thus far.

Dustin Hillis looks to be a strong contender for the next council member representing District 9 — the other candidates did not disclose any campaign contributions.

One of seven newcomers will take over for Keisha Lance-Bottoms. Leading the fundraising right now is Marci Overstreet.

Joyce Sheperd raised more than $100,000 already to represent District 12 for a fifth term. She’s got four challengers, but none are quite at that level yet.

In addition to the 12 districts, the Atlanta City Council has three at-large posts, right now represented by Michael Bond, mayoral candidate Mary Norwood and Andre Dickens. Both Bond and Dickens look to maintain their positions, but only Dickens is running unopposed. In fact, candidate Courtney English has almost $100,000 more than Bond raised in hopes of replacing him. Matt Stephens Westmoreland received more than $140,000 in his race to win Norwood’s vacated spot.

What would it be like if Atlanta had a gay mayor and a gay city council president? It’s a definite possibility, as Wan has the most dollars in so far to lead the council, and out mayoral candidate Cathy Woolard isn’t broke either. Laban King is also an openly LGBT mayoral candidate.

Fellow council members Clarence Martin and Felicia Moore are in the running against Wan. All Atlantans, regardless of which neighborhood they reside in, will be able to vote for the Atlanta council president.