Vendors were running out of materials early on Saturday, an indicator of a heavy turnout, Freedman explained. Financial information on how much vendors made won’t be available for another 60 days, he added.

“We have heard from vendors that many of them ran out of items in their booth on Saturday and had to totally restock on Sunday morning before the parade and several vendors ran out by the end of the day on Sunday,” Freedman said.

One of the most popular vendors was the free HIV testing being provided. The Ric Crawford Clinic and Positive Impact joined forces to provide free testing at Atlanta Pride this year and over the course of the weekend tested approximately 1,000 people. People were lined up at the tents waiting for the half-hour or longer process.

Asen Herndon, 20, of Kennesaw, who is gay, said he wanted to take advantage of the free HIV testing and was appreciative to have testing made available during Pride.

“Because I want to make sure I’m safe. I haven’t tested since last year,” he said while waiting for his results.

“I love it,” he said about having testing at Pride. “Free is always good. But you can’t put a price on being safe.”

Also waiting for his test results was J.J. Moore, 19.

“I really don’t get tested often because I haven’t had sex … but Atlanta is known for HIV or AIDS and anywhere someone can go get it done for free is good,” he said about the free testing at Pride.

Freedman said the large crowds of people made it difficult to help people move out of the market place.

“That just shows how strong the attendance was on Saturday and Sunday this year. The amount of folks in the park this year was so high — which was great to see the support — throughout the entire day and evening on Saturday and Sunday that we had to wait and slow our assistance of market move out until it was safe for golf carts to be used in the market place and get the all call to move ahead from the Atlanta Police Department for safety reasons,” Freedman said.

The parade was also the largest ever with some 200 entries and lasted nearly three hours from beginning at the MARTA Civic Station to the end at the Charles Allen entrance of Piedmont Park. 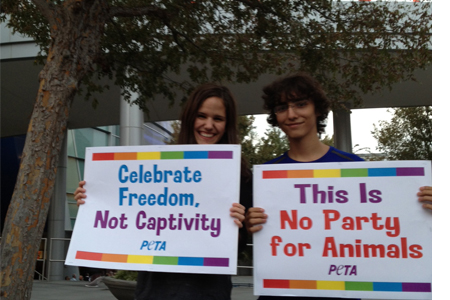 Freedman, who has been a Atlanta Pride Committee board member for many years, said he was especially pleased with this year’s VIP party and the general party at the Georgia Aquarium. The party sold out with some 4,000 people in attendance.

PETA threatened a protest of the aquarium party, saying the loud music from the DJs hurt the animals inside the facility. The national animal-rights organization even got lesbian actress Jane Lynch to write a letter to Atlanta Pride organizers asking them to move the party because of the alleged harm to the mammals. Also, PETA said an LGBT celebration of freedom should not be held in a place that holds animals as captives.

But only a handful of protesters were seen — eight — in front of the aquarium facing the road and not interfering with people entering the venue. Freedman said PETA did have a booth in the Pride marketplace as well as a float in the parade that focused on banning bull hooks used on elephants.

“PETA did have a market booth and was in the parade and we welcomed them to participate this year. We have no new developments and consider the issue closed for 2012. If their leadership would like to speak with our board they may contact us early in 2013,” Freedman said.

Planning underway for next year

“I would like our community to know that it takes 11 months to plan the Pride festival, parade and official events and we owe a large thank you to our APC staff, festival committee members, Pride leads and volunteers. We could not produce the largest LGBT free outdoor festival in the Southeast and the largest outdoor free festival in Atlanta without this dedicated group of staff and volunteers,” he said. 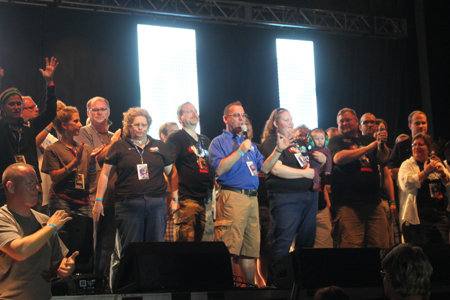 Buck Cooke held down the reigns this year as interim managing director and plans are to hire a full-time executive director by the end of the year, Freedman added.

“The APC Board of Directors is meeting next week to approve the candidate process to hire a full-time executive director which will be released by the end of this month. Our long term plans continue to be that we will hire an executive director before years-end,” he said.

Editor’s note: GA Voice was taking photos all weekend of all kinds of events — from the parade to the entertainment to the parties. Check out our new offer this year to buy high-res photos and place them on various merchandise at our Shutterfly account by clicking here. http://bit.ly/Qxg1WT