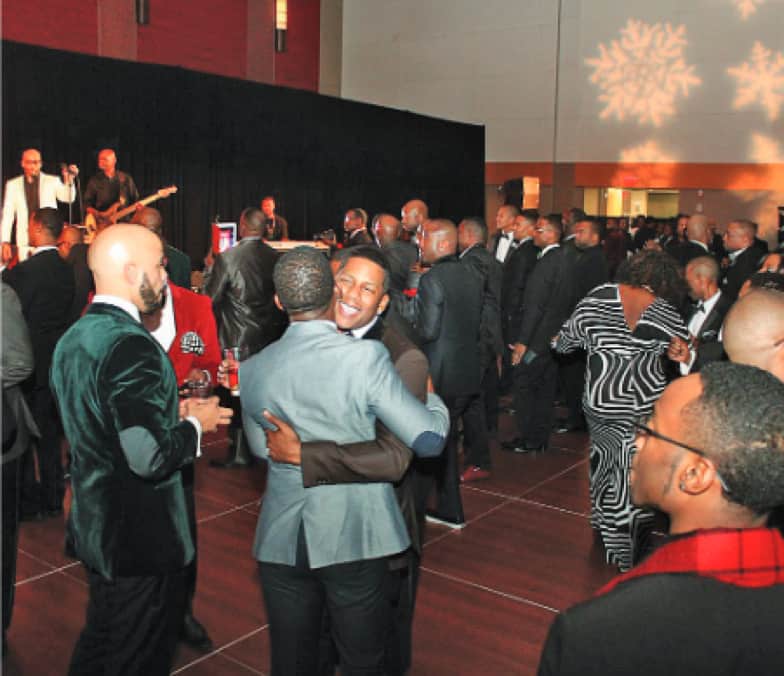 Halloween has just gotten sexier. The fourth annual Gentlemen’s Ball will take over Atlanta’s Marriott Marquis on Oct. 31 for a lavish black-tie gala. It has quickly become one of the hottest events of the year for black gay Atlanta.

The Gentlemen’s Ball is the creation of event planners and husbands Juan and Gee Session-Smalls. It is the signature event for their Gentlemen’s Foundation, a nonprofit organization dedicated to the healthy development of gay and bisexual men of color through support, empowerment and mentoring.

Gee Session-Smalls tells Georgia Voice that the ball has completely evolved away from the couple’s initial concept.

“The original idea was to have a second-chance prom for the LGBT community,” he says. “However, after we came up with its name it quickly evolved into an event that celebrated the true gentleman, which we believe is a man that is confident in himself, generous in his giving and proud to stand tall in his truth.”

This year’s ball, appropriately themed, “Beyond the Masks,” will be co-hosted by Cynthia Bailey of The Real Housewives of Atlanta and by television host Karamo Brown. Audiences may remember Brown as the first openly gay black man on MTV’s The Real World. He returns for a second year as co-host.

A single father, model, and pop culture expert, Brown tells Georgia Voice that he agreed to participate this year after witnessing firsthand the work of The Gentlemen’s Foundation.

“I saw the impact the first year had on individuals’ lives,” says Brown. “And when you see that type of impact, you want to be a part of that again because you see that you’re effectively creating change and moving the conversation around what it means to be black, gay, bisexual, or same gender loving.”

Guests attending this year’s ball will be treated to a decadent three-course meal, complimentary cocktails, networking, and music provided by DJ Richie Skye. Atlanta native and R&B singer Algebra Blessett will also perform during the evening. But Brown believes it’s the love that permeates the event that is its biggest draw.

“You’re going to feel immense amounts of love when you walk into the room. People are laughing, dancing, the music, the food, everything is jovial and it makes you feel good about being alive,” he says. “You’re going to walk away feeling better about who you are and about the strides you’ve made in your life.”

Party with a purpose

A key component of The Gentlemen’s Foundation and The Gentlemen’s Ball is mentoring gay and bisexual youth through their “mPact2” (Men Practicing, Affirming, and Celebrating Their Truth) mentoring program. The program focuses on promoting the spiritual and mental well-being of minority youth ages 18–25 through leadership and educational development.

“We want to help transform how society perceives gay men of color,” says Session-Smalls. “We want to help show our youth that you can be a proud gay man and there is nothing to be ashamed of.”

Session-Smalls is adamant about changing the experiences of young gay men of color who are at greater risk for depression and suicide.

“It’s so important for us to take what we’ve learned and share it with young men so that they don’t have to experience what we did,” he says. “When we were growing up we did not have anyone that we could look up to, seek guidance from or simply embrace us for who we were.”

“It’s great to get dressed up to get involved, but it’s about the work that you’re doing day in and day out,” says Brown. “That’s really where effective change happens. And The Gentlemen’s Foundation mentoring program is inspiring young men on an every day basis.”

The inspiration will continue at The Gentlemen’s Ball as LGBT leaders, straight allies and emerging voices in the black gay community are recognized with various awards throughout the evening.

“It’s extremely important to give our own the chance to showcase their art,” says Session-Smalls. We’ve also added the Gentleman of Artistry award in which the winner will be decided by the fans and will not only be awarded, but will have the opportunity to perform live at the ball.”

According to Session-Smalls, this year’s masquerade-themed ball is one not to be missed.

“We learn from our mistakes with each ball and that makes us better. We hope our guests will leave inspired, motivated and amazed, but most of all enriched.”