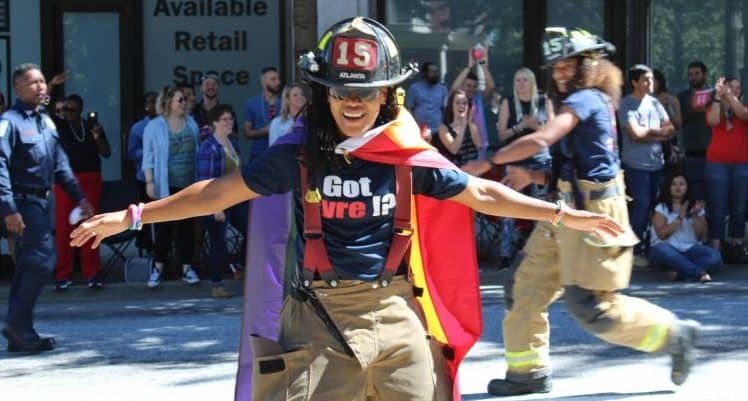 “No sexism, no racism, no nepotism, no cronyism,” he said. “What can I do to set that tone?”

The answer? Introduce diversity and inclusivity initiatives geared toward women, Hispanics and the LGBT community.

“I have not witnessed any discrimination against any member on this job, but still, as the fire chief, I have the responsibility to communicate to the members that I’m not going to tolerate any form of discrimination,” Baker said.

AFRD started making strides toward inclusivity months ago. The department attended a recruitment drive for the LGBT community, launched an advertising campaign showcasing its diversity, began reaching out to the Hispanic community and started a women’s leadership group. The need for various liaisons, including two for the LGBT community, developed organically from there, Baker said.

“I call it a departmental-wide, diversity inclusive program which includes the LGBT, Hispanic firefighters and women,” Baker said. “We didn’t do it to get recognized … We do it to make it happen.”

The roles of the liaisons include providing training across AFRD related to gender identity and expression, affirmation and support of LGBT employees and their families, community outreach and working with residents for emergency preparedness and crisis management.

“The liaisons are responsible for bridging the gap between AFRD and the LGBTQ community through community outreach and resource development,” said Lt. Latia Posey, who took on the role in January 2016.

Both Posey and fellow LGBT liaison firefighter Anaré Holmes started their roles in the last year, but the program will officially kick off Feb. 15 with a public event at the Center for Civil and Human Rights, featuring a film about an openly gay Medal of Honor recipient and a panel discussion with local LGBT public safety representatives.

“Even if you identify as being straight, but you’re an ally of the gay and lesbian community, come out and support,” Baker said. “This initiative is big for us. This is our first huge, open forum where we get to interact with the community.”

“’Narratives in Courage’ expands the image of what an American hero looks like,” he said. “This project defies stereotypes and presents another example of what it means to be a LGBT man or woman. It shines a light on the role we play in improving the quality of life for all people.”

Atlanta received the highest rating from the Human Rights Campaign for four years, and Baker sees it part of his duty to make sure that legacy continues, and ensure that anyone who wants to be part of a fire rescue team knows there’s a spot for them in the department.

He also wants to ensure AFRD continues its annual walk in the Pride parade.

“Think about it. You got a six-foot-six tall rascal in a fire chief’s uniform walking that parade, shaking hands, catching beads, throwing out beads, catching candy, throwing out candy, talking to everybody,” he said. “I think that’s a good sign for the community, to know that the fire chief is here to protect and serve everyone regardless of what type of identification you may or may not have.”

Baker said the LGBT inclusive initiatives were not reactions to former fire chief Kelvin Cochran, who was fired in 2015 because of discriminatory passages written in a book he wrote for a men’s Bible study group at his church. In the book, Cochran identified himself as the fire chief for Atlanta, which some said gave the impression these views were representative of the department and made LGBT public safety employees feel uncomfortable.

“Absolutely nothing, none of it had anything to do with Kelvin Cochran,” Baker said. “If you’ve ever been in a house fire or you ever had a cardiac arrest and you need someone to do CPR, you don’t care if that person’s uniform is black, white, gay or straight, pink or purple. You just want that person to save your life. I want to demonstrate that.”