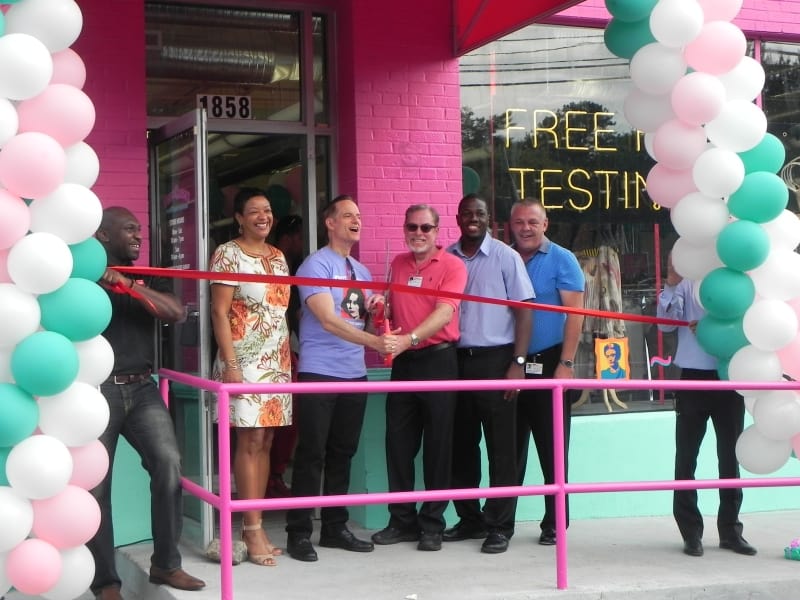 Out of the Closet, the AIDS Healthcare Foundation’s (AHF) chain of thrift shops that also serve as HIV testing centers and pharmacies, officially opened their Atlanta store on Cheshire Bridge Road on Saturday. This is the 20th Out of the Closet location nationwide.

The opening was marked by a ribbon-cutting ceremony that included high-profile members of AHF, including AHF President Michael Weinstein, as approximately 50 people waited for the store to officially open its doors. Among those present were members of the organization Thrifting Atlanta, which travels between various resale shops around Atlanta once a month.

Also present for the store’s opening day were a food truck with treats for guests and a DJ playing a mix of music.

Before the red ribbon cutting, different members of the store’s team and AHF spoke briefly to the crowd. Among them was Associate Director of Testing Gregory Jacques, who talked about the importance of HIV testing at the store. Jacques noted that testing will be available with no appointments necessary Tuesday through Saturday during store hours.

Out of the Closet’s Atlanta store joins a network that also includes locations across the country, from Seattle and San Francisco to Brooklyn and Dallas. The stores rely on donations from the public to supply each location; the Atlanta location accepts donations at the back of the store. The store also accepts larger donations and will arrange pickups for certain large donations online.

According to AHF, 96 cents of every dollar the organization earns through outlets like Out of the Closet and the AHF Pharmacy go directly toward patient care. Out of the Closet’s pharmacy is part of the broader AHF Pharmacy network, which has a separate metro Atlanta location in Lithonia.

Last year’s announcement about the opening of the thrift store was met with criticism by some in Atlanta’s LGBT community, who disagree with AHF’s stance on PrEP. AID Atlanta became an affiliate of AHF last June, citing “significant debt” as the reason. An end-of-year auditor’s report from 2014 shows the agency nearly $1 million in debt.