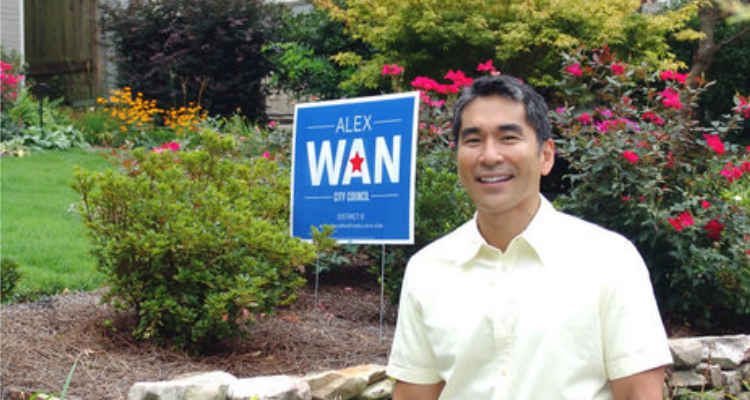 But this year, the longtime district six Atlanta City Council representative kicked off a campaign for Council president, and a fellow gay Atlantan followed suit to fill his vacated seat.

“The majority of City Council is going to roll off because they’re seeking higher office, or natural attrition,” said Kirk Rich, owner of Rich Real Estate Services, Inc. in Duluth, Georgia. “I don’t have kids, I’m 54 years old and I feel like the next part of my life I want to be more service-oriented to leave a legacy.”

Rich announced his candidacy for district six councilman — which represents neighborhoods in the Virginia Highlands, Ansley and Morningside areas — earlier this week. He spent the majority of his life as a commercial real estate broker, volunteering his free time with a number of nonprofit organizations. He was involved in some high-level policy issues as a broker, which whet his appetite to pursue public office.

“I’m a native Atlantan. I want to see us do incredibly well. Right now, the city’s in an insanely good spot. The current mayor has done a great job getting the city fiscally responsible,” Rich said. “I saw a real need for a real estate-centric skill set to be more involved in the council side.”

He said with all the development going on, there’s an opportunity to bring developers and city officials together at the table to discuss all aspects of a new project: not just the building itself, but the traffic and other infrastructure associated with it.

Some of the specific topics Rich hopes to include in such discussions are how to incorporate affordable housing in Atlanta and ways to solve transportation issues. He also wants to give as much voice to the citizenry as the developer gets.

“A lot of times the developer, for good reason, gets a good deal more of the ear of the city because they’re creating a tax base and they’re creating an employment base,” Rich said. “But now that we’re this incredible success story, we have these growing pains.”

This approach echoes that of Wan, who Rich praised for his “ability to get different groups of people together” to compromise.

“The president has the best vantage point to say, ‘Hey, we have a group of people from different stakeholder groups. Why don’t we pull them together, pull them around a table and get the best minds thinking about it?’” Wan said, citing the occasion in which Cathy Woolard, a former Council president now running for mayor, helped kickstart the formation of the Beltline. “That’s how I envision the Council president role to be and how I’d like to utilize the office.”

Being a Council member gave Wan a chance to see firsthand how the city runs.

“I feel like I made progress in the Council seat and if I really meant it and believe it, the next way to do it is to get to another place where I can effect change a little easier and a little more efficiently,” he said.

Being Council president is quite different from being a member.

“The most striked difference is you no longer vote, and only vote in the instance of a tie,” Wan said. “The second is the Council president makes committee assignments and committee chair assignments. I think folks will say that’s one of the best ways to influence policy.”

The Council president also serves as a sort of vice-mayor, and has the ability to bring people together in a way council members may not. Wan already has ideas about what he’d like to see the Council achieve, but said he plans to spend the next 11 months — the election will be this November — “going to all four corners of the city talking to folks” to hear their priorities. His campaign goals focus on three tenets: community development, business development and fiscal responsibility.

“In order for communities to be strong, they also have to thrive economically,” Wan said. “We need to focus on the local, smaller mom-and-pop businesses because those are the ones that, quite frankly, I think, stabilize a neighborhood.”

The official campaigns for both Wan and Rich will kick off in the coming weeks, exciting news for the city’s LGBT community, especially.

“Atlanta is a very gay-friendly, gay-supportive city, especially when you look at the South that we’re in the middle of,” he said. “If we get [myself and Alex], and three if Cathy Woolard is the mayor, I think the thing it does is it tells other LGBTQ folks that, hey, there’s no limitations with that issue for you to serve.”

Wan encouraged Atlantans to run for any public office if they feel they have something to contribute to the conversation or the political process.

“Being a candidate sparks dialogue about the issues that person cares about,” Wan said. “It just takes that interest and that commitment to just step out and do it.”

He said 2018 will bring about a number of changes to City Council, and is excited for the opportunities. With it being so early in the year, Wan said he had no doubts other candidates will announce intentions to run for his vacated seat. That being said, he did agree that, if elected, “Kirk will do a fantastic job.”