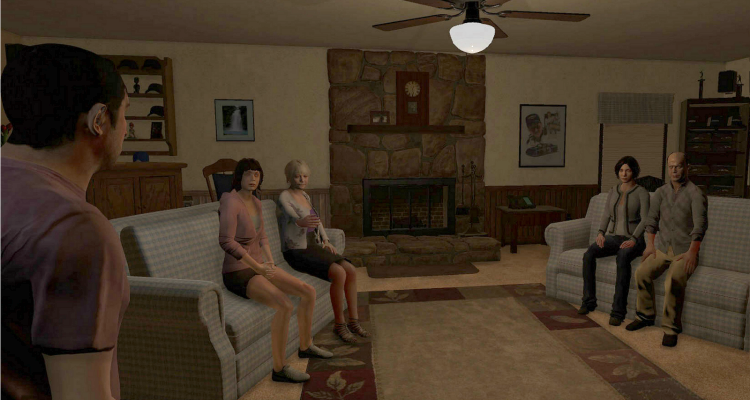 In 2014, gay Georgia resident Daniel Ashley Pierce recorded audio of his family’s so-called intervention, which turned into a physical altercation, based on his sexuality.

Next week, his story will be seen by thousands at Sundance Film Festival.

“It’s a once-in-a-lifetime opportunity. How many people get to say they acted in a project, produced a project, the project is about them and it got into Sundance? I’m like, oh my God, this is crazy,” Pierce, now a paralegal, said. “The purpose of it is to show people and put people through that, so they can understand what it’s like to witness that in person, for someone to be attacked because of their sexuality.”

The project is “Out of Exile: Daniel’s Story,” a virtual reality, or VR, experience that puts viewers in the room as observers of Pierce’s confrontation with his family. Following the animated audio experience, viewers will then “all of a sudden be right next to [Daniel],” said Shari Frilot, director and curator of New Frontier at Sundance.

“It’s a photographic capture of him,” she said. “It’s not an animated version of this kid. It really feels like flesh and blood inside the Vive. He’s talking to you about what his life is like after that event.”

The piece was developed by VR pioneer Nonny de la Peña, journalist and founder of California-based Emblematic Group. She and Sara Ramirez — the actress known for her role as Dr. Callie Torres in “Grey’s Anatomy” — approached Pierce about turning his experience into a VR piece.

“[Ramirez] played it for me and I couldn’t believe the audio,” de la Peña said. “With really powerful audio, you can recreate the story with witness information. … I immediately began to consider how to make that piece VR supportive.”

With “Out of Exile,” de la Peña essentially animated the live recording Daniel had of his attack.

“The idea is really about having you witness firsthand,” she said. “I want to turn the audience into a reporter.”

Certain aspects of the scene, which include Pierce having to pull his stepmother’s hair to get her off of him, and his father’s vitriol, are “terrifying,” de la Peña said.

Pierce has yet to see the finished piece, but he did put on the headset and walk around the “set,” the living room he thought he’d never see again, before the animated family members were added in. Prior to “Out of Exile,” he worked extensively with counselors and was able to approach it from a third-person perspective as much as possible.

“To be in the room, right next to Daniel, this poor kid who is in a fight with four family members about his sexuality, and watch his home and life disappear right before our eyes, and then see him attacked … it’s really jarring. It’s really emotional. You fear for his life. You fear for your life. You want to jump in and help him,” Frilot said. “It really communicates what these kids go through when something like that happens.”

Pierce grew up in what he describes in an abusive, neglectful environment that to outsiders, appeared like a perfect suburban family. When he came out, his stepmother initially appeared to be supportive, but the audio of his attack demonstrates that may have been lipservice. The rest of his family did not approve of his sexuality, or the fact that his boyfriend was Hispanic.

The day of the incident, Pierce’s grandmother called him and said she was coming over.

“My mind started rolling and I saw the whole thing before it happened. … I put my car in the front yard and got myself prepared, like I might need to escape or run,” Pierce said. “For a child to have that initiative, and say something is about to go down, is quite frightening, and sad that would be your instinct when a family member comes over.”

He realized his instincts were right when the adults in his family pull up together to confront him.

“I turned on my camera on my phone. I don’t even remember doing it,” Pierce said. “They need to have evidence of the attack.”

Pierce said one of the hardest things about the attack was his grandmother telling him she’d known he was gay since he was a toddler, but she believed he made a choice to be gay.

“They think a toddler made the decision to be homosexual. Toddlers have no clue what it means to be gay,” Pierce said. “What they mean by ‘you made a choice’ is, ‘you’re acting on your feelings and you’re dating somebody.’ If I had remained celibate my entire life they would’ve had no issue.”

He believes that another reason his family confronted him as they did was a loss of control; that he realized there was more out in the world.

“Someone attacked me and disowned me for being gay, and they pretty much put me in middle of the gay rights movement in Atlanta,” he said.

Though the confront and attack were shocking and raw, Pierce said he realized later it was his way out of the environment he grew up in. He hopes that by putting his story out there, he will ignite compassion in the hearts of fellow people.

“Daniel is an amazing, brave guy,” de la Peña said. “It’s just an incredible honor to me, the fact that Daniel was brave enough to let us make this piece.”

“Out of Exile” will be available for VR headsets following its release at Sundance.