“They [in Uganda] are trying to enact legislation that is going to pass according to their House Speaker in Uganda that would a make their already illegal homosexuality law punishable by much tougher standards including the death penalty,” Rich said. 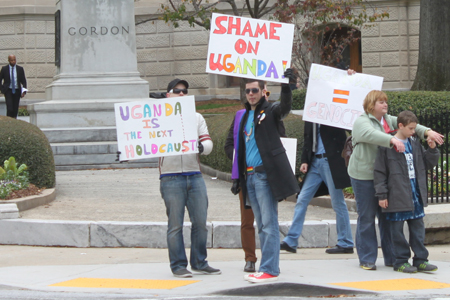 “That is wrong. It’s genocide for anybody they kill and it’s an extreme infraction of civil rights and human rights. We feel the UN should be involved and we want Congress and president to come publicly against it,” Rich added.

Uganda may be a world away from the steps of the Gold Dome, but Rich believes everyone should be aware and interested in stopping the anti-gay legislation expected to pass next month. 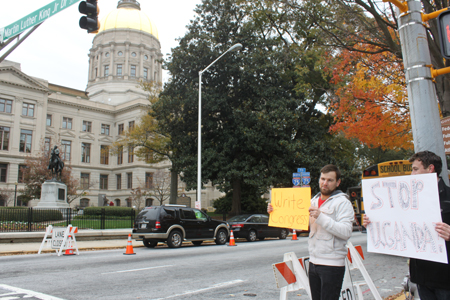 Leaders in Uganda are pushing the bill to be passed soon as a “Christmas gift to the people of Uganda” as stated in the video embedded below that was posted to YouTube on Nov. 12.

The bill has been discussed in Uganda’s Parliament since 2009. Passage was promised by Speaker of Parliament Rebecca Kadaga in recent weeks after an Inter-Parliamentary Union meeting in Canada. At one time, the death penalty was removed from the legislation but has been reinstated in the bill.

At the meeting, Canada’s Foreign Affairs Minister John Baird told Kadaga that Uganda was “trampling on human rights,” according to a story in the Daily Monitor.

“I will not accept to be intimidated or directed by any government in the world on matters of homosexuality,” Kadaga answered. After her comments, she said she was thanked by many people at the conference.

“I was surprised when colleagues came and thanked me saying that’s what they have always wanted to say but they had never gotten the courage to. That when it came to me that I had spoken for the whole of Africa, for the Arab world and Asians,” she told the Daily Monitor.

The Uganda bill is divided into two categories: “aggravated homosexuality” or the “offense of homosexuality.”

“Aggravated homosexuality” is punishable by death and includes a parent or authority figure who has same-sex relations, someone who is HIV-positive, or those who commit homosexual acts with minors.

The “offense of homosexuality” is punishable with a life sentence and includes those in a same-sex marriage and Ugandans who have same-sex relationships outside Uganda.

Homosexual relationships are currently illegal in Uganda and much of Africa and those caught can now be imprisoned for 14 years.

Uganda Parliament Member David Bahati introduced the private member’s bill on Oct. 14, 2009, after he met with American Christians including Scott Lively who said gay people are a direct threat to African families.

Bahati is a member of The Fellowship Foundation, better known as The Family, an international Christian organization based in the U.S. that organizes the annual National Prayer Breakfast. In 2010, President Barack Obama and Secretary of State Hillary Clinton spoke at the breakfast and against the proposed Ugandan bill.

The video of Uganda leaders cheering the promise of the passage of the “Kill the Gays Bill” this year as a “Christmas gift to the people of Uganda”:

Rachel Maddow of MSNBC has been tracking the Uganda bill and its deep American Christian connections including The Family, which organizes the National Prayer Breakfast in the U.S. and similar prayer breakfasts around the world.