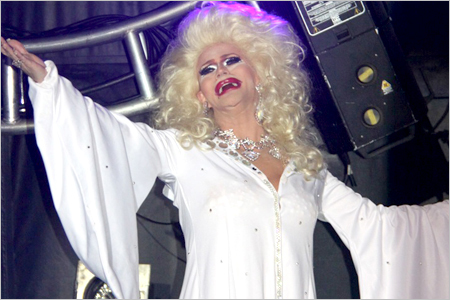 Kruiz was born Gary Dale Johnson on April 30, 1965, in Frankfort, Ky. His best friend and life partner was at his side at Grady Hospital when he died on Easter Sunday.

“I held his hand and told him to just let go, that it will be OK, and he took his last breath,” Kasey said in an interview. She asked her last name not be used.

Kasey and Kruiz lived together in a platonic relationship for some 25 years. Throughout the interview, Kasey used both male and female pronouns when referring to Kruiz.

“I just keep waiting for her to pop through the door, but she doesn’t pop,” Kasey said, her voice choking up. She praised Atlanta’s community for coming together on April 3 at Burkhart’s for a celebration of Kruiz’s life. View photos of the event at Project Q Atlanta.

“Our community came out and came out with a bang,” Kasey said. And roughly $3,000 was raised.

“It was phenomenal. Entertainers from all over the state came. It was a crowd like I’ve never seen. It showed me how much our community really cared and really cares. Atlanta came forward and I’m proud of them, every single person. It felt good and warm,” Kasey said.

Kasey met Gary Johnson when he was performing as Ashley Kruiz in the early 1980s in Kentucky.

“I had gone to a gathering in Lexington. People introduced us and we clicked immediately. Then in a non-bar setting I got to be friends with Gary,” Kasey said. “Gary is one of the kindest most caring people in the entire world. I say ‘is’ because he’s still with us. He’s still here. He’s looking down on us.”

In 1988, Johnson moved in with Kasey in Louisville. After about a year they moved to Atlanta.

“It was the best move for her career we could have done. She went up from there,” Kasey said.

Kruiz was entertainment director at Burkhart’s, according to her Facebook page that is now flooded with tributes. She was also Florida Regional Entertainer of the Year 2012, winning the title in July. She was also Miss Gay Cobb County 2012.

From the Burkhart’s website, a biography of Kruiz states Kruiz was created in 1984 under the tutelage of her drag mother, Chelsea Pearl. More from the bio:

In 1987 Ashley moved to Louisville, Kentucky, to attend Roy’s of Louisville Beauty Academy for cosmetology and was hired to perform at the “New Club Downtowner.” He began his full-time career as a female impersonator there in the cast of “La Boy La Femme.”

Ashley worked at he Discovery Nightclub and the Connection in Louisville and the Bar Complex and Great Moments in Lexington, Kentucky. In 1989, Ashley moved to Atlanta and was quickly hired onto the cast of Lipstix, where “Atlanta’s most beautiful women just happened to be men.” Ashley also worked in multiple Atlanta clubs, including LaVita’s, the Metro, the Gallus, Deana’s One More Time, and Crazy Ray’s. She was one of the original “Funky Diva’s” at the Armory. Ashley was also a famed performer at the internationally famous Charlie Brown’s Cabaret for several years. Ashley appeared at The new Metro, Blake’s on the Park, and WetBar. Most recently, Ashley was the Entertainment Director at Burkhart’s.

Known to many as the ultimate pageant queen, Ashley won numerous titles (too many to list or count). A few of his favorites included Miss Gay Georgia USofA, Miss Georgia Continental, Miss Renaissance, Miss Hotlanta International, and Miss Gay National.”

Ashley appeared on the national talk shows ”The Phil Donahue Show,” “Jenny Jones,” and “Maury.” Throughout his long career in female impersonation, Ashley was a gay activist and raised money for numerous charities and PWA funds.

Ashley was an entertainer’s entertainer. He was perfectionist in his craft, kind-hearted, and generous. He volunteered his time, talents, and tips to many charities and benefit shows for fellow female impersonators who were preparing for pageants or needing help with medical bills. Ashley Kruiz made friends wherever he went, and his successful female impersonation career allowed him to travel and make friends around the country. Known for her enjoyable personality, Ashley was affectionately known as the “Sweetheart of the South.”

“On stage, Ashley was the consummate performer, always evolving. She performed talent productions that brought the art form to higher levels,” he said.

“She was known nationwide for her beauty, style, and talent. Off stage, Gary was one of the most fun and kind-hearted people to be around. We all cherish every minute we spent with him,” he said.

Nicole Paige Brooks, who first met Kruiz in 2000 at Backstreet, also praised the turnout at Burkhart’s on Wednesday.

“She just never came out of character. She was the epitome of perfection. And she was just so nice,” Nicole Paige Brooks said tearfully.

“The last time we worked together at Burkhart’s I was telling her I was going shopping for a new wig, that I wanted to go blonde,” recalled Nicole Paige Brooks.

“She reached into her bag and pulled out blonde hair and told me, ‘You don’t need to buy blonde hair.’ That’s just how she was,” she said, adding, “I never got to return her hair.”

Shawnna Brooks, also an Atlanta drag legend, remembers meeting Kruiz in 1991 after she was hired to work at LaVita’s, adjoining Lipstix, on Cheshire Bridge Road.

“She was very professional. We hung out after shows. She was a down to earth person. She was real, there was no fakeness,” Shawnna Brooks said.

“If you really didn’t know her, she was very quiet. But she was funny in a crazy way. She was always asking me, ‘What you think about this?’ She was very excited about her career,” Shawnna Brooks said. “She didn’t just open up to anyone.”

And she was beautiful, Shawnna Brooks added.

“I miss her so much. She was one of the most beautiful boy-to-girl illusionists in the business. When he didn’t have make up on and was wearing those little glasses you didn’t know she was such a beauty. She was very striking,” she said.

The pain of losing her is still real, they all said.

Kasey said her best friend and roommate had been sick for some time.

“Gary had been really sick for six or seven months, then the beginning of February he developed pneumonia and went into the hospital and then was released.

“But he still had a bad cough. Three weeks ago today I convinced him go to the doctor. The doctor immediately called 911. He was in the Grady critical care unit for six hours before he was transferred to ICU. They intubated him immediately,” Kasey said.

Nicole Paige Brooks said Kruiz was a private person and didn’t want people to know she was sick. Atlanta drag queens have been raising money and continue to raise money to help cover medical and other costs. Two more Kruiz tributes are planned, one on April 10 at LeBuzz and then another at the Atlanta Eagle on April 19.

“She was a family member to us. We were a family. That’s what you do for family,” Nicole Paige Brooks said.

“We’re very different sort of people [in the drag world]. We all have respect for each other. This bond is something nobody else knows because they don’t do what we do,” she added.

“And she was so nice. That’s very rare in our world. Most of us, including myself, come across as bitches. But she never did.”

Kasey said a celebration of Kruiz’s life is tentatively planned for Sunday, May 12. And it will be a celebration, she said.

“She wouldn’t want us crying. I want it to be an upbeat service,” said Kasey. “He’s going to be with us always. That’s what people have to know. He’s still with us. I believe that in my heart.”