“Can you also please remove the porn-style money shot from our door? I asked John to relocate his photo, but he refused, citing his contract with you – and I do not want to impede your business in any way. But I am responsible to provide a comfortable working environment for my employees, and it is uncool (and probably illegal) for me to ask them to walk past a big red mouthful of oozing sperm every day. Put it someplace else – I don’t care, But not on our doorway please.” 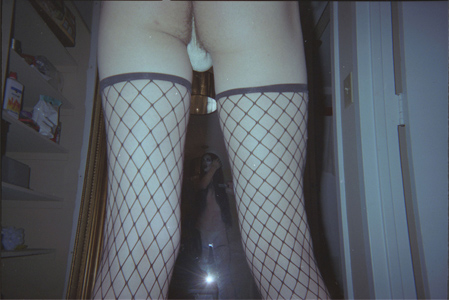 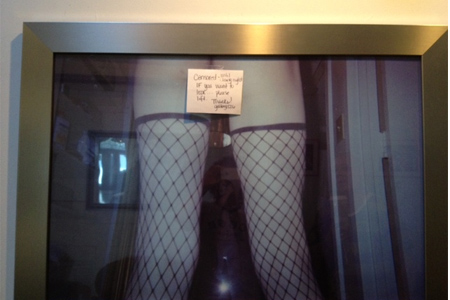 (Uncensored and censored photos of Violet Chachki by Blake England. The sticker states ‘Censored until closing night. If you want to look, please lift. Thanks. Gallery1526’)

The cover-up papers will be removed for the Sept. 28 reception and drag show as part of Atlanta Celebrates Photography. The show is also party sponsored by Atlanta Pride. Interestingly, Atlanta Pride is located in the Phillip Rush Center, the city’s LGBT community center, which is next door to the art gallery. Atlanta Pride is also a partial sponsor for the exhibit.

Bell, who is bisexual, a mom and is pregnant, responded to Jacobson’s email, also on Sept. 9, defending the exhibit and artists.

See the thing is: This show has gotten tons of press from all over the city- probably more than anything we have ever done. Almost every gay pride magazine is coming to review it- along with [Atlanta Celebrates Photography]. There are so many gay pride heads looking into our direction in such a great and wonderful light- that I do not want to risk any intolerance or bad press from taking things down. The show closes on September 28th- and at that point only corporate art will be on display- I am getting too big to do much with the gallery for a little while- so the edge will be at rest- 🙂 Thank you!

Jacobson was not impressed and responded on Sept. 10 with another email.

This email set Bell off who retorted with this:

So- I will switch the two amazing photographs- so that the image is not directly in front of your door…if that is what this is about- we should be done with this conversation. I will tell you…as a woman… your emails in regards to the images …to me…are far more filthy than the image itself could ever be- and I don’t care how much porn you watch..TMI.  You have used more vulgar terms than I have heard in quite sometime- when all you had to do was ask me to switch them out.  And I am offended. Do not send any more emails to me with this kind of language- EVER!
The irony is unreal here. Wow.

There is already a buzz that the show is getting flack from some people- I am sure Jon remembers who- and I can assure you that being intolerant of homosexuals and artistic expression is a not good for any business.  However- This has created even more interest in the event and more and more people are defending it-
WHY? ……because drag is the most in your face freedom of gay men….and this is a celebration of their rights and I stand behind them. 100%.

The photographers are also deeply disturbed by the recent turn of events. Jon Dean, who took the photo of Violet Chachki in front of the “big red mouth full of oozing sperm” said the gallery has exhibited plenty of photos and paintings of nude women before with no complaints. 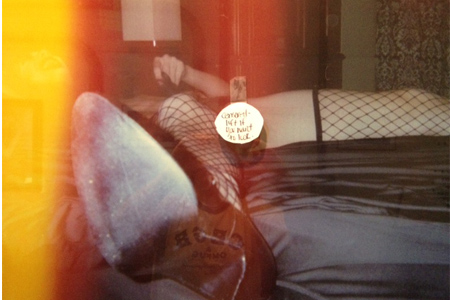 (Photo of Violet Chachki by Blake England. Writen on the yellow sticker is ‘Censored. Lift if you want to look’)

“What year is this? In Atlanta we sometimes fool ourselves into thinking that we are immune to these kind of backward thinking idiots. To be honest, I have gotten so immersed into this subculture that this is all coming as an unpleasant surprise,” Dean said Tuesday evening.

“It’s a sad reminder that we have a long way to go when it comes to acceptance in the south, particularly. Right now I’m feeling very protective over them [photographers and drag queens], as we’ve all become a dysfunctional type of family. We’ve all put our hearts into this work. People need to be made uncomfortable sometimes. What you say is indecent, I say is fabulous!” Dean added.

“I hope queers and drag queens make people feel uncomfortable. I pray people find all this morbidly fascinating if not beautiful or sexy. I think that taking people out of their comfort zones and getting them to care about something, whether it be love or hate, is exactly what we’re trying to do as photographers and performers,” he said.

“Censoring us is not going to work, we can keep giving you plenty of material to cover up. We want the creeps and bigots to hate us, how else would we know we’re doing something right?” England said.

“Legendary Children” has received much national press, including in the Huffington Post and Vice. Read more about the exhibit in the GA Voice print edition coming out Sept. 13.