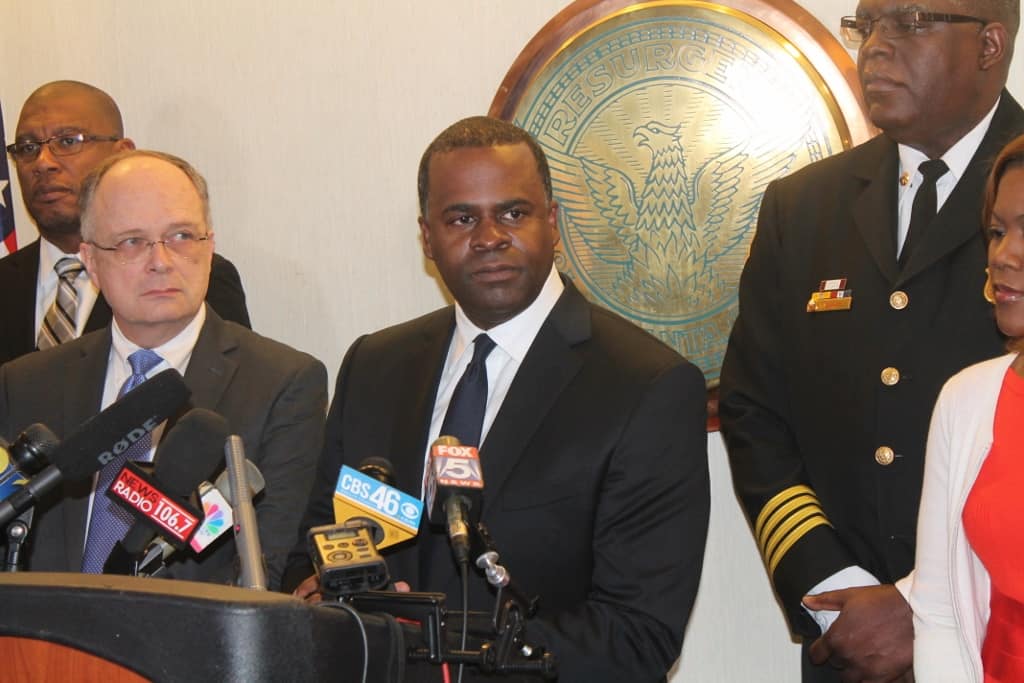 Dyana Bagby
AtlantaNewsPolitics
January 13, 2015
Atlanta Mayor Kasim Reed posted to his Facebook page a statement to his detractors over the firing of Kelvin Cochrane as fire chief to stress the firing was not over Cochran’s religious beliefs but rather because Cochran violated city policy.
His message was posted on the day the same day religious leaders denounced “religious freedom” bills to be debated in the Georgia legislature and a large rally is now being held at the Capitol to support Cochran and speak out against Reed’s decision to fire Cochran.

Last week, I made the decision to terminate our Fire Chief, Kelvin Cochran. It was a decision that was not made lightly because I appreciated Chief Cochran’s service to the City of Atlanta.

While you may have read articles that asserted the issue at hand was Chief Cochran’s religious beliefs, I can assure you that those comments could not be further from the truth.The truth is that I am a man of deep faith myself, and we are a city of laws. Chief Cochran’s book, “Who Told You You Were Naked,” was published in violation of the city’s Standards of Conduct, which required prior approval from the Board of Ethics.

I believe his actions, decisions, and lack of judgment undermined his ability to effectively manage a large, diverse workforce.  Every single City of Atlanta employee deserves the certainty that he or she is a valued member of the team and that fairness and respect guide our employment decisions.

His actions and his statements during the investigation and his suspension eroded my confidence in his ability to serve as a member of my senior leadership team.Please take a moment to read this editorial that was published in today’s New York Times.Thank you for all of your kind offers of support.  Please take a moment to remind everyone you know that the City of Atlanta is a city too busy to hate.

The city has also released the full investigation into Cochran that led to him being fired. The document notes that because Cochran distributed copies of his book to colleagues at the fire department, he violated city policy which led to his termination. Cochran acknowledged in an interview with GA Voice he did give copies of his book to colleagues, but said he knew them in “in personal relationships as Christians.” However, three of the at least nine people those who received copies said they did not ask for it.

Another reason for his firing, the investigation revealed, is because Cochran did not seek permission to write the book in the first place as required by city policy. Cochran states he did receive permission from the city’s Ethics Department; the investigation finds he did not receive permission. Reed also said he was never told of the book and he should have been told about the book especially since it contained inflammatory language.

The investigation also found no instances of discrimination by Cochran. In fact, Cochran suspended several firefighters for 30 days after they publicly showed their support for Chick-fil-A by posting a photo of themselves in uniform at one of the restaurants. The photo on Facebook came in the midst of controversy surrounding Chick-fil-A CEO Dan Cathy speaking out against same-sex marriage.

Firefighters under Cochran said they were not confident in Cochran’s ability to lead due to what is expressed in his book.

“There was a consistent sentiment among the witnesses that firefighters throughout the organization are appalled by the sentiments expressed in the book. There is also general agreement that contents of the book have eroded trust and have compromised the ability of the chief to provide leadership in the future,” the report states.