At his first hearing before a magistrate judge after he was arrested, O’Donovan was denied bond.

O’Donovan has not spoken to officers with the Atlanta Police Department about his case, Pines said.

“It is my understanding a separate detective has been assigned to investigate this case with Luke being the victim, which he was in this case,” Pines said. “He had at least five people attacking him.”

Officer Kim Jones, spokesperson for APD, confirmed today a detective is working on whether O’Donovan was a victim in the incident. Police also continue to investigate the case with O’Donovan as the defendant.

Pines said it is not useful for O’Donovan to speak to an officer through a pane of glass at the jail and that if O’Donovan is released on bail Wednesday he will cooperate with police in their investigations.

On Sunday, Jan. 13, a group of some 50 people met at the Little Five Points Community Center in a town hall setting to discuss how to support O’Donovan. 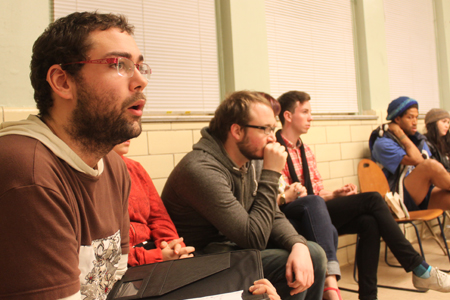 His friends and supporters, who have named themselves the Support Luke Defense Committee and started a website letlukego.com, have called the incident a “queerbashing.” They have also set up an account seeking donations to help pay for O’Donovan’s legal fund. As of today, the group has raised $3,688.

They maintain that O’Donovan was defending himself from a group of homophobic men who were angered by him dancing with and kissing men at the New Year’s party held at 239 Gibson St. in Reynoldstown.

In a statement read at the start of the town hall by Aroara Thunder, a drag personality who organized the meeting and is a friend of O’Donovan, said O’Donovan was defending himself.

“Our understanding of the events of Jan. 1 is that Luke was seen kissing men during a party, was called homophobic slurs by multiple people who are known to have a history of homophobic behavior, and was attacked later that night during the party by these same individuals. He sustained injuries from being kicked, punched and stabbed in the upper back at least once. Any injuries that the attackers may have received were due to Luke defending himself,” the statement reads.

The press release issued also states, “Luke is queer, which means he refuses a stable sexual identity.” However, O’Donovan does have a girlfriend.

“We have used the word ‘queerbashing’ to describe this incident because our understanding is that Luke was attacked because he was seen kissing other men. We believe that attacking anyone because of their sexual expression is unacceptable,” the statement reads.

An Atlanta Police report released Jan. 3 states that witnesses told officers a fight broke out among five or six men on Jan. 1 “over a discussion regarding sexuality.”

“All witnesses stated they observed a group of five to six males fighting in the back yard of 239 Gibson St. SE over a discussion regarding sexuality. The fight quickly escalated when the suspect, Mr. Luke O’Donovan pulled out a knife. Witnesses said that the victims were attempting to stop Mr. O’Donovan when they were stabbed,” the APD report states. The department’s two LGBT liaisons are aware of the case.

The police report lists victims as Kevin Ralph, 25, who received a stab wound to the thigh; Brett Hammett, 22, with a “trunk internal” stab wound; and Blake Love, 21, with a stab wound to his wrist.

O’Donovan was described in the police report as having “multiple stab wounds to his upper back.”

Seated in a circle at the Little Five Points Community Center, the friends and supporters of O’Donovan tried to come up with strategies to put an end to homophobic attacks. A rally is set for Tuesday, Jan. 15, at 6 p.m. at the East Atlanta Farmer’s Market. 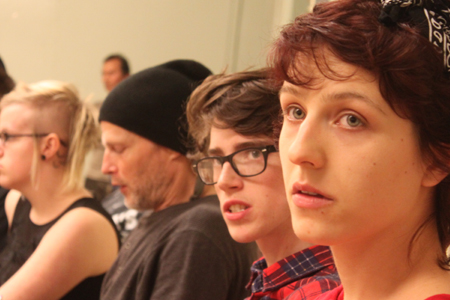 “This is really fucking scary, y’all,” said Aroara Thunder, who asked his drag name be used. “I was supposed to be at that party but my boyfriend wanted to do something else.

“When I found out that a lot of my friends were there, it became really real…and it’s really terrifying. I’m still processing what this means to be a queer in Atlanta and this can still happen,” he said.

Another person who said he was at the party said it was sad that O’Donovan was alone when the incident took place.

“It reminded me you can’t go places alone. I can’t help but feel that this happened when Luke was alone and not with any of his friends. I haven’t been able to go anywhere alone,” he said.

Marina Scholtz, 18, a friend of O’Donovan’s, said perhaps what happened to him could be a starting point to create a support system of traveling in groups.

“We are all saying we feel unsafe … Luke could be the starting point for us,” she said.

Other suggestions included posting signs and posters in places where people gather to let everyone know homophobia is not tolerated in these spaces.