Here’s what Baton Bob had to say in his original Facebook posting at about 2 p.m. Thursday, July 4:

After receiving several criticisms from fans to his post, Baton Bob retorted with:

And the backlash began. Friends and fans said they were upset with his language and his use of the slur “white lesbian bitch.” Some people are posting that they are deleting him as a friend.

One person noted, “Well, no worries today about the fireworks being rained out! Just head over to Baton Bob’s page and watch a career go up in flames. SMH.” Another person stated, “Baton Bob had done went all Amanda Bynes on our ass!!!!”

The angry posts came hours after Baton Bob posted thanks on the morning of July 4 before heading to the Peachtree Road Race: “Good Morning to the ATL!!!!!……Just wanted to wish EVERYONE a SAFE and Joyous ‘Fourth Of July Holiday’;…..despite the Rain!!!!!……This year is an interesting year because of the ARREST,…..I NOW; have to SECURE my LIBERTY to continue to do what I do WITHOUT any PROBLEMS from RENT-A-COPS and the ATLANTA POLICE DEPARTMENT!!!!!……This is a SERIOUS MATTER,…..and it will be handled in that FASHION!!!!!…..I want to personally ‘THANK’ the Legal Team that has surfaced, TO RIGHT THIS WRONG!!!!!!”

Known for his prancing in a tutu while tooting his whistle on Atlanta’s streets and bringing joy to many, Baton Bob ran into trouble with two female Colony Square security guards on June 26 while celebrating the Supreme Court’s rulings on the Defense of Marriage Act and Prop. 8. He allegedly called them “bitches” and told them “I will fuck you up!” after they apparently asked him to leave the area.

An Atlanta Police officer responded to the scene and an alleged altercation occurred between Baton Bob and the officer. Baton Bob was arrested and charged with two counts of simple assault and one count of obstruction of officers. He spent the night in jail before making $4,000 bail.

He disputed his arrest and states now he has lawyers willing to help him fight the charges. Also on Facebook, Baton Bob stated the APD officer showed him respect and the police report on the incident states Baton Bob showed remorse for what happened.

UPDATE Friday morning: Baton Bob posted to his Facebook page early Friday morning an explanation of his actions Thursday with this:

Yesterday morning when the rain subsided, I decide to go up to Pharr Road and Peachtree to watch the runners in my ‘Miss Liberty Costume’. There were lots of runners that saw me,…..and stopped for a photo opt;…..which I obliged.
Then, I made an impromptu decision to do the whole race route,…..all the way down to 10th street. During that process, there were lots of people that wanted me to stop for a photo opt; and I simply stuck my hand out like the Diana Ross,…..Stop In The Name Of Love and said, No Photos Please!!!!!…..The reasoning for that is, while I am on the street performing;…..to stop and pose for a photo opt breaks my rhythm. I realized that I had a long trek ahead of me, and the only way for me to make to 10th Street; I knew I had to keep moving!!!!!……There many other opportunities for you to have photo opts with me, other than during time that; I am on the street performing.
However, there was an incident where some runner wanting a photo opt;…..and I said NO and apparently, that was not what she wanted to hear and proceeded to call one of her girl friends and complain about. Later on, I ended up at Zocalos Mexican Restaurant and the young woman that this woman called was there. On her way out of the restaurant, she came over my table and blasted me about her disappointment o
f her friend not getting her photo opt??????
Nonetheless,…..I know I try to accommodate everyone; that request a photo opt; depending on the circumstances.

You can read more about Baton Bob’s Facebook meltdown in a story by Rich Eldredge at Atlanta Magazine by clicking here.

Baton Bob is also heading to Piedmont and Peachtree for his regular set, he states on Facebook.

What do you all think of Baton Bob’s recent actions? 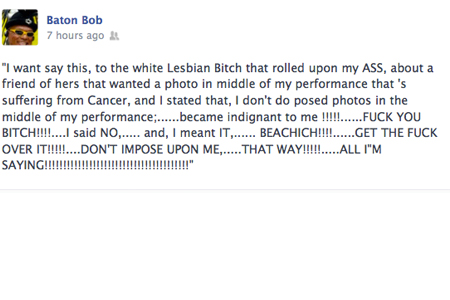