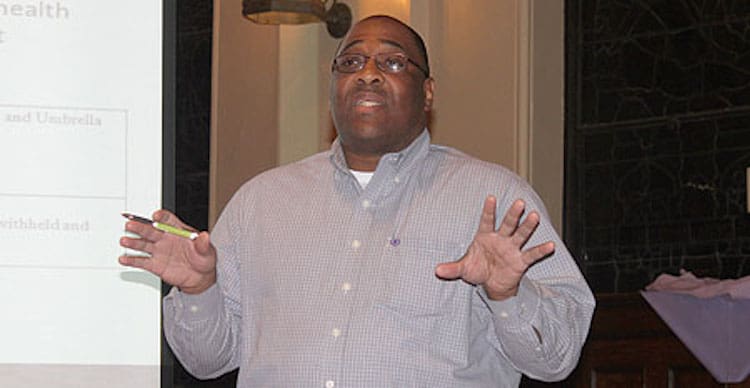 YouthPride, an organization that at one time served hundreds of LGBT youth in metro Atlanta but has been mired in controversy for the past several years, has had its IRS tax exempt status revoked.

A review of online IRS tax records shows IRS automatically revoked the organization’s tax exempt status on Feb. 15; the status was posted on the IRS website on May 11. 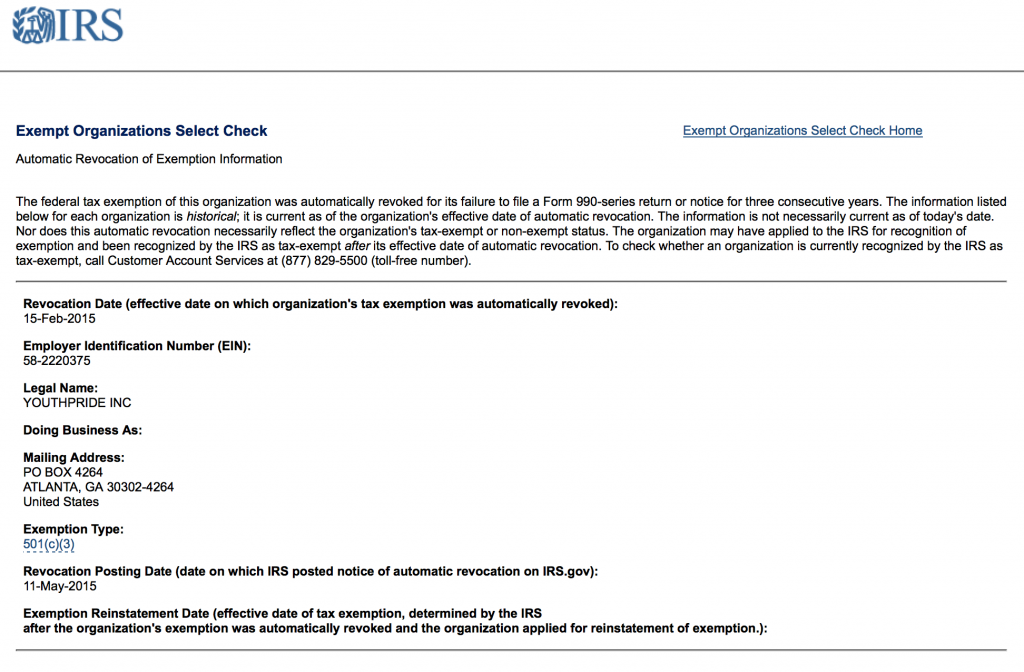 The IRS automatically revokes an organization’s tax exempt status for failure to file a Form 990 return or notice for three consecutive years. A nonprofit can reapply for tax exempt status.

According to GuideStar, a website that tracks nonprofit organization’s 990s, the last 990 form YouthPride filed was in 2011. GuideStar also notes that YouthPride has lost its tax exempt status:
“This organization’s exempt status was automatically revoked by the IRS for failure to file a Form 990, 990-EZ, 990-N, or 990-PF for 3 consecutive years. Further investigation and due diligence are warranted.”

However, on YouthPride’s website at www.youthpride.org, there are links to make donations and YouthPride is claiming the donations are all tax deductible.

The Georgia Secretary of State’s Office currently has YouthPride in good standing when it filed its official paperwork on March 2, 2015 as a nonprofit corporation and paid the $85 fee.

The official documents filed with the Secretary of State, however, list YouthPride’s official address as 72 Broad Street. YouthPride was evicted from that location May 22, 2014.

The documents filed on March 2, 2015, with the Georgia Secretary of State’s office, lists Terence McPhaul, the controversial executive director, as the person who filled out the forms: 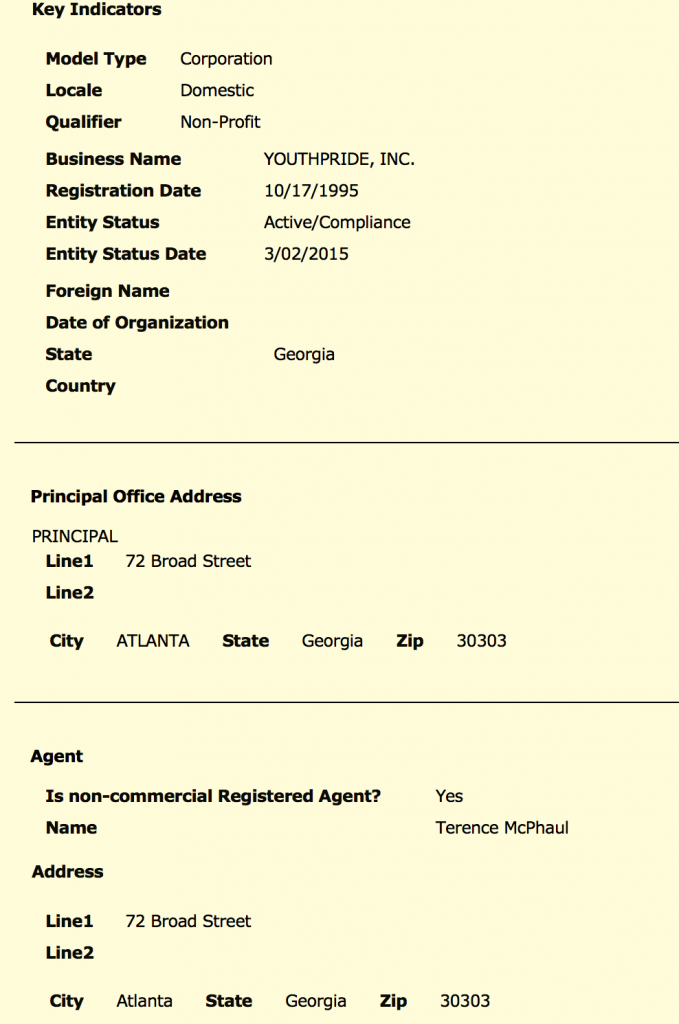 In 2013, McPhaul listed incorrect board members with the Secretary of State’s office.

According to Georgia law, it is a misdemeanor to intentionally lie on a form with the Secretary of State’s Office as stated in the fifth paragraph of the form below: 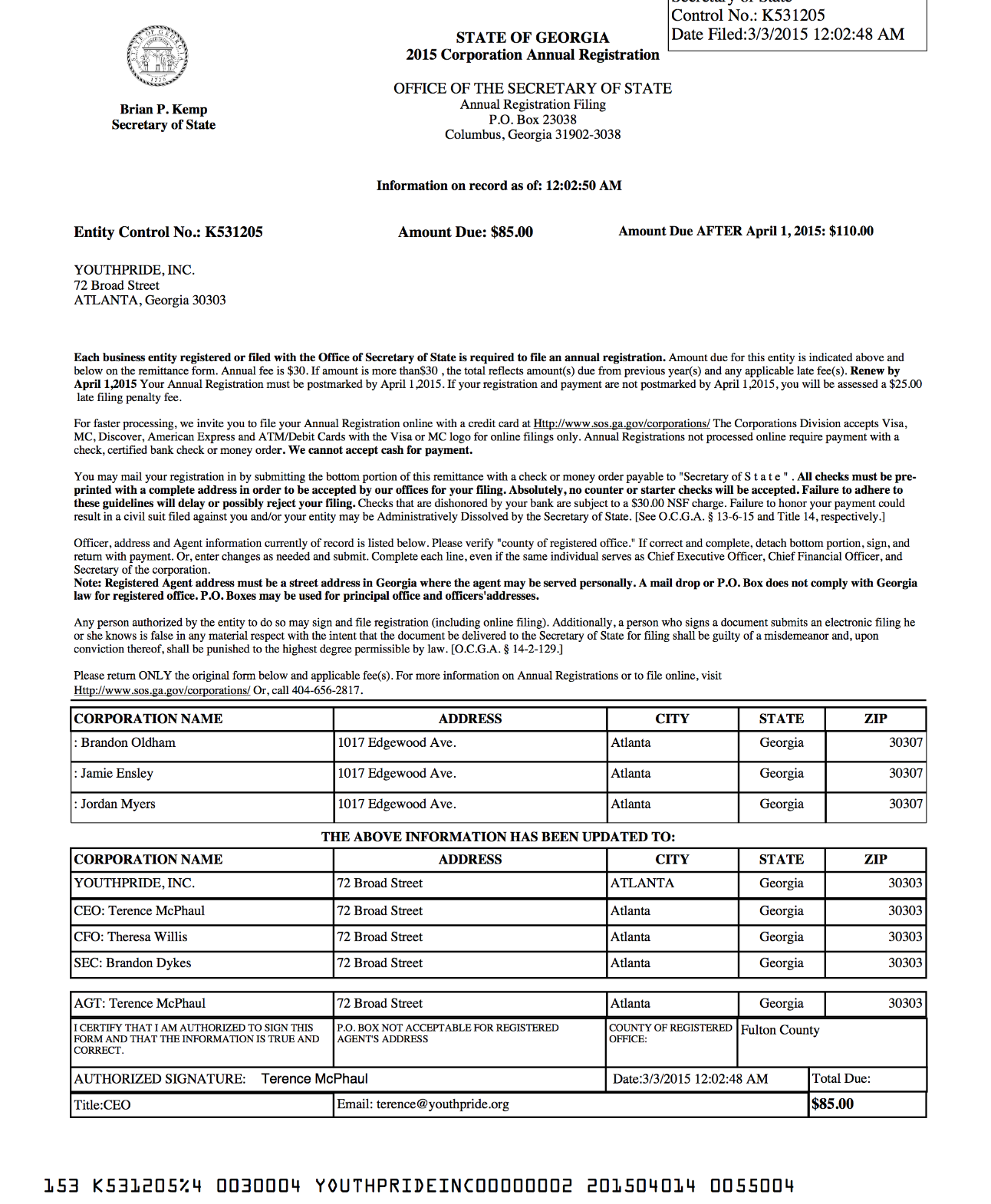 Calls to the Secretary of State’s office for comment have not yet been answered.

Listed as officers with the Secretary of State are McPhaul as CEO, Brandon Dykes as secretary, and Theresa Willis as CFO.

However, in August 2014,  Willis told the Georgia Voice she was no longer a board member of YouthPride. From that interview last year:

When reached by phone on Tuesday, Theresa Willis, who was the board president of YouthPride, said she could not comment on the status of the organization because she is no longer on the board.

“I haven’t been on it for quite a minute,” she said when asked when she left the board. She also could not say where McPhaul is.

“Like I said, I’m no longer on the board,” she said, adding that she could not handle stress because of heart problems.

A voicemail left with Willis this week seeking comment about YouthPride has not yet been returned.

A voicemail seeking comment was also left at YouthPride’s number as listed on its website that also not been returned. Emails to McPhaul and YouthPride have also not been answered.

Dykes, a young HIV activist who is apparently working in Nashville, was reached by phone Thursday and when asked what he could say about YouthPride he said,”Well, there’s not a whole lot I can tell you, so I’m not sure.” When asked where YouthPride was meeting, Dykes disconnected the call and then did not answer when called again. Dykes then issued an email statement:

“Hi Dyana, out of courtesy I’m responding. You have personality attacked the organization that has help me accomplish so much in life on numerous occasions. Despite anything you tell me or publish I will never stop fighting for YouthPride. As proud alumni of YouthPride I know its all about providing a safe space for youth just like me. I have no further statement to provide on any issues concerning with YouthPride.”

• YouthPride’s troubles began in December 2011 when the organization put out a public call via Facebook that it needed to raise $40,000 by the end of the year or its doors would close.

• Soon after news of YouthPride’s dire financial straits made headlines, it was also learned the organization, founded in 1995, had no viable board of directors.

• In June 2012, YouthPride was forced to move from its home at Inman Park United Methodist Church after the church sued the organization for more than $50,000 in back rent.

• In June 2013, YouthPride was officially evicted by Fulton County marshals from its location at 955 Washington Place SW in the Ashview Heights neighborhood after nonpayment of rent for one year.

• The leadership troubles also led Fulton County in August 2013 to take legal action to be repaid more than $18,000 of a $40,000 grant awarded to the organization for 2011-2012 for failing to provide mental health and counseling services as mandated by the grant.

• Later in August 2013, the federal AmeriCorps VISTA program pulled its funding and volunteers provided to YouthPride because, “YouthPride is still in the process of recruiting to fill all their agency board of directors.”

• In February 2014, criminal warrants are issued for the arrest of Terence McPhaul for writing bad checks in the name of YouthPride. To date, McPhaul has not been arrested.