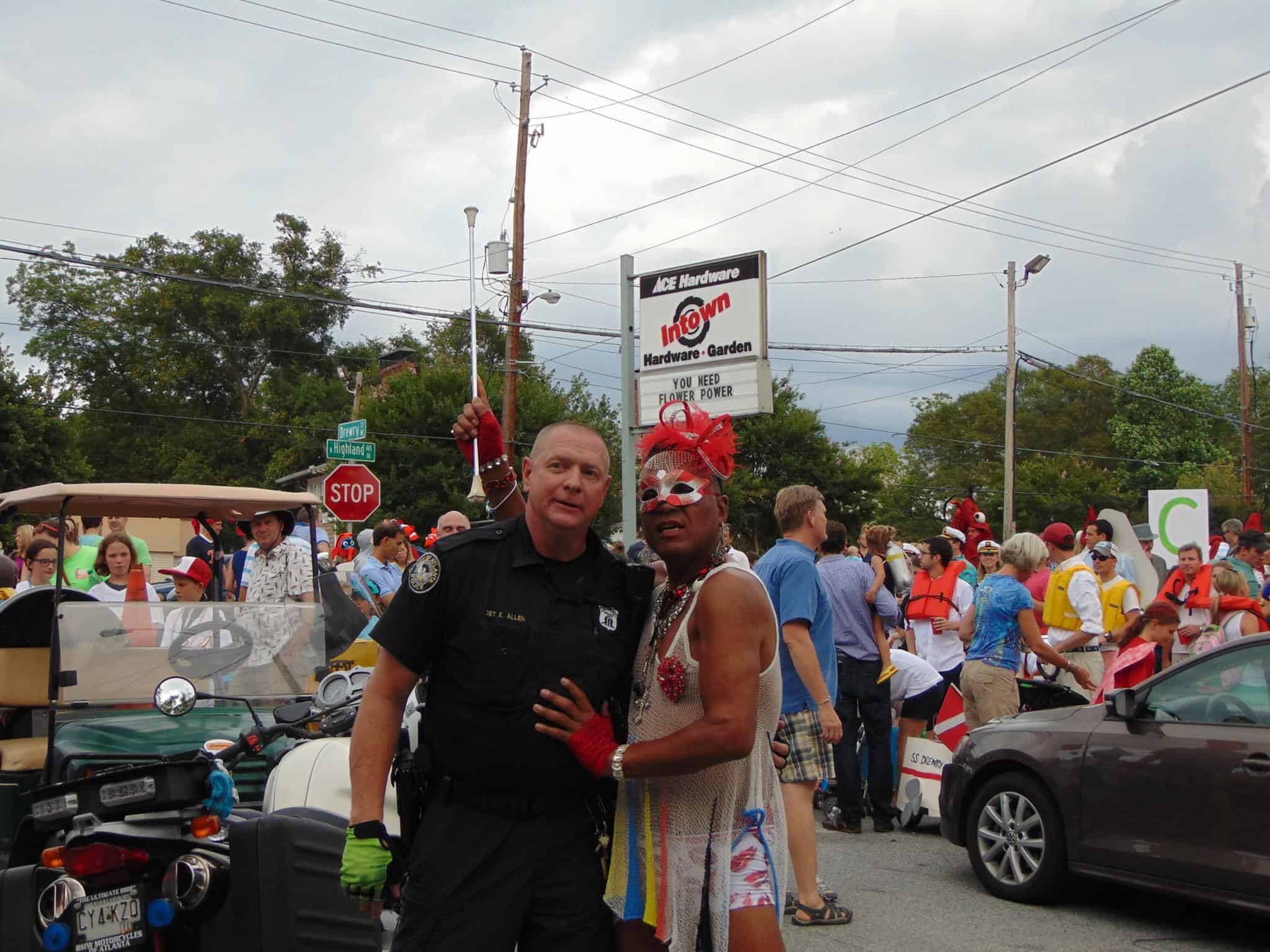 Atlanta gay street-performance character Baton Bob has filed a federal lawsuit against the Atlanta City Department, alleging his constitutional rights were violated when he was arrested one year ago, according to his attorney.

The lawsuit, filed June 26, includes the allegation that the APD coerced Baton Bob, whose legal name is Bob Jamerson, into making a Facebook post to his some 5,000 fans that the police treated him well after taking him into custody after he was arrested last June. The suit also alleges Jamerson’s Miranda rights were not read to him after he was arrested.

The city and APD are not commenting on pending litigation, according to city of Atlanta spokesperson Carlos Campos.

Jamerson, aka Baton Bob, was arrested on June 26, 2013, at Colony Square in Midtown, hours after the historic ruling by the U.S. Supreme Court striking down a major portion of the Defense of Marriage Act. He was charged with two counts of simple assault and one count of obstruction of a police officer.

After the arrest and while in custody, Baton Bob, was able to get on Facebook and send a message to his approximately 5,000 fans to say he was treated with respect by the APD. However, Baton Bob now says he was actually coerced by the APD to make the public statement.

Criminal defense attorney Joshua Brownlee, who is straight, took the case on pro bono after reading about it in the media.

“The police coerced him into making a Facebook statement while he was in custody. Nobody I know has ever seen anything like this before,” Brownlee told the GA Voice in November. He said Baton Bob’s case reminded him somewhat of what happened with the Atlanta Eagle raid in 2009 when officers busted into the gay bar and forced some 60 plaintiffs to the floor. The APD’s actions were found to be unconstitutional by a federal judge.

“I think they [the APD] still believe they think they can do a spit and polish to cover up a culture of corruption against the LGBT community,” Brownlee said.

The police report goes on to state Baton Bob was at the corner of Peachtree Street NE and 14th Street NE “dancing and gyrating in a sexual manner on the city sidewalk blocking pedestrian traffic.”

Then, when an Atlanta Police officer approached Baton Bob, the street character, well known for his salty language, said to him, “Fuck you, what’s this about,” states the report.

Baton Bob scuffled with the officer and then, according to the report, he kicked the officer’s leg and attempted to kick him in the groin. After Baton Bob was finally cuffed, the report states he told the female security guards, “fuck you, bitch” and also called the the police officer a “black bitch.”

The arresting officer, H.J. Davis, states in the report that Baton Bob soon had a complete change in demeanor and “continued to apologize and stated he was thankful for how respectful I was. When the suspect arrived at the precinct he was even more cooperative and continued to apologize.”

While in custody at the precinct, Baton Bob posted to his Facebook fans that he was treated with nothing but respect by the APD.

“First of all, the atl police officer that responded to the incident thru security has been very respectful and gracious to me even in handcuffs. So, the situation escalated from a complaint from a security officer in the area and for some reason she rolled up on me like she didn’t know who I was and like I had not been there before. For them to call police to come to intervene was not necessary. So, out of it, because of my fury, the Atlanta police officer did not understand the elements of the situation, so he was trying to do his job, respectfully and arrested my ass!!!!!!!!! I’ll be out tomorrow so look out for my show at 14th and Peachtree. So now I’m waiting to be transported so I can sign my own bond and get the hell out of here. I want to verify, that the Atlanta police was respectful to me considering the circumstances. See you when I see you!!!!!!!!!!!!!!”

“I was taken to precinct #5, and put in a swivel chair in the lobby with my hands handcuffed behind me. The arresting officer came over and I asked him what I was charged with? He said, ‘this could have been different’.
“Other officers came by and asked, ‘what is he doing here?’ One of the other officers in the precinct poked his head out and said, ‘the story is on the AJC’s website, already’; even before I was booked! the arresting officer had calmed down by now, and said there had been a lot of bad arrest in the past, and he asked me; if I would make a statement on my Facebook page saying, they treated me, ok. I sat in that swivel chair, a black gay man, in costume with my hands handcuffed behind my back; and I surrendered. I didn’t want confrontation, I just wanted to regain some of the pride, that was taken; that day! Without my attorney, and without Miranda being read to me; I made a Facebook post to my 5000 fans, in the precinct, typed by the arresting officer, as I dictated to him; on his computer.”

But many had grown skeptical of Baton Bob after a hateful Facebook rant on the Fourth of July against a “white lesbian bitch” and other tirades he has made against other people in the city, including LGBT people.

On July 4, 2013, Baton Bob posted to Facebook, “I want say this, to the white Lesbian Bitch that rolled upon my ASS, about a friend of hers that wanted a photo in middle of my performance that ‘s suffering from Cancer, and I stated that, I don’t do posed photos in the middle of my performance;……became indignant to me !!!!!……FUCK YOU BITCH!!!!….I said NO,….. and, I meant IT,…… BEACHICH!!……GET THE FUCK OVER IT!!!!!….DON’T IMPOSE UPON ME,…..THAT WAY!!!!!…..ALL I”M SAYING!!” Baton Bob posted to his Facebook page.

Brownlee said last year he understands why so many are upset with his client after the Fourth of July rant. But, he added, that doesn’t excuse the Atlanta Police Department from violating his constitutional right to not say anything that may hurt his defense.

“Part of my frustration is with media,” Brownlee said at the time. “People have not paid attention [to] the civil liberty violations but instead to the controversial character. Whatever he has done, he didn’t deserve to be treated like that by the police.”