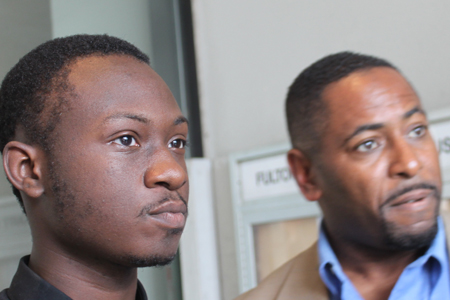 Brandon White testified at the sentencing hearing Thursday for the three young men who attacked him and said he is completely opposed to the idea of two of the assailants receiving probation as requested by a group of LGBT activists.

The hearing is set to resume in Fulton Superior Court Judge Jackson Bedford’s courtroom Friday at 1 p.m. when a sentence is expected to be handed down.

White, 20, was attacked Feb. 4 in the Pittsburgh community by Christopher Cain, 18; Dorian Moragne, 19; and Darael Williams, 17. The ambush assault was videotaped and uploaded to a hip hop website where it went viral. In the video, the attackers can be heard shouting “No faggots in Jack City” as they kick and pummel White after he is knocked to the ground.

White did not go to the hospital but said he suffered a small laceration on the back of his head as well as a bruise to an elbow and knee.

He described the beating as an “out of body experience” and said he feared for his life.

White said as went to the “pink store” at 1029 McDaniel St. to get the $2 he won on a PowerBall ticket and did not notice the defendants standing outside the store. After being in the store for about two minutes, he exited and was hit from behind by Cain.

“As I was walking out I was calling my grandmother … then, ‘Bam,’ I was hit from behind. Once I’m hit, it was like an out of body experience. I feel the pain and I think I hope I make it out of here. You hear of these things and I thought, what if I don’t make it — what are my mom, my nieces going to do,” he told prosecutor Gabe Banks. “And I’m trying to figure out why.”

White added he had no chance to defend himself because he was caught off-guard and his mind wasn’t able to process what was happening.

He called the incident “embarrassing and humiliating” after he found out the video of the beating was being broadcast on local news stations and the internet.

White reiterated he knew none of the men who attacked him although there have been accusations in the past by LGBT activists as well as Moragne’s attorney that he did know them and that he instigated the attack.

When asked about the idea of Williams and Moragne receiving probation instead of prison sentences, White said, “I don’t think it’s right.

“I’ve been sitting here [in the courtroom] and listening how they all have previous records and were already on probation. Why do you continue to attack people? Why continue to commit crimes? I am opposed to a probated sentence,” he said.

Defendants have prior criminal records

According to testimony on Thursday, Moragne, who threw a tire on White when he was on the ground being beaten, is on first offender status and probation for such crimes including theft by receiving, criminal damage of property, obstruction of law enforcement and identity fraud. He had been keeping up with his probation instructions until Sept. 5, 2011, before he turned himself in to the Atlanta Police Department on Feb. 6, 2012, two days after the attack on White.

Williams is also on probation for burglary in September 2011 but has not been compliant at all, according to testimony by a probation officer.

Cain is also on first offender status since June 27, 2011, and has also not been compliant, the officer said.

Cain’s attorney Kenya Herring questioned White about his “snug-fitting” pants he was wearing the day of the attack and asked if he heard the defendants laughing at him because of his skinny jeans. White said no because he was on his phone.

At the end of a more than five-hour sentencing hearing Thursday Moragne took the stand to apologize for his actions in the assault of White. He read from a handwritten statement he said he wrote while in jail.

Moragne apologized to White and also to the gay community.

“This attack did not only affect him but was also taken as an attack on the gay community,” he said. “We made a mistake. I don’t hate nobody. I’ve got gay family.”

Moragne also said he did not know White and had not seen him before the attack. He said he participated in the beating “to gain approval from those around me.”

He also apologized to the court system for being part of the problem and not the solution and now has many regrets as he sits in his cell.

“I truly believe that I can become a productive member of society. I am actively pursuing change in my life,” he said. “I pray for y’all’s forgiveness.”

Moragne, however, ended up an a heated exchange with prosecutor Banks during a cross-examination, saying he did not want to plead guilty to being in a gang in the Brandon White case but only did so to avoid trial.

Moragne added, “I was wrong what for what I did. I feel like I learned my lesson.”

When asked about past criminal activity, Moragne said he only pleaded guilty and received probation because that’s what was told to do so he could go home.

“I didn’t hit him to the point to kill him. I was being young and dumb,” he said.

“Did you throw a tire on him?” Banks asked.

“Did you throw a tire on him?” Banks asked again.

Two of the LGBT activists who signed onto a letter asking Judge Jackson to give Moragne and Williams probation rather than lengthy prison sentences said they have already set up places for the men to live and programs including Men Stopping Violence for them to participate in as a way to rehabilitate them.

Xochitl Bervera, a lawyer by training with a background in juvenile justice, testified she has come up with “life plans” for Moragne and Williams to include anger management and reshaping gender norms. He’s also been accepted into a mentoring program named Visions Unlimited that includes positive male role models and because he is close to getting his GED at Lanier Technical College his opportunity to get a job with the construction company Georgia Trade Up is a good one, she said.

Bervera also said a fellow student at Lanier Technical College, Kimberly Hopkins, 40, of Alpharetta, has agreed to allow Moragne live with her so he is out of the Pittsburgh community neighborhood and away from bad influences.

Williams has also been accepted into Visions Unlimited and a program named A New Approach that also teaches anger management.

“Both of these young men have been given chances,” Judge Bedford said to Bervera from the bench. “How many chances do we give them? You tell me. I’m not against giving chances.”

“A lot of times, we let them off of the services and they are not exposed to programs that hold them accountable [through the criminal justice system],” she said. “I think it’s about the right chance.”

Kung Li, who helped author the letter presented to Judge Bedford, said the group wanted to make a statement that not every person in the LGBT community wanted the men who attacked Brandon White to serve long prison sentences.

“When the case got so much publicity and then the presumption that the gay and lesbian community wanted them to serve long prison sentences … that is entirely false,” Li said.

Many of the signers of the letter helped organize a rally in the Pittsburgh community the week following the attack [White did not attend], Li explained. “We wanted him to know we loved him and we were impressed by his bravery. But homophobia is not helped by longterm prison sentences.”

Li said attempts to reach White about the letter were unsuccessful.

Read the entire letter and see who signed it by clicking here and here.

Photo: Brandon White (left) with his representative Greg Smith after the May 29 guilty pleas were entered by Dorian Moragne and Darael Williams. (by Dyana Bagby)