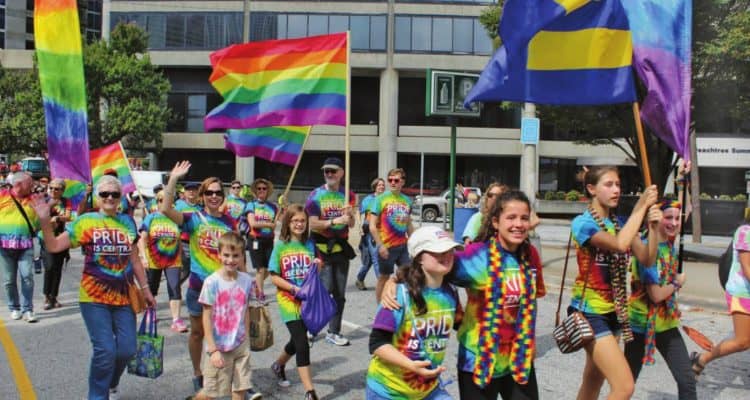 The Atlanta Pride Committee (APC) is pleased to announce that the 2018 Atlanta Parade Grand Marshals have been selected. The Grand Marshals are comprised of individuals and organizations, residing or based in Georgia who are recognized for their outstanding work advancing LGBTQ equality in the metro Atlanta area and across all of Georgia.

Atlanta Pride Committee Executive Director, Jamie Fergerson, said, “As always, selecting our Grand Marshals is a wonderful way for us to recognize those, often unsung heroes, who do so much for our community.”

Fergerson continued, “Our organization works hard to offer a slate of Grand Marshals from the wide range of diverse activists and community members among us.  That commitment has held fast, and we believe that we have done that again this year.”

She noted, “If you know any of this year’s Grand Marshals, please take a moment to congratulate them on their much-deserved recognition. And if you don’t know them, take a little time to get to know these honorees and their work.  It is a testament to the outstanding efforts in supporting our community.  The APC is so proud to be able to bring a small amount of attention to their accomplishments by giving them a place of honor in leading our 2018 Parade.”

So who exactly are these folks and the organizations represented?

Craig Washington recently returned to AID Atlanta as a Manager of Prevention Programs at AID Atlanta, the largest AIDS services organization in the Southeast. He supervises 5 intervention programs including the Deeper Love Project for Black gay men; the Evolution Center for young Black gay men; the Gay Outreach program primarily for white gay men; HIV Counseling, Testing and Referral Services; and our Comprehensive Risk Counseling Services (REDI Team). He has written various articles and editorials for the Atlanta Journal Constitution, Arise, Atlanta Voice, the Black AIDS Institute, Southern Voice, Venus Magazine, and the Washington Blade. He is one of the individuals featured in the 2007 documentary film, “The AIDS Chronicles”. His essay “A Revolutionary Act” is included in the 2006 anthology “Not In My Family: AIDS in the African American Community” (Agate). In October 2007, he received the Phill Wilson Advocacy Award from the Balm in Gilead, Inc. He graduated Magna Cum Laude with a Master of Social Work degree from GSU in May 2008.

Grady’s Infectious Disease Program (IDP) at The Ponce de Leon Center is nationally and internationally recognized for its comprehensive approach to HIV/AIDS care. When the IDP opened its doors in 1992, it was the first of its kind – the only one-stop center in the country providing medical and social services for men, women and children, and the only place in north Georgia where uninsured AIDS patients could receive care. The IDP’s role in research has helped advance care and led to major innovations in treatment. Today, the center is at the forefront in the battle against the alarming rise in HIV/AIDS cases in Atlanta and the region. In 2017, the center provided care to a record number of patients – more than 6,000. To accommodate the increasing number of individuals needing care and to meet additional service needs, a public-private partnership of supporters, including government and philanthropic organizations, will fund the renovation and expansion of the center, slated to get underway in the next few months.

Currently, Micky B is the “Regional Organizer” for TLC@SONG; a new type of collaboration combining the feminist legal expertise of the “Transgender Law Center” (TLC) & the grassroots campaign organizing of “Southerners on New Ground” (SONG).  TLC@SONG is building Transgender movement across the South from rural towns to big cities, through potlucks and legal clinics, from deep isolation to collective liberation.

Monica served in the Navy from 1970 to 1978, on two submarines. She married 1980, had two sons and now has three grandsons. She has written six books, four of them are Science Fiction, one is a collection of short stories and one is about her experience on submarines.

In 1997, she began her transition, created the Transgender Pride Flag in 1999 and donated the original Flag to the Smithsonian in 2014. She co-founded the Transgender American Veterans Association in 2003 to work for better treatment of trans veterans in the VA. In 2011, the VA put out a directive that accomplished that very goal. In 2004, she was elected as a delegate to the Democratic National Convention and was first trans person elected from Georgia and the entire South.

In 2000, she moved from Arizona to Georgia for a better job opportunity within Sprint and retired in January 2015 after working for them for 25 years. Monica earned an AA Degree in Industrial Television in 1987 and another AA Degree at Chattahoochee Tech in 2018 for Television Production. She married Darlene Wagner in 2016.

Joshua Lesser, an Atlanta native, serves Congregation Bet Haverim as their Rabbi. Proudly, he founded Sojourn: The Southern Jewish Resource Network for Gender & Sexual Diversity. He chairs the City of Atlant&ʼs Human Relations Commission and serves on the Mayor ʼs LGBTQ Advisory Board. He is the rabbinic editor of Torah Queeries: A Weekly Commentary on the Hebrew Bible. Believing that we are stronger together, Josh advocates for racial justice, gender equality, interfaith partnership and transgender rights, while challenging white supremacy
and triumphalism. He unrepentantly believes that joy is a form of resistance and that everyone can make & difference. Josh lives with his partner Alex and their dog Opal.

Scott Titshaw has the good fortune to teach aspiring young lawyers as a professor and associate dean at Mercer University Law School, where he is faculty advisor for Project Equality, the student LGBTQ rights group. Previously, he practiced law for 12 years in Atlanta, helping people immigrate to the United States. He has represented LGBT and HIV-positive asylum seekers and high school students fighting to form a gay-straight alliance. Scott also helped convince the US State Department to recognize the citizenship of some children of US citizens who used assisted reproductive technology. He created Sexuality and the Law courses at both the University of Georgia and Mercer, and he drafted a friend-of-the-court brief on behalf of more than 50 law school professors supporting a challenge to Georgia’s anti-gay state constitutional marriage amendment.

Scott has led the Stonewall Bar Association of Georgia and the American Immigration Lawyers Association’s Atlanta Chapter, and he has served on the board of Immigration Equality, the leading national organization fighting for LGBT immigration rights.

Scott lives with his partner, playwright and film critic Steve Murray, in a big old house on a hill in Macon, Georgia, but he sometimes misses Atlanta and his good friends here.

We are the silent barrier of love and compassion between those who chose to protest the differences that make us who we are.  We quietly spread our wings between those who are grieving or celebrating our uniquenesses to shelter them from the hate of those who choose not to understand or accept us.  Romaine Patterson began this movement for her friend, Matthew Shepard, which we hope to continue, as faithfully as we are able.   Love truly will conquer all.

Black Mama’s Bail Out Action is a “Labor of Love” for Southerners on New Ground.  This program is designed to bring attention to the destructive practice of the cash bail system.  This action allows a community-centered way to untangle and better understand the legal system and highlight the fact that Black mamas are targeted at higher proportions than other community populations.  In addition to bringing awareness to this overwhelming problem, Black Mama’s Bail Out Action also works to raise money to actually bail out those mamas who would sit in jail for prolonged periods, because they cannot come up with cash bail.