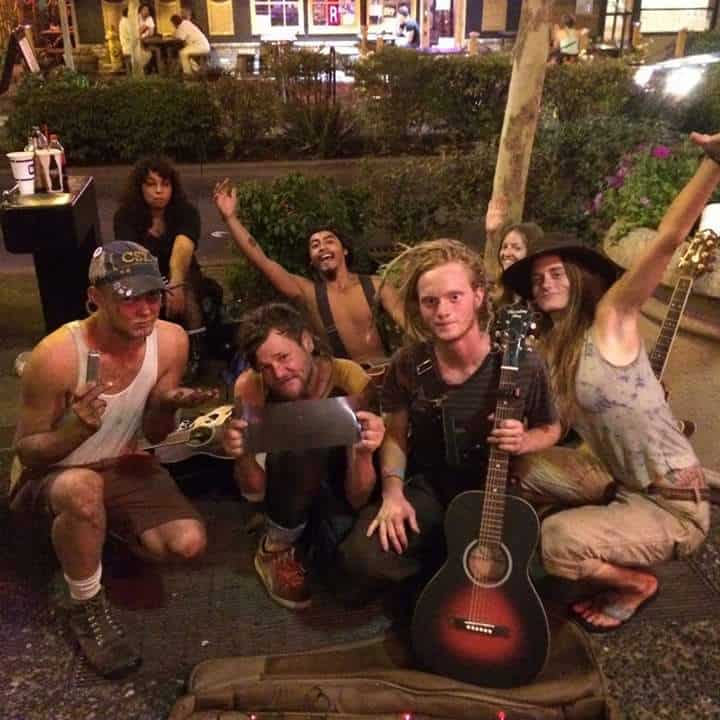 Busking’s a beloved art. Why is Atlanta so strict?

Jason Rhode
Atlanta
June 8, 2018
Busking isn’t the oldest profession, but it’s likely the second or third-oldest one. The word comes from the Spanish buscar, “to seek.” Tracy Chapman and Josephine Baker began their careers as buskers. Bob Dylan and Robin Williams busked in their day.

According to 2007 survey conducted by the StreetStage Atlanta (a busking advocacy group), the majority of Atlanta buskers were between the ages of 26 to 45; half married and half single. Most groups consisted of two or three people. A quarter of Atlanta buskers were originally from the city, and 75 percent of them were native Georgians. As a group, buskers comprise all kinds of street performances: jugglers and circus skills; magic, acrobats, comics, break-dancers, and storytellers. This list leaves out the pleasing, esoteric buskings of fire-eating, contortion, drawing, and escapology, to say nothing of the venerable practices of live-statuing or snake-charming.

And, of course, busking includes musicians.

Busking, like most street arts, is widely practiced and little understood, particularly by the denizens of the pedestrian world. With this in mind, I sought answers from the masters of the art. I specifically wanted musicians who had plied the trade in Atlanta.

Miguel Larson, of the Orlando-based act Raising Cadence, described busking in Atlanta as a great experience. “We got to play at a couple places, one being near Olympic Park and we met a lot of cool people,” he says. “The area was vast and playful. Everyone passing through were having a great time, it was a perfect time for us to play.” He recommends busking “to all musicians, dancers, artists, etc. You never know what your experience will entail … I believe musicians busk just for that exposure. The money is great and very generous, but we find ourselves busking for that connection with people.”

The band Breaking Glass has also busked here. The group is a dark, ragtime punk band from New York City, fronted by Joey Hilbert and Grayson Connelly. Breaking Glass has a revolving cast, Hilbert says, “but we travel the country and soon hopefully the world looking for like-minded people and a good time.” In Atlanta, they perform with a friend named Hayes Johnson, a sideshow performer. Hilbert says Little Five Points is one of their “favorite places to play, a lot of interesting people.” He describes busking in Atlanta: “The people [are] nice. We make a good amount of cash anywhere we are, because we have a very talented crew that plays ragtime and it’s music for everyone.”

“The cops were assholes,” Hilbert says, “but that goes for just about anywhere, and we do it because we have no homes and are nomadic travelers who need to make a living. Of course, it all starts with the love of music and playing in front of an audience, but by the time you are traveling and old enough to understand that you need food to live and no one is going to buy it for you, it becomes a necessity to breathe another day.”

Hilbert says “a good deal of kids who grew up poor and travel also busk and play an instrument.” That was why “people [busked] in our group of friends. We grew up with nothing and had to travel [and] play to find a place to stay.”

Back in 2007, according to StreetStage Atlanta, the rules were simple. Busking was legal on the city’s public property — as long as the buskers followed two simple rules: no amplification, and no singling out a particular audience (or person) for money. That changed, thanks to Mayor Reed, Julian Bond, and then-Councilwoman Keisha Lance Bottoms. According to a 2013 Creative Loafing article, “The updated ordinance made it illegal to ask for money within 15 feet of pretty much any place where people might gather, including the entrances of public or private buildings, city parking lots, and ATMs.” They were aiming for panhandlers, and hit the musicians. The misfires weren’t long in coming.

The DIY music site Sonicbids notes: “Compared to places like New York City or Austin, the rules regarding busking are a bit stifling.” In May 2013, trombonist Eryk McDaniel was arrested by police outside Turner Field during a Braves game. And that was the second busking arrest. Before McDaniel, the police arrested a Brooklyn violinist, Juan Pablo Chavez, and (according to all reports) tossed him behind bars for six days after he played at the Five Points MARTA station.

A quick tour of the Atlanta subreddit suggests that not much has changed in five years. “Atlanta doesn’t really have a busking scene,” writes one commenter. “I wish we had more street performers. Decatur Square has the potential to become a good scene.”

Indeed, Decatur is attempting to make an accommodations for open-air entertainers. In March, a city commission approved a pilot program which would enable buskers to ply their skills in a list of select locations. Angie Macon of the Decatur Arts Alliance told the AJC, “We want Decatur to be alive with music.” Buskers would be required to contact the Alliance and receive a month-long permit.

Another Atlanta Redditor commented, “The only places downtown where you can kind of safely do it near lots of pedestrians without getting private security asking you to move is the sidewalk outside Peachtree Center. Whatever security on duty will kindly tell you where the mark is, over down by the Ferris Wheel. Centennial would be a great location, but unfortunately, they’ll make you stop or kick you out the moment you start getting any onlookers.”

That’s the irrepressible fact of street performance. As long as there are onlookers, there’ll be buskers. Atlanta is no exception. The law, the government, and many property-owners of Atlanta apparently don’t like street musicians. But the people do — and so, as far as the streets of the city are concerned, as a singer once told us, the beat goes on.