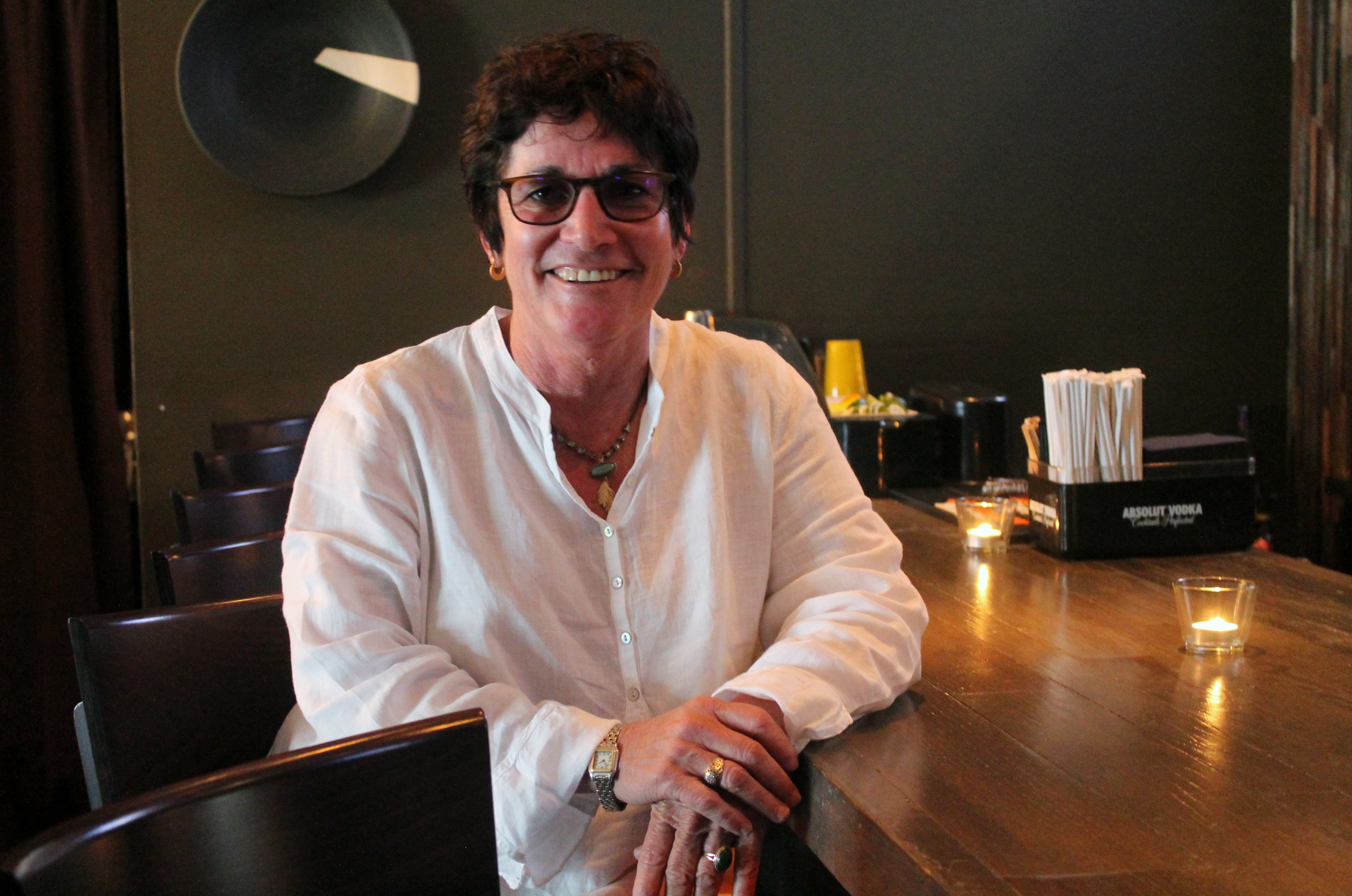 Catching Up … with Maureen Kalmanson, owner of Henry’s and Campagnolo

The sun is shining on the first beautiful Saturday of the year, and the deck is bustling at Henry’s Midtown Tavern. Servers breeze back and forth delivering trays of mimosas and gastropub fare to a lively and content crowd. In the middle of it all, gliding from table to table giving out greetings and the occasional hug, stands owner and longtime Atlanta restauranteur Maureen Kalmanson.

The 50ish gay Miami native has quickly become a fixture of the 10th street corridor, opening Italian standout Campagnolo by the corner of 10th Street and Piedmont Avenue in 2012, then Henry’s on the corner of 10th and Juniper the following year. GA Voice sat with Kalmanson in the thick of the action that recent Saturday to talk about her path to Atlanta’s gay Ground Zero, tackling two snake-bitten locations, and why the LGBT community continues to inspire her every day.

So, Maureen, can you take us through your restaurant career and how you got to this point?
I was going to go to law school. I put myself through college working in restaurants, then I graduated and ended up in Manhattan. I ran gay bars there, came back here and went to work for The Peasant in 1987. I loved it―great company and great culture. Then I started managing restaurants and managing concepts. I started in the kitchen, then I was a front-of-the-house manager, then I was a director of operations. I bought my first restaurant in 2000. When the Peasant broke up I bought Pleasant Peasant and Mixx Midtown. I designed my first restaurant and concept downtown, Peasant Bistro, in 2008. It closed right before I opened Campagnolo. Then I opened Campagnolo, and then Henry’s.

So what made you want to move out of downtown and into Midtown for your next restaurant after Peasant Bistro closed?
Once I got into Campagnolo, it felt like where I needed to be. This is my community, and I mean not just the gay community but the whole diversity of this community, the diversity of Midtown. The idea that people live here because they like diversity and they want to be around a diverse group of people―that’s where I want to be.

When I first opened Campagnolo, just the warmth and the support of the community was overwhelming. It remains overwhelming for me how wonderful this community has been to my restaurants and to me. It’s just…sometimes it makes me cry. It makes a huge difference in the way that you approach what you do.

I love being around people and I love what I do, and this has just been so rewarding personally. I’ve made so many new friends, and they’re real friends. They’re people that I see outside of this environment, and they’re people that know I work a lot so they come to see me. You know, it’s just…ahhhhh! It’s great! And it gives me an opportunity to give back to the gay community. All of it is just…. [Kalmanson starts tearing up]. I’m such a baby [laughs].

Campagnolo means “peasant” in Italian, right? What made you want to have that tie-in?
My experience with Peasant restaurants was a great one. I liked the culture, I loved the people that I worked with many, many years that taught me a great deal about this business and myself, which was imperative. And I’m kind of a sap―I can’t let go of that connection, it was important to me and remains important. So I was trying to find a way to do Italian, and have it be Peasant without being that direct, so that’s why it’s called Campagnolo. And Henry is my dog. He’s a little terrier mutt. Precious little knucklehead.

The two spots you ended up choosing for Campagnolo and Henry’s were probably the most snake-bitten locations in the city―especially Campagnolo’s. What made you think you could succeed where others didn’t?
I didn’t really care what others did [laughs]. I don’t think of it that way. The first time I saw Campagnolo, I felt like the deal wasn’t what it needed to be for me to do what I needed to do there. And then I went back to them, because I kept it in my head that I wanted to be in Midtown. And I knew I could make it a nice looking restaurant. I knew in my brain what it could be. And I just never thought about failing. I mean, certainly you approach everything with a little bit of fear, if you didn’t you’re a fool. But that’s what drives me is the analysis of what you need to do.

And Henry’s, you know I looked at this building a million times and thought, “Why is nobody putting a bigass deck under those trees?” I mean, on a beautiful corner! And I painted it brown so what you see are the people. The building kind of goes away and the people are the décor, particularly in this space outside. It’s a pretty diverse crowd, it reflects this community, it reflects the neighborhood.

That diversity was important to you, to have gay and straight alike be a part of this.
There’s no point in gay people being in some kind of enclave and that’s all they’re in. We’re a part of all of it. I have friends who only want to talk to people that think like they do. Well that is number one,  boring, and number two, there’s no exchange of ideas or exchange of perspectives that will help everybody grow. So for me, being in this kind of neighborhood and being touched by all kinds of people is important to me as a person to grow. There are a couple of ideas and I’m trying to figure out if I can make them work. I like things in threes for whatever reason. That’s always been my lucky number.

You held AIDS-related benefits at both spots right after opening. Was that a signal to the gay community that they would be welcome here and that you would want their business?
I certainly knew that there was a signal inherent in that, but those are causes that I’ve always been a part of. I was out on Fire Island in 1982 and had a Chinese restaurant in the Pines and that’s when AIDS first started to be a major, major topic of conversation and health issue. I moved to Manhattan right after that. My life changed dramatically through that experience. My understanding of the gay community that I was a part of changed dramatically.

The gay community fought for their survival when the culture at large did not. They organized on all fronts―on helping people personally, on the political front, on the health front. It was just an amazing experience and all of the young gay people today don’t realize how much that impacted all of the things that went afterward. So I will continue to support the fight against AIDS. I think sometimes they forget that it’s still an issue. Taking a pill won’t change that.

I am very proud of how the gay community responded, and how they continue to stand up and change the world―and they have.