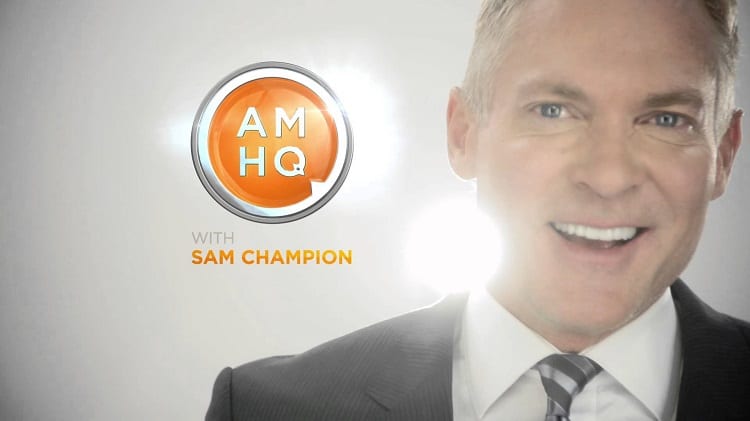 Ask him about his new job as managing editor of The Weather Channel and host of the network’s “America’s Morning Headquarters” and he turns into a little kid on a sugar high, enthusiastically regaling you with the weather details that motivate him to get up every workday at three o’clock in the morning. Days later you find yourself talking to someone about cold fronts for 45 minutes and it’s then that you realize why he’s so good at his job.

Last December, Champion moved on from his mega-successful stint at “Good Morning America” and headed south with his husband, artist Rubem Robierb, to take on a grand new venture in Atlanta. He took some time out of his busy schedule to chat with GA Voice about his southern roots, his favorite Atlanta restaurants, people blaming him for bad weather, accepting the Visibility Award at this weekend’s HRC dinner and (somehow) why he thinks he doesn’t deserve it.

So Sam, how are you and your husband settling into Atlanta so far?

I’d say for the most part it’s been really good. The enhanced difficulty is it’s not just my career that took off, but his did as well. We weren’t expecting this year to be a huge sales year for his art, and it was. He debuted a new show in New York and every piece sold off the wall. So he’s running around and it’s been hard to get him in every day of the week to Atlanta because he still has to produce his art in Miami and Jersey City. So it’s been an incredible ride for both of us just trying to juggle the move with two very busy schedules.

You were born and raised in the south. What did you miss about the region that you’ve been able to experience all over again?

I think for me the way I would describe it is my family is a full on southern family. My roots are in Tennessee and Kentucky. I was raised all over the world because my dad was a Marine. So my comfort with the south is in the fact that my family is southern. When my grandmother and my mom say my name, it can take 25 seconds, and there’s just 3 letters. That can go on forever [laughs]. I was told that at six years old, I had such a thick southern accent that no one could understand me. We moved everywhere, so for me, home is wherever you are and I’m loving it here.

How much of Atlanta’s restaurant scene have you been able to take in? Any favorite hotspots so far?

This weekend we got to Barcelona which is something that everyone told us we had to do and we loved it. We picked up a great picnic for the park at MetroFresh. I was very disappointed that they closed my pizza restaurant Piola, which was right across the street from the house. I was mortified. Now I have to find a new pizza restaurant. Lure has great seafood and we’re there a lot.

What about the gay nightlife scene? Would we ever catch you dancing at one of the local clubs or are you two a little more low-key than that?

I don’t think there’s anything low-key about us, but my schedule is not going to allow you to catch me out at night. I’m in bed at seven o’clock at night. We love going out, that’s kind of who we are. I wouldn’t be surprised to see us out running around town. But it will be on a weekend.

You’ve got a few months on the new job now, so what do you like most about it so far?

We don’t waste your time with gratuitous violence or ridiculous storylines. We tell you what you need to know to get out the door. We cover business, news…yeah, pop culture, but the tidbits you get are talkable. You’re going to be able to stand there and have a conversation with people who are in the know.

There’s something about morning television…the frenzy of it, and as violent as it is. I don’t need to know the murder trial of the day to get ready for the day. It plays to the fact that people think the only thing that people will watch is what’s loud and what will frighten you. I don’t think that’s true.

Oh wow, it’s a schedule I wouldn’t wish on many people. We’ve got people who come in at one and two in the morning. I’m up at three and in a little after four, then the first thing we do is start looking at scripts and stories we have and talking about the most important stories—weather, news stories, business stories, whatever.

What I love about it is I wouldn’t be awake at that hour of the morning but everyone else is, so you get excited about being up and being the first source of news in the day. Everyone’s in there kind of pitching stuff and that’s how we form the show.

Then we look at the graphics and the weather presentation. Then we decide what weather we need an expert for. What should we be explaining to people in some cases that they didn’t know they needed explained? How does wind exacerbate a fire situation? Then we get on the topic of, what are the weird ways that fires start and how quickly do they start and is there a way we can show people that? That’s the genius of being here at The Weather Channel is that when you have an idea like that, you have 200 brilliant voices in the room to make it happen.

You were particularly close to Josh Elliott and Robin Roberts on “Good Morning America”. Do you miss not having your buddies around every day at work?

I do have my buddies around. I talk to Josh every day whether it’s on Facebook, Twitter or on the phone. Robin and I talk every weekend. There’s a regular conversation that we have. It’s the kind of friendships that you build at ridiculous hours of the morning. I don’t think you lose those friends. We have a great common situation in that we took the number two morning show to number one. That’s a strong bond and I think we’ll always have that.

This might sound like a random question, but do people ever hold you personally responsible for bad weather, as if you have some say in the outcome?

It’s not a random question at all. Because there was a time when the audience was curious about weather but wasn’t informed, so they would say and do things like that. I’ve been doing this for long enough—it’s dirt, dinosaurs and me doing weather.

There was a less informed audience 20 years ago. They would blame you for the fickleness or the timing of a front, or when you thought there would be six inches of snow when there was two. But today the audience is very smart. The Weather Channel is really responsible for that.

With the ice storm in Atlanta, anytime people said [weather forecasters] didn’t get the forecast right, the audience was the first to say ‘yes they did.’ Everyone was smart to the fact that it was the timing of that storm that messed up the city, not the storm itself.

They understand that when a cold front is moving that the rain is on the front. You’ve watched a thousand of them now, you’ve gotten to watch them live. There really isn’t more of that, “I can’t believe you made it rain on my daughter’s wedding.”

You’re being honored with the Visibility Award at the Atlanta HRC dinner. What are your thoughts on the honor?

I think that, first of all it’s very kind and gracious because I will promise you that I do not deserve it. I don’t look to or intend to be an example of anything other than good TV—I just want to make good TV. The rest of it is totally accidental.

If someone thinks that what I think is valuable about life is interesting, I appreciate that. That was never my goal. I don’t consider myself an opinion leader, I consider myself a hardworking guy who likes to make good TV.

The Atlanta HRC annual dinner and gala is Saturday, May 3, at the Hyatt Regency.