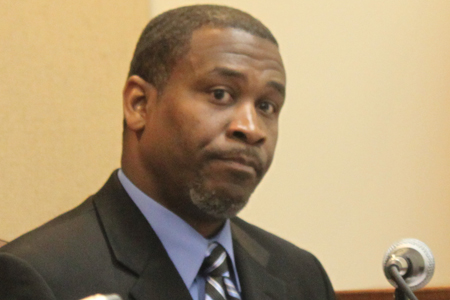 Adams and Mayes tried to get their jobs back with the APD by appealing to the city’s Civil Service Board but the three-board panel upheld the firings in both cases. They were also defendants in a federal civil lawsuit filed by patrons of the bar; the city settled that suit for more than $1 million. Two other lawsuits filed by employees and patrons of the bar resulted in the city paying out another approximate $500,000 in settlements.

Mayes, a member of the now-disbanded Red Dog Unit, was also named in a separate lawsuit by men who alleged they were illegally strip searched in public. The city settled that lawsuit for $470,000.

“I respect the judgment of the Atlanta police department. Certainly Chief  George Turner is a friend and mentor of mine,” Sheriff Kimbrough said in an interview with Winne. “The upside is that the citizens of Clayton County get some of the finest-trained, most experienced officers.”

Winne also interviewed Kliff Grimes with the International Brotherhood of Police Officers who said both men were wrongfully fired and wanted to be “vindicated.

Adams was fired from the APD for saying he did not witness patrons of the bar being patted down, that he participated as a supervisor in detaining the patrons, which went against APD standard operating procedures, and that he lied when he said he told officers to allow the patrons to sit up rather than remain lying down on the bar’s floor, according to a city attorney at a Civil Service Board hearing in October.

Adams’ attorney, Mary Huber, accused the city at the hearing of trying to appease Eagle attorney Dan Grossman and deflect bad publicity surrounding the APD because of the botched raid.

“In the rush to settle the lawsuit, the city is throwing this officer under the bus to make Mr. Grossman happy and go away,” said Huber.

Adams testified at his hearing he believed there was a search warrant for the raid before the Red Dog Unit barged into the bar to provide support to the Vice Unit and that he ordered the patrons on the ground to be allowed to sit up because they were being cooperative and he was a “humane” person.

Chief Turner testified at Adams’ hearing, reiterating the department’s policy to fire officers who have lied.

Mayes testified to the city’s Civil Service Review Board that he did not intend to lie when he told the Atlanta Citizen Review Board in March 2010 he did not pat down or frisk any patrons in the gay Midtown bar when it was raided Sept. 10, 2009. 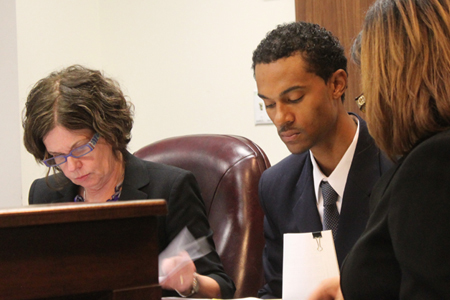 In May, however, during an APD Office of Professional Standards investigation and the $1.2 million Greenberg Traurig investigation, Mayes admitted he did pat down at least three men during the raid. He was fired by APD Chief George Turner in July after the Greenberg Traurig and OPS reports were finished and made public, showing he, Adams and many officers violated the rights of the patrons in the Eagle as well as did not follow policies.

Top photo: Former Atlanta Police Sgt. Willie Adams, who was fired for his role in the unconstitutional raid on the Atlanta Eagle, has been hired by Clayton County Sheriff Kem Kimbrough. Second photo: Cayenne Mayes at his Civil Service Board hearing with his attorney Mary Huber. (by Dyana Bagby)