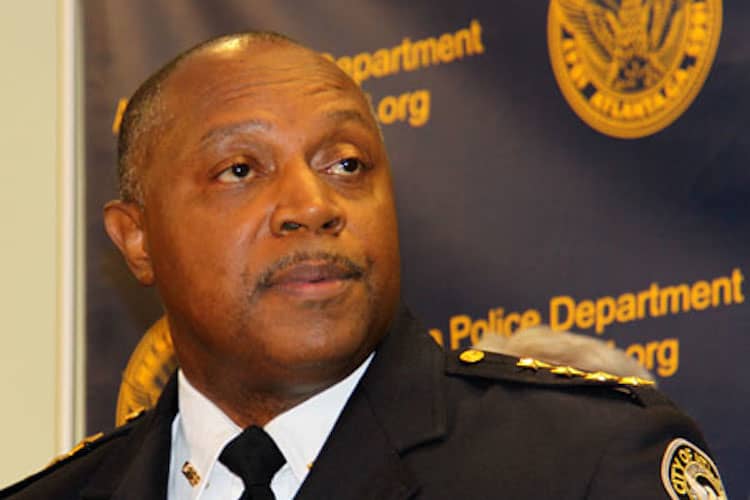 Court documents filed in federal court late Tuesday allege the Atlanta Police Department is failing to train its officers to follow court-mandated reforms that were part of the city’s settlement with Atlanta Eagle plaintiffs after the APD’s unlawful raid on the bar in 2009.

The allegations are being backed by an unlikely source—the police department’s union.

The city settled with the Atlanta Eagle plaintiffs in 2010 for more than $1 million. As part of that settlement, the city acknowledged it violated the patrons’ constitutional rights and promised to implement court-ordered reforms as part of the APD’s standard operating procedure (SOP), including:

•prohibiting officers from interfering with the public’s right to take photographs and videotape and make audio recordings of police officers and activity;

•requiring the APD to rule on citizen complaints of police misconduct within 180 days; and

•requiring the city of Atlanta to conduct mandatory in-person training for all police officers every two years regarding Fourth Amendment issues and the safe use of firearms.

However, these reforms have not taken place, even though the city was ordered to enact them by a federal judge in the original settlement and again in 2011, according to a “motion for contempt” filed March 17. Filing the motion are the attorneys who represented the Atlanta Eagle plaintiffs: Dan Grossman, Gerald Weber of the Southern Center for Human Rights and Greg Nevins and Beth Littrell of Lambda Legal.

“It is disheartening and depressing that the City of Atlanta does not want to provide its police officers with adequate training and constitutional SOPs voluntarily, simply as a matter of good government. But it is shocking that the City will not do so even when ordered by multiple federal courts,” the motion states.

“It is in the interest of both the residents and the police officers of Atlanta for the City to provide officers with appropriate guidance and training, and Plaintiffs hope this Court will ultimately fashion a remedy that is sufficiently persuasive to make these continuing problems a thing of the past.”

Ken Allen, national vice president of the International Brotherhood of Police Officers, the union for the Atlanta Police Department, is backing the attorneys in their motion to force the police department to begin proper training on such procedures as stops and searches and the videotaping of police activity.

Allen states in a letter to the federal judges presiding over the motion for contempt that the union believes “adequate training on these issues appears to have fallen short of the intended outcome.”

“Any shortcoming in these expectations increases the risk of disciplinary actions towards the officers, and further creates the possibility of criminal and/or civil liabilities,” Allen adds. “[The union] leadership agrees that these particular topics of court-ordered training are of the utmost importance and ALL standards must be met and maintained, to prevent conflicts of interest and future liabilities.”

The motion of contempt includes statements and documents backing up its charge that the city refused to remove unconstitutional training procedures when it came to stopping and detaining a person. Instead, the APD is training officers to stop and check the IDs of “suspicious persons” or “potential criminals.”

The Supreme Court has ruled it is unlawful for police officers to simply stop someone for appearing “suspicious” or looking like a “potential criminal,” it states in the motion.

Police officials did change the SOP on stopping citizens after the Atlanta Eagle raid settlement and prohibited officers from detaining people with no justification. But at a later date, the APD changed the standard operating procedure back to what it was before the Eagle raid, and it is now, again, unconstitutional, according to the motion.

“It is hard to imagine a more flagrant example of a city’s disrespect for the Constitution, or for the rulings of the Supreme Court, than a city that deliberately removes from its police ‘stop and frisk’ regulation the requirement, imposed by the Supreme Court, that police officers may stop an individual and demand identification only with reasonable articulable suspicion that the individual is involved in criminal activity,” the motion states.

“It is also shocking that the City would expose its police officers to civil and even criminal liability by instructing them to do something that is clearly unlawful.

“The very essence of this case was the City of Atlanta’s disregard for the law generally and for the Fourth Amendment jurisprudence of the Supreme Court in particular, and it is hard to imagine a clearer example of the City’s continued intention to disregard the law than its deliberate removal of a ‘permanent’ revision ordered by the Court to remedy an unconstitutional operating procedure,” according to the motion.

Another motion filed March 17 by Grossman, Weber and Albert Wan deals specifically with officers not being trained not to destroy photographic evidence of police activity, and to wear visible nametags at all times.

These allegations follow the city’s settlement five years ago with Felicia Anderson for $50,000 after she was arrested for taking photos from her front porch of an Atlanta officer arresting and beating a handcuffed suspect. Her phone was also destroyed. As part of the settlement, officers were to be specifically trained not to disrupt or destroy photographic evidence taken by a citizen.

Grossman said he became concerned about the city following the Eagle and Anderson settlements after media coverage of the Ferguson protests showed officers not wearing visible nametags and allegedly telling people they were not allowed to videotape police action.

“It is clear that court orders, standing alone, are not enough to change the behavior of the City. Something more is needed. Coercive sanctions will encourage compliance and deter future violations, and the City should also be required to notify Plaintiff of any changes to SOPs governed by the Order and to affirmatively report compliance efforts to Plaintiff and allow Plaintiff to monitor those efforts,” the Anderson motion states.

“The City disagrees with Plaintiffs’ Motion for Contempt in Geoffrey Calhoun et al. v. Richard Pennington et al. filed Tuesday in the Northern District of Georgia alleging that it failed to comply with the December 15, 2012 Consent Order. The City has spent substantial funds and has exerted hundreds of hours complying with the training requirements of this Consent Order, including the hiring of a nationally recognized expert. No language from the Atlanta Police Department’s SOPs has been improperly removed, and its policies regarding stops and other citizen encounters are constitutional. The language that appeared in SOP 3065 is now located in the Search and Seizure SOP 3020.  The APD identification requirements of the Consent Order do not apply to the gear that officers were wearing when they removed Ferguson protestors from unlawfully occupying the Downtown Connector and endangering lives. Lastly, officers are routinely recording warrantless seizure and identification checks.

“Rather than working with the City cooperatively to better the shared goal of public safety, Plaintiffs have chosen to file an unfounded and wasteful motion.  The City will vigorously defend Plaintiffs’ Motion for Contempt and expects to prevail.”