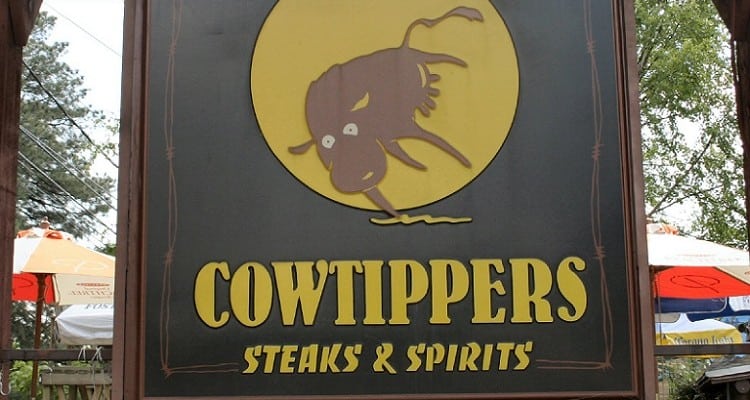 Cowtippers No More: Restaurant to Close Before New Year

Another top story of 2018 has written its final chapter. The Georgia Voice reported back in January the possible closure of Cowtippers, but Tori Allen with Metrotainment Cafes says next week will officially be their last hurrah. December 27 has been set for the last official day for the restaurant and its staff, according to Allen.

As 2018 came to a close, talks of closure resurfaced for the iconic Atlanta restaurant located near Piedmont Road and Monroe Drive.

“The Cowtippers property has been for sale. However, at this time, we have not received any updates about its sale or closure,” Tori Allen, spokesperson for Metrotainment Cafes told Georgia Voice back in November.

According to documents obtained by Georgia Voice, a company representing Chase Bank met with the Beltline Design Review Committee in early November to present plans for the construction of a bank where Cowtippers is currently located.

“The existing building, parking, sidewalks, and driveways will be demolished to accommodate a proposed Chase Bank Facility. Chase plans to construct a 3,470 square foot building with an associated 28-space parking area,” as stated in the project summary submitted to the committee.

The steakhouse opened its doors in 1993 but earlier this year, after 25 years of business, Metrotainment Cafes announced the restaurant’s closure due to a possible sale of the property, citing “changing climate of the city” as a reason for shutting their doors. They also emphasized devoting their attention to other successful concepts in their restaurant family including Hudson Grille, Einstein’s, and Joe’s on Juniper.

While the restaurant planned for closure at the end of January, a sale was never finalized and a new closing date was set. But a month later, after what they called an “outpouring of support” by restaurant patrons, the company decided to stay open ”for the foreseeable future.”

“It’s always been one of those faithful places that you can go to for food, fun, drinks and a supportive environment,” says Michael Murphy, who moved to Atlanta back in 1997. “I initially went with some friends, and I remember all of the sudden feeling like I was among my people.”

That summer, Murphy came out of the closet. More than 20 years later, he’s convinced Cowtippers helped him to feel more welcomed in the Atlanta LGBTQ community. He, along with other residents like Kevin Holcomb, grew to appreciate the cheerful, invigorating atmosphere at Cowtippers, inside and out.

“In the spring, summer, and fall, the patio was constantly full and there was always a long wait to be seated,” said Holcomb. “The clientele was 99 percent gay, so you could flirt with the guy that was smiling at you from a table across the restaurant.”

The social interaction they both experienced has now dissipated into a whirlwind of gay apps and social-media platforms. Murphy blames technology on the disappearance of gay establishments like Jungle Nightclub and Outwrite Bookstore, both catering to the Atlanta LGBTQ community for decades. In 2017, Jungle owners announced they were closing, stating a new apartment development nearby was to blame. And, after 18 years in business, Outwrite Bookstore announced their shutdown in 2011 due to “changes in the book industry and the downturn in the economy.”

Has the LGBTQ community come face to face with their own social demise?

“People see no value in going out as a social activity anymore,” says Murphy. “You’re able to hookup from your phone, and you can now make friends through Facebook and Instagram.”

While he says not all hope is lost in the city, Murphy emphasizes the need for the community to put down their phones before more establishments disappear.

“I will be sad to see Cowtippers close,” says Murphy. As crazy as it sounds, I think I will miss the sign o 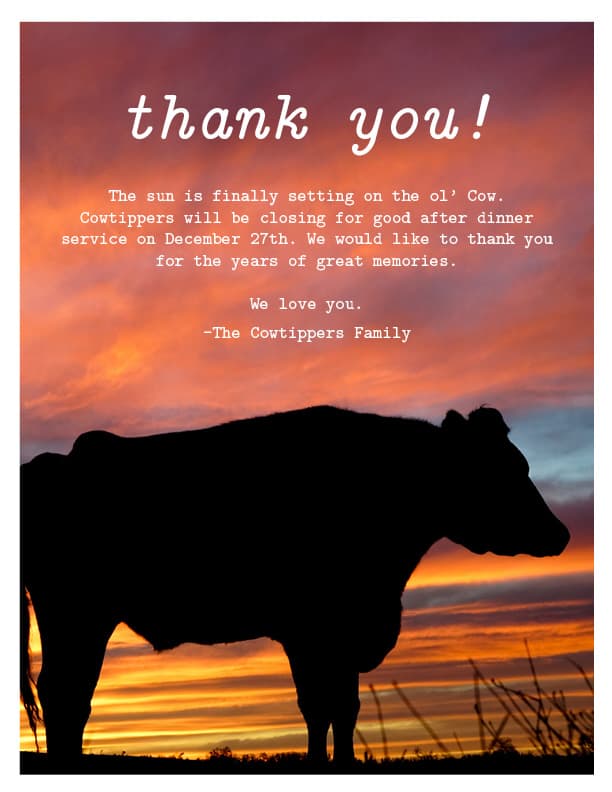 ut front the most. It was a constant reminder in day-to-day traffic, there was always a place for us.”

A farewell message posted on the company’s website reads, “The sun is finally setting on the ol’ cow…we would like to thank you for the years of great memories.” A final goodbye signed, “We love you. The Cowtippers Family.”

Metro Cafes is expected to release more details on the closure, including if they plan to relocate and reopen Cowtippers. Until then, a beloved staple of the LGBTQ community shares several last meals with its dedicated patrons before cashing out the final check.