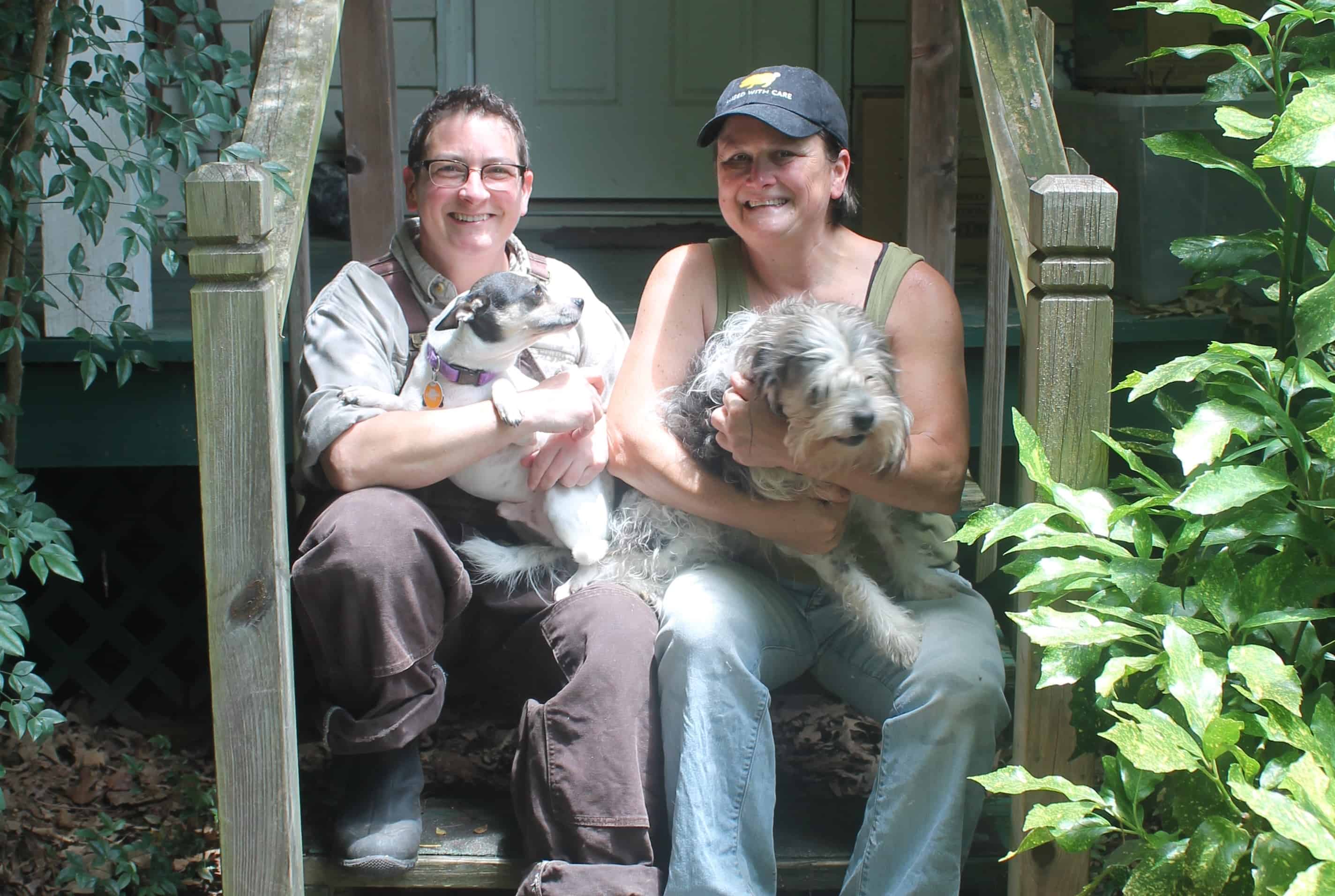 Every weekday morning at 5:30 a.m. on a farm in Fairburn, Georgia, Joan Sherwood rises to let the dogs out and get ready for her job as senior editor at Professional Photography Magazine in downtown Atlanta. Shortly before sunrise, her partner Debbie Fraker is up and ready to do the day’s chores. Not your usual chores, but the kind needed to care for … take a deep breath:

… 22 chickens, eight ducks, five guinea fowl, five goats, two dogs and a goldfish named Oscar, who spent two summers in a rain barrel and has now retired to a fishbowl inside the house.

When asked how they came to build this unique world of pets, Sherwood, 48, says with a laugh, “Backyard chickens are gateway drugs.”

They needed a larger property to have goats, so they made the move to three-and- a-half acres in Fairburn, home of the Georgia Renaissance Festival about 20 miles south of downtown Atlanta.

Fraker says they were ordering animals before the unpacking was done. Soon the goats joined the fun, and along came ducks, guineas and the rest.

The work involved in running the farm is not for the weak. Fraker’s first chores are letting the birds out of their coops, milking the goats, changing out all of the water, cleaning up and refreshing the food.

Then it’s on to the garden and the grounds, where she spends time planting, harvesting, weeding and mulching. By evening she’s milking again and locking the birds back up.

If Fraker is at her part-time job when Sherwood comes home from work, she’ll feed the chickens, do the evening milking and lock up the birds. “There’s always something to get mowed or clipped or cleaned out,” Sherwood says.

Then it’s up again the next day to do it all over again.

“We each have one morning a week that we can sleep in,” Sherwood says.

They also haven’t had a vacation in three years because  of the farm responsibilities, which they’re planning on training a neighbor to do so they can get a solid break.

“The biggest challenge is making time to relax together and not have it be about what else we have to do,” Sherwood says. “And our time schedule is so dependent on sunrise and sunset, so you have to be here when it gets dark.”

Witnessing a mother’s big day
But the payoff is more than enough for the couple.

“Watching the baby animals grow up is an awesome experience,” Fraker says.

When one of the goats was ready to give birth recently, Fraker set her alarm clock for 2 a.m. two nights in a row to be with the mother, Dena, for her big day. She was there when the first baby goat appeared, and she texted Sherwood, saying, “We’ve got one.”

Sherwood came out in the freeze of that February night with towels and water for the goats and hot tea for Fraker. Soon enough, a second little goat arrived to join the family.

“I felt like a new mom, excited and worried all at the same time,” Fraker wrote in the couple’s blog, “City Girl Seeks Farm.”

“The baby goats have made us very popular with our friends,” Sherwood says.

They also love having the ultimate farm- to-table experience.

“I’ve been gardening a lot and I get excited seeing what’s coming out of the ground,” Fraker says. “I love finding eggs, bringing milk in and vegetables to feed us.”

Sherwood notes that they haven’t had to buy milk in three years thanks to their goats. They don’t eat their friends on the farm and Sherwood often posts videos and photos to Facebook of the goats and other animals playing together—like others do with their dogs or cats, or children.

‘This is the kind of life I want’
The couple advises those looking to raise their own goats or chickens to find out what’s legal where they live.

“If you bring them in and get attached and they get taken away, it’s heartbreaking,” Fraker says.

Chickens are fairly low maintenance, they say, but keeping them safe is a challenge. Hawks and raccoons are predatory when it comes to chickens and it can make for a tragic ending if they aren’t looked after and safely put away in the coop at night.

Ducks are typically messy creatures, and goats can be very high maintenance, says the couple.

“One of things we were surprised by was we fenced in a whole new area for the goats and they went through the forage in a few weeks,” Sherwood says. “So we had to give them another new area. Now we supplement their diet with organic fruit and vegetables. They go through a lot of food.”

The overall message is to do research before hitting the road to pick up new clucking and bleating friends.

But Sherwood and Fraker wouldn’t have it any other way, even though they live outside the gay-friendly ITP bubble.

There are “not a lot of queer people out here,” Sherwood says, but all the neighbors know the two are a couple and everyone gets along great.

“This is the kind of life I want,” Fraker says.

This story is part of our Pets Issue, on newsstands and online now.