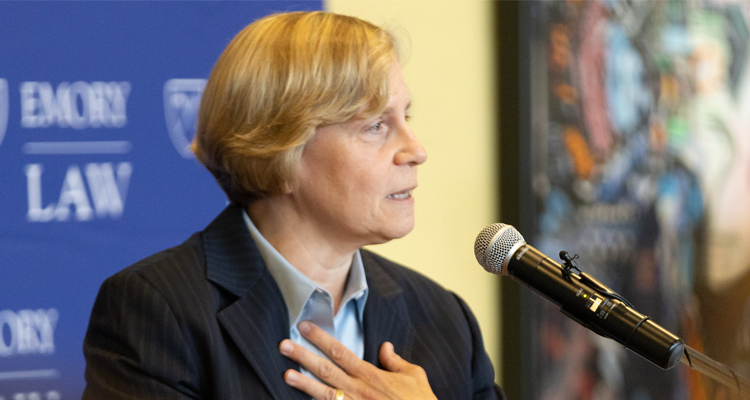 Emory University School of Law played a pivotal role in women’s history for the last century, and it continues to do so in 2019. This summer, it welcomes its first female dean, Mary Anne Bobinski.

“It is a tremendous honor to be named as dean of Emory Law, and of course to be the first woman dean of the school,” Bobinski told Georgia Voice. “Emory is highly regarded as one of the top universities in the United States. Beyond its reputation for fostering the best in teaching and research, I was also drawn by Emory’s commitment to community engagement, from programs focused on the needs of Atlanta to research shaping national and international debates.”

Bobinski said she, her spouse Holly Harlow and their daughter are excited to explore all that Atlanta and Georgia have to offer after spending a number of years in Vancouver, British Columbia, where Bobinski taught at the University of British Columbia Allard School of Law. She was dean of Allard Law from 2003 to 2015.

“I served for two terms as dean … which was the maximum length permitted by university policies. I enjoyed returning to teaching and research-related activities as a professor, but could not resist the opportunity to join the Emory Law community in this new role,” she said.

The Buffalo, New York, native earned degrees from the State University of New York at Buffalo and Harvard Law School, and prior to her time at Allard Law was a professor and senior associate dean for academic affairs at Texas’ University of Houston Law Center, according to an Emory news release.

“[I] was in law school as medical researchers began to address the emergence of HIV. I had an interest in the intersection of law and medicine, in LGBTQ issues and in human rights, more generally,” Bobinski said. “I began researching and writing on HIV/AIDS during law school and, in fact, secured funding from my law school to attend an early conference on HIV counseling and testing led by the [Centers for Disease Control and Prevention] in Atlanta.”

She said her most significant contribution thus far to the field of law is her commitment to advancing human rights. “Atlanta’s history provides so many inspiring examples of this approach,” Bobinski said. “In my own life, I have seen how lawyers, law professors, and community activists played such important roles in advancing legal protections for people with HIV infection and in promoting equality for the LGBTQ community.”

Emory Law itself has a similar commitment: in 1917, just one year after the school opened, it welcomed not just the first female law student, but the first female Emory student, Eléonore Raoul. According to Emory’s website, by the time Harvard Law admitted female students, Emory Law already graduated 25. The university is still regarded today for its inclusivity and diversity, and in 2015 was named the state’s most LGBTQ-friendly campus.

“Women make up slightly more than half of the entering class of [juris doctor] students and nearly half of full-time faculty members are women,” Bobinski said. “Moreover, Emory University’s president, Dr. Claire E. Sterk, is an internationally recognized academic leader.”

Sterk was unavailable for comment as of press time, but in the news release said Bobinski’s “track record of inclusiveness and ideals around collective impact will enhance our program and deepen our relationships with the legal community and abroad.”

Emory Law turned 100 in 2016, and as it greets its next century, “deserves an experienced, passionate and forward-thinking leader,” Erika James, dean of Emory’s Goizueta Business School, said in the news release. “I am confident that [Bobinski] will lead the law school with purpose and conviction.”

Bobinski told Georgia Voice her school isn’t content to rest on past recognition. “The faculty, staff, students, and alumni are energized by the prospect of what Emory Law can achieve in developing 21st-century approaches to legal education, research and community service. I look forward to working with my new colleagues on initiatives in each of these areas,” she said.