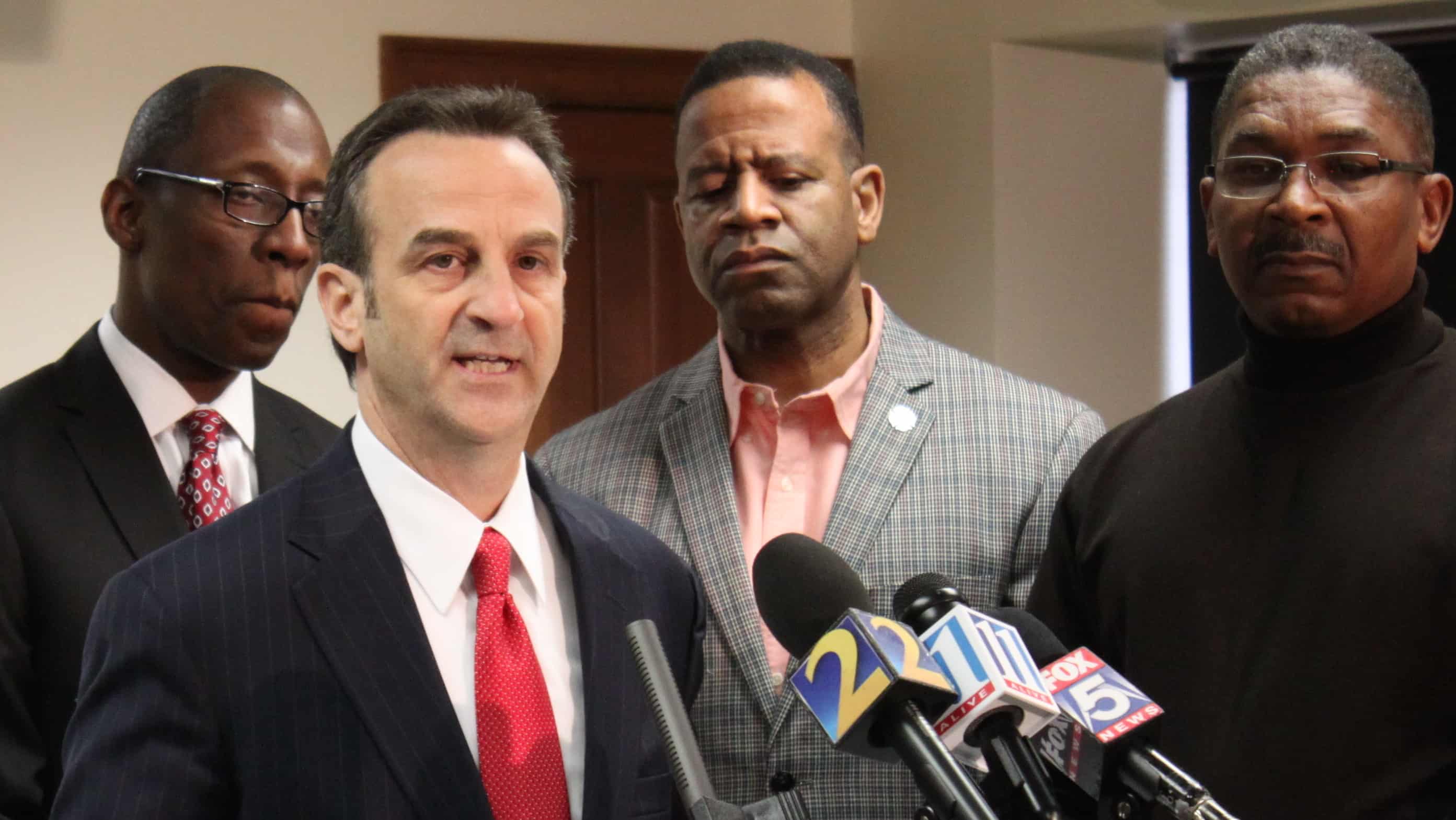 Former Atlanta fire chief Kelvin Cochran filed a federal civil lawsuit against the city of Atlanta and Mayor Kasim Reed on Wednesday, alleging his constitutional rights to free speech and religion were violated when he was fired from his job after writing a book that included passages comparing homosexuality to bestiality and pedophilia.

At a press conference Wednesday at the State Capitol organized by the anti-gay conservative Christian legal group, Alliance Defending Freedom, Cochran read a brief statement, saying his lawsuit was not just about him but about protecting the future of freedom of religion and freedom of speech in the U.S. The ADF was founded in 1994; one of its original founders was James Dobson, an anti-gay evangelical Christian and founder of Focus on the Family.

Cochran was fired Jan. 6 after a 30-day suspension. He was given the opportunity to resign but denied to do so.

“In our faith, Jesus Christ commands that his followers give themselves fully to a loving God and to love every person with condition and without exception,” Cochran said at the Wednesday press conference.

“In my career in fire service, I’ve had the privilege to demonstrate this virtue every day for the past 34 years. … I would gladly lay down my life in service to save another life despite their difference or demographic because that’s what firefighters do,” he added.

“One think we should not have to sacrifice is our God-given freedoms, the freedom of speech and freedom of religion,” Cochran said, “and no American should live in fear of being fired because of what they believe. It is unjust and unconstitutional.

“I was fired simply because of what I believed,” he said. “I cannot allow this unjust act toward me go unchallenged and I will not be passive and leave this fight for someone else.”

Cochran came under fire at the end of 2014 when passages of his self-published book, “Who Told You That You Were Naked?” became public. The book includes passages:

The 54-page lawsuit asserts Cochran was fired simply because of his Christian beliefs:

Defendants fired Cochran solely because he holds religious beliefs concerning same-sex marriage and homosexual conduct that are contrary to the Mayor’s and the City’s views on these subjects, and because he expressed those beliefs in the non-work-related, religious book he self-published.

Defendants’ actions put every City employee at risk of punishment, up to and including termination, simply for expressing religious beliefs on sexual morality that are similar to Cochran’s.

For these reasons, Cochran brings this case to protect his and others’ constitutional rights to free speech, free exercise, freedom of association, equal protection, freedom from religious hostility, and due process under 42 U.S.C. § 1983.

The lawsuit goes on to say that when Cochran became Atlanta’s fire chief in 2008, he set out to achieve a goal of inclusivity and instructed his subordinates “to assemble a group of firefighters that fully represented the diverse backgrounds, characteristics, and beliefs” within the department.

In that group, Cochran said he knew of at least two LGBT employees who were members of that group, according to the lawsuit. However, in an interview with the Georgia Voice in January, he said he did not know any gay people.

“I never had a member say, ‘Chief Cochran, you know I am gay.’ I’ve never been with a member of our community who interacted with me before we started talking business and say, ‘I’m gay,’” Cochran said at the time. He added the only person he knew was gay was out City Councilmember Alex Wan.

The lawsuit mentions Wan as well in its build up of how Cochran came to be suspended after the contents of the book became public. From the lawsuit:

The book’s primary goal is to guide men on how to overcome the stronghold of condemnation, to walk in the fullness of salvation, and to live a faith-filled, virtuous life.

The book is not about sexual morality.

The book does, however, address sexual morality on a few of its 162 pages.

Sex is one of several areas in which many men struggle.

The book teaches that God created sexual acts for procreation and marital pleasure in holy matrimony between a man and a woman.

This teaching is consistent with the Bible and historic Christian teaching.

The book teaches that pursing sex outside the confines of marriage between a man and woman—including fornication, homosexual acts, and all other types of non-marital sex—is contrary to God’s will.

This is also consistent with the Bible and historic Christian teaching.

It addresses Biblical standards of sexual morality on approximately 6 pages.

The rest of the book deals with Christian teaching concerning original sin and the ability of Christians to overcome the influence of sin in their lives through fully embracing and understanding the sacrifice of Jesus Christ.

The City permits Mayor Reed, City Councilmember Wan, and other City employees, including employees within the AFRD, to freely express views favorable of same-sex marriage and homosexual conduct inside and outside of work without fear of adverse action by the City.

However, Cochran, and other City employees who agree with Cochran’s religious views regarding same-sex marriage and homosexual conduct, are under a constant state of threat of the City taking adverse action against them—up to and including termination—if they express those views inside and outside of work.

Wan’s statement to the Atlanta Journal-Constitution that “I respect each individual’s right to have their own thoughts, beliefs and opinions, but when you’re a city employee, and those thoughts, beliefs and opinions are different from the city’s, you have to check them at the door” should be considered “startling” to all people, said ADF attorney David Cortman, who is representing Cochran.

Reed has stated repeatedly that Cochran was fired for not following city policy when he published his book, including for not getting permission from the mayor to write the book. Cochran also violated the city’s nondiscrimination policy that includes prohibiting bias against people for their sexual orientation and gender identity, and also for distributing his book to subordinates who did not ask for it.

“We have a strong nondiscrimination policy. His personal religious beliefs are not the issue at all. The city and my administration stand firmly in support of the right of religious freedom, freedom of speech and right to freely observe one’s faith,” Reed said at the Jan. 7 press conference at City Hall announcing Cochran’s termination. “His judgment is the basis of the problem.”

ADF attorney Cortman said at the Wednesday press conference there are no policies in place that mandates an employee ask and receive permission prior to writing a book and there is no policy that states an employee cannot give a book as a gift to someone.

“It is clear he was fired for his faith. And firing a public employee because he doesn’t pass a religious test is blatantly unlawful,” Corsten said.

Cochran is suing to be reinstated to his job. He also wants the city to write a declaration saying it violated his constitutional rights, to be paid for lost wages, and to have attorneys’ fees paid for.

The ADF has also put out a video as part of its campaign.