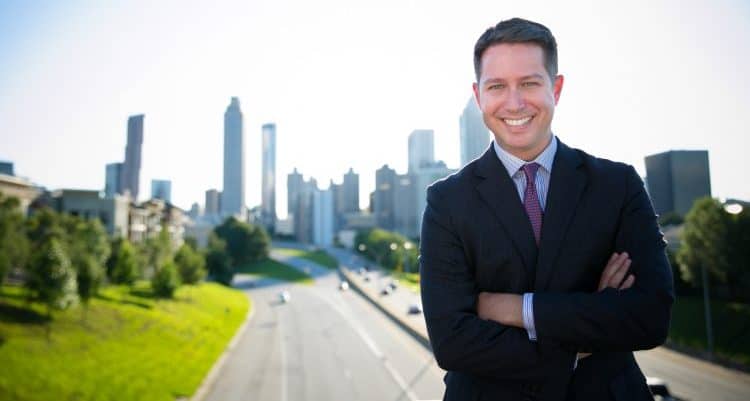 Reese McCranie, a gay Midtown Atlanta resident, is stepping out from behind the curtains to run for public office.

“For far too long, the county and the city and even the state have operated in silos when really we should be working in the same direction,” McCranie said. “There have been strained relationships between the county and city, and what I want to do is help break down those silos and really have a more collaborative approach.”

McCranie is the director of policy and communications for the Atlanta Hartsfield-Jackson International Airport, and previously served as deputy director of communications for Mayor Kasim Reed. He worked on President Barack Obama’s campaign in 2008 and was elected as a Democratic National Convention delegate in 2012.

McCranie is running for the District 4 seat, empty since the late Joan Garner passed away in April. Garner was the first LGBT individual elected to the commission. There are several other candidates vying for the spot, too — Kathryn Flowers Glasco, Steven Lee, John Jones, Natalie Hall and Joshua McNair, a fellow gay candidate.

The district includes the area around Martin Luther King Jr. Drive, Old Fourth Ward, the historic West End, downtown, Midtown, Atlanta University Center and other areas up to the Cobb County Line. About 110,000 Atlantans live there.

McCranie said Fulton County is facing several serious issues, including a lack of sustainable funding for public health outreach and Grady Hospital, property taxes that “spiraled into an abyss of uncertainty.”

He said he feels he can bring similar success to what Atlanta’s seen into Fulton County.

“I have really seen and been on the front lines of issues that affect our community. Not just the LGBTQ community, but that affect the entire city and the entire region,” he said. “I felt very strongly that with the passing of Joan Garner, who was a friend of mine, that I felt it was the right time to get involved.”

Some of the things McCranie hopes to address, if elected, include fully engaging Fulton County in the expansion of the MARTA transportation system and ensuring the drastic reduction in new HIV infection rates.

“That is the No. 1 public health crisis that is affecting the entire community. If we don’t get htat under control, there will be even more significant challenges for our long-term growth and prosperity ahead,” he said.

McCranie said much of the MARTA discussions will take place at the city of Atlanta level, but added it makes sense for Fulton County to have a seat at the table.

Fulton County government is in charge of county services — such as fire, sewer and water — for unincorporated areas of the county, as well as public health.

“Fulton County and DeKalb [County] are the main funding partners for Grady. They’re in charge of the testing units for HIV/AIDS that you see around the county and anything around any other communicable diseases,” McCranie said. “We’ve also got the courts system — Fulton County courts, Fulton County jail.”

“The county plays a significant role as being a backstock to some of the inhumane and cruel policies coming out of the Trump administration,” McCranie said. “The county really sits on the front lines of ensuring people who live here have access to healthcare, access to housing, access to jobs and training and really to ensure that the LGBTQ community is embraced.”

Some of the ways the county can address these policies include making a statement to support immigrants, ensure immigrants who are arrested or detained by police don’t get turned over to federal authorities solely on the basis of their immigration status or even become a sanctuary county.

“I know that there are significant dollars, federal dollars, that could be in jeopardy because of that statement, but we in the LGBT community really need to check our moral compass. We need to be a community that embraces everyone, or we’re not,” McCranie said.