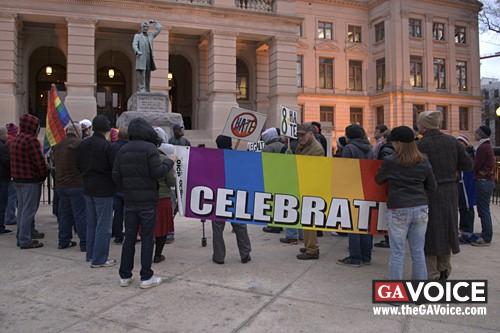 Tonight at her campaign headquarters on Ormewood Drive in East Atlanta, Norwood greeted supporters as they ate hot dogs and red velvet cupcakes washed down with beer.

Norwood’s gay fan base in this race goes back to her unsuccessful bid for mayor in 2009 when she came out for full marriage equality. She again heavily courted LGBT voters in this campaign and even received an endorsement from gay bar Blake’s on the Park.

“I did [like that] — that came out of nowhere!” she said smiling.

“I’m always in Pride. And the past two Sundays we did a Sunday night bar crawl. That was so much fun and then I was asked to be a judge at Blake’s for the Halloween costume contest,” Norwood said. “That was really fun.”

Norwood went on to even praise Nicole Paige Brooks, a drag queen she had never met, on her professionalism in emceeing a drag show and hosting the costume contest.

“She was essentially doing improv with 40 contestants and she interacted with all of them and emceed the drag show, the drag queen show … let me get the words right. It was just fascinating,” Norwood said.

Watson is no stranger to supporting LGBT issues. This year he voted in favor of a city resolution supporting marriage equality that was sponsored by openly gay District 6 Councilmember Alex Wan. He’s endorsed by the LGBT Stonewall Democrats and also by staunch LGBT advocate U.S. Rep. John Lewis.

“From my time serving on the Atlanta Board of Education to my current service on the Atlanta City Council, I have advocated for and supported the LGBT community,” Watson told GA Voice in a survey of candidates.

“Before taking a position on matters of importance to the community, I enlist the counsel of LGBT champions such as Joan Garner or my Council colleague, Alex Wan. I have never taken a position contrary of the LGBT community’s interests,” he said.

The state Democratic Party jumped in on the race to back Watson as well, sending out fliers telling voters that Norwood is a Republican.

If elected, Norwood says the first issue she wants to tackle is public safety and she pointed to her endorsements by the city’s firefighters, police and general employees.

“They know I care about operational issues and compensation issues. And because I did run for mayor and was able to get in the weeds four years ago … I feel ready to hit the ground running,” she said.

As for a future mayoral run, Norwood said she didn’t know if that was necessary.

“That two year was a long, difficult two years for me. I ran because there were things I couldn’t get done as a council person,” she said. But now she believes she can get her issues passed.

“With me it’s not about the title,” she said.

The race for mayor in 2009 — in which Kasim Reed, elected to a second term tonight — only won by 700 votes — was often contentious between him and Norwood.

But Norwood says she is certain she and the mayor can work together if she is elected.

“I called the mayor when I announced and told him I looked forward to working with him if elected. I’m not going to [City Hall] to give anyone heartburn,” she said.

“I do care passionately about our citizens. I hope I’m chosen,” she said.

UPDATE at 1:20 a.m.: With 98 percent of the precincts reporting, Norwood pulled ahead 53 to 47 percent, or 24,425 votes to Watson’s 21,870, according to unofficial results from the Fulton County election office.