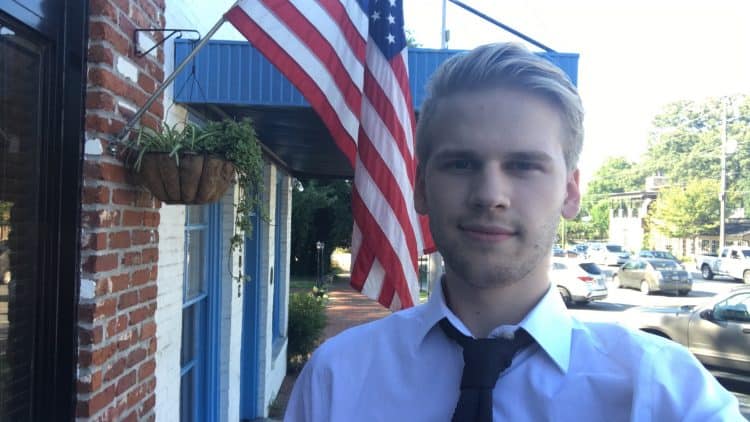 The events that took place in Charlottesville, Virginia, in mid-August sparked a nationwide debate about the symbolism associated with Confederate statues and flags erected on public property. It didn’t take long for the debate to reach the metro Atlanta area.

Reid Jones thinks it’s high time the Confederate flag be taken down from the downtown area of his hometown of Kennesaw, Georgia.

“What we are advocating is the removal [of the flag] from city property at Commemorative Park,” Jones, who is gay, said.

The flag — which was actually stolen earlier this week, he said — flies between two notable landmarks: the Southern Museum of Civil War and Locomotive History, which is an educational center, and the private property of a “known white supremacist” who flies three different Confederate flags. Jones said this nullifies the arguments in favor of keeping the flag because of historical preservation and First Amendment rights.

“We have a rich history of the time period that it was put up that almost clearly defines it as racism. You also can’t use the argument against education or against First Amendment rights, because on both sides of us we have those counter-arguments,” Jones said.

The petition he started had more than 3,100 signatures as of Thursday morning, less than a week after it launched. According to the petition, the downtown Kennesaw flag was erected in 1962 in memory of William Fuller, a Confederate train conductor “whose reclaiming of the General during the Civil War led to the deaths of eight Union raiders who attempted to acquiare the train for the Union and destroy railways used to support the Confederacy.”

Jones attended a city council meeting on Aug. 16 to address the flag’s removal, and learned that the flag was likely protected under a 2001 law that came about when the Confederate flag was removed from Georgia’s state flag. Under that compromise, the state flag could change as long as some protection was in place for Confederate statues and flags — even if they were put up during the Civil Rights Movement, and were not Civil War-era.

“Because of all the press, they decided at the very end of the council meeting to address it. They did confirm that the park is protected at a state level, potentially under the same laws that protect Stone Mountain,” Jones said. “We’re putting forth a resolution to the state to ask for control of our own parks.”

During the council meeting, one woman, who was later escorted out by police, approached Jones and his supporters to accuse them of stealing the flag. Jones told Georgia Voice the flag is routinely replaced for maintenance, plus every time it is cut down, stolen or damaged, using taxpayer dollars. The woman’s remarks were caught on video.

He said the racist, white supremacist sentiments associated with the Confederate flag today do not represent the Kennesaw of 2017.

“We have almost extreme conservativism history, but this past year we went blue for the first time in Cobb County. I know this area is changing,” Jones said.

Jones said he believes there are appropriate places for the Confederate flag, such as Confederate-era cemeteries. He said those soldiers died for that flag, but having it out now on public property does not represent them.

“Monday at 6 we’re meeting in front of the flag in order to have a rally and provide a public demonstration,” Jones said. “We’re opening it up with a prayer from a local pastor and then we’re going to have just a few brief speeches.”

He said those who wish to join the rally are welcome to bring signs, but are asked to leave all weaponry at home. Jones said many of those who signed the petition and plan to come are of the millennial generation, but he hopes to see a diversity of people — including fellow LGBT Atlantans.

“One thing I love about the LGBT community is that we know what it’s like to be oppressed. … We understand what it’s like to be consistently mocked, consistently told that we don’t have rights,” he said. “I’m trying to promote unity and I’m sick of seeing black people have to stand up for themselves. I want to see more people of different ethnicities standing up for each other.”

Watch as a woman attending the Aug. 16 city council meeting accuses Jones and his supporters of stealing the Confederate flag from a Kennesaw park: