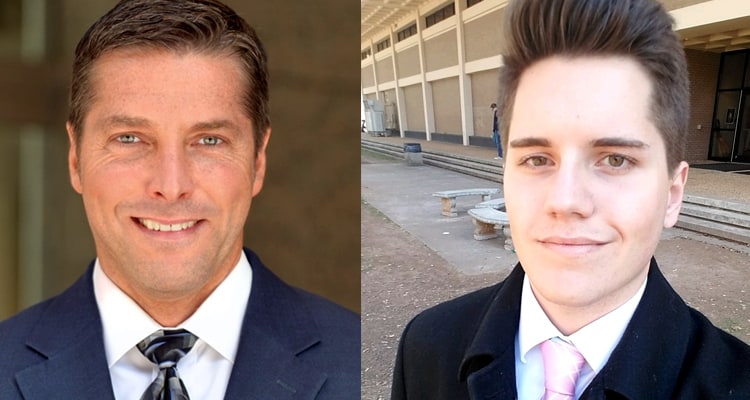 It’s been just over three months since Donald Trump became president of the United States. In that time, he has nominated a cabinet full of secretaries with dubious anti-LGBT policies and rhetorical records, he rescinded guidance from the previous administration designed to keep transgender children safe in schools across the country and his administration has flirted with a larger, more damaging anti-LGBT “religious freedom” executive order that is constantly rumored to be in the works.

As news organizations across the world mark his administration’s first 100 days, we decided to do our own check-in on his progress. In June 2016, we spoke with two gay Trump supporters, retired meteorologist Arch Kennedy and college student Avery Anderson. We recently followed up with the two to gauge their reactions and hear their opinions.

‘I am completely behind him’

When we spoke with Kennedy in June, he celebrated Donald Trump’s populism, a trait he’s still proud of today.

“He is not establishment,” Kennedy said. “He won because the people are not being represented. We have career politicians that are not in touch with their constituents. He is a winner in business and he gets things done.”

Those things he’s gotten done include appointing and confirming Neil Gorsuch as an associate justice of the Supreme Court and renewing the efforts to build the Keystone XL Pipeline, for example.

“What drew me to Donald Trump was the ‘loose cannon’ attitude he brought to the election,” said Anderson, an alternate delegate at last year’s Republican National Convention. “Considering we’ve had the same style of politicians for the past 50-plus years, it was refreshing to see someone bring a sense of pride in this country back to the game.”

“I am completely behind him,” Kennedy confirmed. “I have studied Islam for over two years and followed Islamic terrorism just as long. He is doing what he needs to do to keep us safe.”

The Trump administration’s efforts were thwarted twice by federal courts that ruled the executive orders were illegal.

Many in the LGBT community point to Trump’s cabinet as evidence of possible anti-LGBT sentiment, but Kennedy is unfazed, if not in full disagreement, with those who would make such a claim.

“I really don’t care,” he said. “Trump has continued to show his support for the gay community. He is the first president to be fine with gay marriage [at the time of his election]. Gays can marry now and that is not going to change or be reversed. Let’s move on to actual serious issues that affect all Americans.”

Anderson disagrees with Trump’s choice of nominees not because of their anti-LGBT histories, but because they may not be the most qualified.

“I think the last thing the United States needs is a group of former CEOs and special interest leads being in charge of the people,” he said.
Perhaps more as a nod to age and community influences, Anderson focused on the entire LGBT community while Kennedy focused specifically on the gay community. The two diverged most strikingly when discussing the administrations withdrawal of guidance on keeping transgender children safe in public schools – though for different reasons.

Anderson leans libertarian in his approach.

“[It] should never have been an argument,” he said. “Yes, I believe we have plenty of room for all Americans regardless of your status, but I do think we can go about this in different ways than restricting someone’s bathroom use or even letting folks go wherever they please. My university has a gender neutral bathroom system which allows folks to use the facilities they want. If a transgender student wishes to use the male or female restroom [based on identification], then sure they can, but we have alternative options to make sure they are accommodated.”

Conversely, Kennedy expressed his full-throated support for the Trump administration’s revocation, saying, “It is very simple. If you have man parts, you use the men’s room and locker. If you have female sexual parts, you use the women’s locker room. It isn’t fair to put kids in this situation for a portion of population that isn’t even 1 percent. Once you get the sex change, then you are golden. This does not even deserve to be a political issue.“

Neither man is willing to write Trump a blank check though. Kennedy disagrees with the administration’s recent attacks on Syria, believing the US has no place in the Middle East, save for its alliance with Israel and its sanctions on Iran.

For his part, Anderson hopes Trump turns his attention toward education.

“We need a serious investigation into the public university system and to understand exactly where funds are being sent, how tuition is being processed, who the universities are hiring on to their staff and why students are now left with a sense of apathy,” he said. “If we ever expect to ‘Make America Great Again,’ then we need to start making America great by helping our youth with college reform, getting them the education they’ve paid for and having them understand the value of a higher education.”

Anderson has also turned his energy toward American unity, keeping his focus on people, rather than policies.

“What matters is that we are all still Americans. It is our duty to protect and care for each other, regardless of the issues and stances we agree or disagree with.”