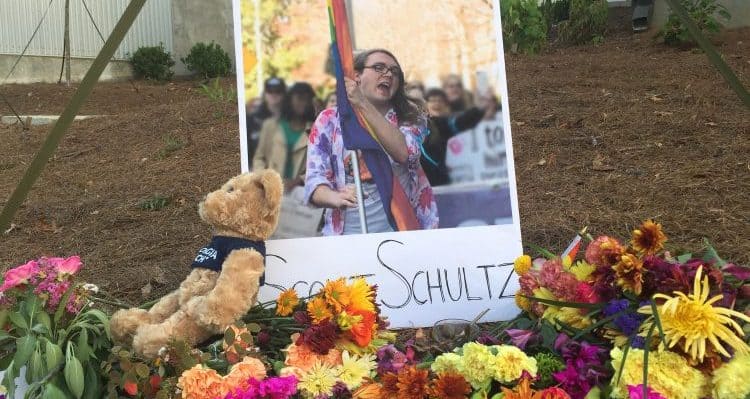 Scout Schultz, president of the Georgia Tech Pride Alliance, was shot and killed by campus police on Sept. 16.

“We are all deeply saddened by what has occurred,” a statement from the Pride Alliance board says. “[Schultz has] been the driving force behind Pride Alliance for the past two years. They pushed us to do more events and a larger variety [of] events, and we would not be the organization we are known as without their constant hard work and dedication. Their leadership allowed us to create change across campus and in the Atlanta community.”

The Georgia Tech Progressive Student Alliance and Pride Alliance will host a vigil tonight in Schultz’s memory. Mourners are asked to bring flowers and candles if they are able. Students began placing flowers and memorabilia on 8th Street at the site of the shooting on Sunday afternoon. Georgia Tech Vice President of Student Life John Stein, who is also the dean of students, said in a statement “he was deeply saddened by the tragic death,” the Atlanta Journal-Constitution reported.

“We are distraught over the loss of Scout Schultz,” the Progressive Student Alliance said in a Facebook post. “They were an incredible, inspirational member of our community and a constant fighter for human rights. … We love Scout deeply.” 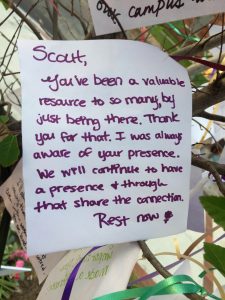 ‘No one around at risk’

Schultz, who used the singular pronoun they, identified as bisexual, gender non-binary and intersex, according to the Pride Alliance website. They were a senior computer engineering major and biomedical engineering minor.

“When I’m not running Pride or doing class work, I mostly play [Dungeons and Dragons] and try to be politically active,” Schultz’s officer biography reads.

Schultz, 21, was allegedly walking barefoot and carrying a knife. In cell phone videos shot by students nearby, Schultz is seen walking toward officers outside of the Curran parking deck. Schultz can be overheard telling officers to shoot. They were instructed several times to drop the knife, and after about 60 seconds of not complying with the demand, a gunshot sounds and screams are heard. Schultz was shot in the heart and died after being transported to Grady Hospital.

According to the AJC, “a multipurpose tool found on the ground is believed to be the knife Schultz held. The tool did not show an extended blade.”

“Officers provided multiple verbal commands and attempted to speak with Schultz, who was not cooperative and would not comply with the officers’ commands,” Nelly Miles, spokeswoman for the Georgia Bureau of Investigation, told the AJC. “Schultz continued to advance on the officers with the knife. Subsequently, one officer fired, striking Schultz.”

GBI is investigating the shooting.

According to the website Heavy, the shooting took place around 11:30 p.m. when Georgia Tech police responded to an emergency call saying a person with a knife, and possibly a gun, was near campus. Students were instructed to stay inside and lock all doors and windows. Within 15 minutes, an all-clear was given, as was a notice that there had been an officer-involved shooting.

Schultz’s mother, Lynne, spoke with the AJC and said when she first heard of their death, she assumed it occurred at a protest rally. Then she wondered why campus police didn’t use non-lethal force to de-escalate the situation.

Stewart does not believe Schultz was attempting “suicide by cop,” though their mother did say Schultz did attempt suicide two years ago.

“I think [Schultz] was having a mental breakdown and didn’t know what to do,” Chris Stewart, an attorney for the Schultz family, told the AJC. “The area was secured. There was no one around at risk.”

The Georgia Tech community was invited to leave “a note of love” at the 8th Street location.

“You were so brave, and you gave us all the value we needed,” an anonymous note reads. “I’ll always remember you waving that rainbow flag even in the wake of hatred. You are loved.”

One, signed “Stephen,” thanks Schultz for being “such a powerful voice” and for “pushing us to be radical and involved in making our community a more thoughtful place.”

The note left by Vathsan Ramprakash reads, “Scout stood for all that is good in this world. I know they’re still fighting the good fight.”

“You’ve been a valuable resource to so many, by just being there. Thank you for that. I was always aware of your presence. We will continue to have a presence and through that share the connection. Rest now,” a second anonymous note says.

Glass, an assistant professor in the School of Earth and Atmospheric Sciences, told Georgia Voice that she only met Schultz once, but they left a profound impression.

“It’s really horrible. I think everyone’s grieving right now and processing it and just in a lot of pain,” Glass said. “I hope we can have some candid conversations about the issues behind what happened in the days to come.”

Some of those issues include the lack of funding for LGBT, mental health and suicide prevention resources available on campus, she said, as well as a discussion on police brutality.

An incident report from Georgia Tech was not immediately available. We will continue to update this story.