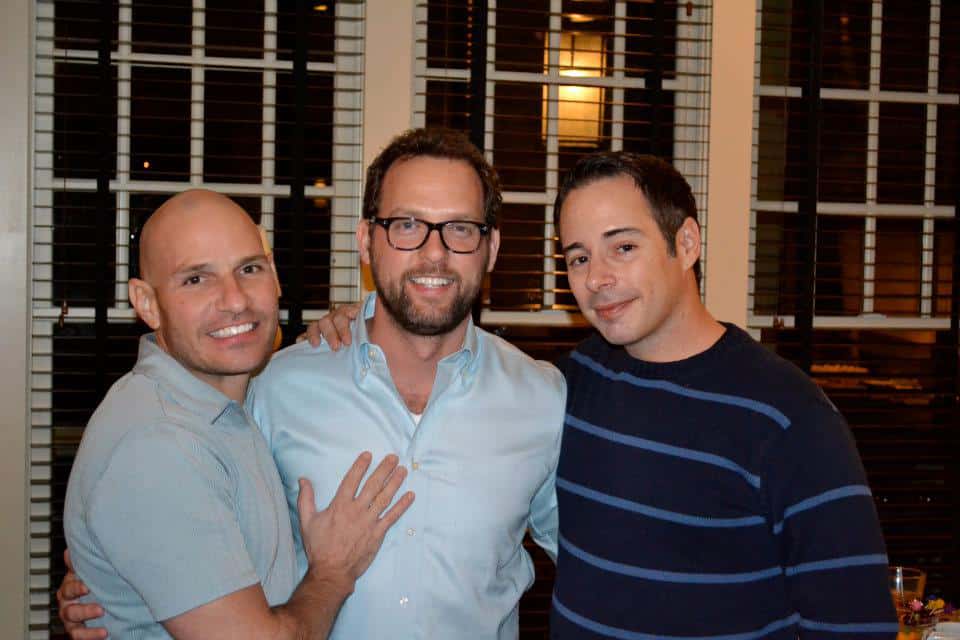 He told us loved us all the time, and I never once doubted it.

As they were taking him back to the operating room, we held hands and I told him I loved him. He said it back. Then he said, “Timmy!” and reached out for my boyfriend, Tim, who was hanging back. Tim stepped up to Mike’s bedside, and they held hands. Then Mike said in the sing-song way he always did, “Aw, I love you guys.”

If we’d known this was it, what would we have said or done differently?
Years of lazy weekends, witty banter, arguing about things beyond our control and daydreaming about the future—and then someone pressed the fast-forward button and the film strip suddenly ran out.

Mike Ritter was like a character out of Central Casting: wise-cracking boy-man savant with a heart of gold.

He loved old movies and had an encyclopedic knowledge of early- and mid-20th century Hollywood. He could recite dialogue from hundreds of movies on command. And there’s no one who ever lived who knew more about Bing Crosby, Bob Hope, Dorothy Lamour and their films, particularly the “Road” pictures.

When we arrived in the ER and were being updated on Mike’s condition, he excitedly interjected, “aortic dissection, it’s what Bing died of!” I thought, well isn’t that perfect. Now he’ll have another story to tell.

Mike was a storyteller. Over the years, I must’ve heard all his stories several times. He’d refine the delivery, add in a beat before the punchline, throw in a reworked turn of phrase. He’d look over for my approval, and I’d roll my eyes. But the narrative arc was always the same. Mike cast himself as the lovable loser. At just the moment he might finally get what he wanted—and you’re with him, you’re rooting for him—fate intervenes to knock him down a peg or two. We’d die laughing at his expense. And he’d bask in that moment.

He had a natural ability to connect with people. Whatever your passion, he knew enough to engage you on that topic. Whatever your talent, he’d say you were brilliant and mean it. Everyone he befriended was rooting for him. We wanted him to make it, to finally find success—that boyfriend, that puppy, that fixer-upper with an original ceramic tile bath, that platform from which to influence or entertain.

When I first met Mike at the Tribune in Arizona, he was a Republican and held many of the views common to Republicans then and now. Gay issues weren’t as front-and-center, but he’d done his share of anti-gay cartoons.

I sat at a desk just outside his office, and we’d debate politics both in the newsroom and at bars after work. One night, he sat down beside me with a beer, looked me over and asked, “Have you ever heard of the Kinsey Scale?” I wasn’t the first guy he’d tried that line on, I later found out.

I already had a secret boyfriend of my own at that point. But from that night, our friendship grew. And together, all three of us began emerging from a life of fear and duplicity. Mike would describe those early years out of the closet in the sunlight as the happiest of his life.

Editorial cartoons were the perfect medium for Mike. In one frame, he combined his gifts for humor, sanctimony, poignancy and exquisite artistry.

His characters were expressive, his cross-hatching technique laboriously old-school and amazing. After I moved to Atlanta, we collaborated on dozens of illustrations for the Atlanta Journal-Constitution, where he later worked as a page designer. He visited us often, and launched a comic strip—Midtown Tales, about a gaggle of Atlanta gays—that ran in a Phoenix magazine. One character in the strip, the lovable loser, looked suspiciously like Mike.

At the height of the recession and with his most marketable skills attached to a dying industry, he struggled. He went from being a nationally syndicated editorial cartoonist and TV pundit in Phoenix to working three part-time jobs to make a living in Atlanta. He sometimes forgot who he was and what he was capable of. But I loved having him in Atlanta with us, and he continued to make friends wherever he went.

In the last year, he seemed to find the peace and professional fulfillment that had eluded him for so long. As art director for GA Voice, he finally began to feel successful again. He loved the work and believed he was doing something important for the gay community.

Last December, he reunited with his best friends from Arizona State and spent the holidays with my family in Florida.

In the end, it’s hard not to think Mike Ritter gave the world a lot more than he ever got in return.

None of us could match his wit, his talent and his willingness to put himself out there. Certainly not me. He was one of a kind. He was my best friend, and I’m so fortunate for the years we had together.

That night in the ER as I was texting my mom and talking to the nurse, Mike’s trying to get my attention and says, in slurred speech, “Will, Will… Do you know what Bing’s last words were before he died?” No, Mike, I don’t. “Bing was golfing with his buddies and had just finished the 18th hole … and he said, ‘That was a great game of golf, fellas!’” Great game indeed.