An announcement could come as soon as next week, Morrison said. All members of the council are up for election in November. “Alex Wan is not our candidate. We are business owners and we have a voice, too,” he told the GA Voice on June 4.

Morrison said he and other Cheshire Bridge business owners targeted by Wan’s proposed legislation have been talking about backing a candidate to oppose Wan for some time and continued the conversation late into the night after the council vote.

“We’re a permanent part of the landscape,” Morrison said of adult businesses. “He was able to take his personal views and push forward this legislation — that is not going to happen in this election.”

‘A VOTE FOR ME IS A VOTE AGAINST ALEX WAN’

Morrison is not afraid of a fight. As an owner of several successful adult businesses that cater to LGBT and straight customers in metro Atlanta and a gay club opened last year in Miami, he has a permanent bulls-eye painted on his back and is accustomed to city officials and residents living near his clubs wanting to shut down his stores. Going to court to fight to keep his businesses open is part of the job. In the mid 1990s he was arrested in Atlanta on obscenity charges and police raided his stores several times. Eventually he helped strike down the state’s obscenity law in a time known by some as the “dildo wars.”

But he also ran into legal issues and in February 2005, Morrison was convicted of tax evasion and spent nearly three years in a federal prison. Interestingly, he served time
with former Atlanta Mayor Bill Campbell, who instigated police raids of Morrison’s shops. Campbell was also found guilty of tax evasion, according to the Atlanta Journal-Constitution.

“I may not be electable, but a vote for me is a vote against Alex Wan,” Morrison said.

Morrison said he is prepared to spend $150,000 in this election to try to defeat Wan.

Wan’s campaign had almost $49,000 in cash on hand as of March 31, the date of the latest financial disclosure statement. This amount does not include money raised at an upscale LGBT fundraiser on April 25 where many of the city’s gay elite served on the host committee. 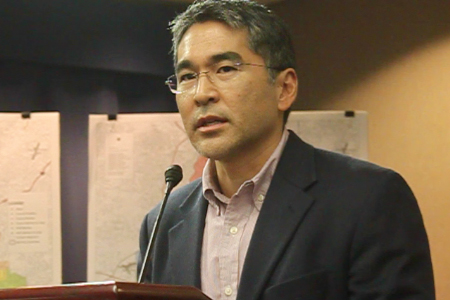 Wan’s proposed legislation angered many in the LGBT community who accused him of betraying his own community by going after sex shops and strip clubs. Cheshire Bridge has a long history serving as Atlanta’s red light district and was where the first gay clubs opened and several continue to operate.

Now that the vote is over, Wan wants people to understand he was trying to serve his constituency, those who live in District 6.

“This effort was never meant to anger the LGBT community, and I recognize that it did with some. I absolutely appreciate the history the community shares with Cheshire Bridge, which is why I made sure any strategy would not negatively impact the bars and clubs — either in this corridor or elsewhere,” Wan said.

“I am sorry if folks feel my targeting the adult businesses has undone all of the community work that I have done for the overall LGBT movement.”

News that Morrison or some other candidate may oppose him doesn’t worry Wan too much, he said.

“I will be prepared if this issue prompts someone to run against me this fall. I believe I have served the constituents of District 6 very well on a broad range of issues, and I would look forward to putting that record up against any potential opponent,” he said.

“I was hoping to gain council’s support in rectifying the bad zoning which allows adult businesses to exist in the back yards of our community’s residences. Such incompatible uses should not lie in such close proximity to one another and result in sustained, negative impacts for surrounding neighborhoods,” she said.

Wan had urged his fellow council members to vote in favor of his proposed legislation,noting that the idea to rid the Cheshire Bridge corridor of a proliferation of sex shops and strip clubs originated in 1999 with a task force. That task force’s vision was then adopted by the City Council in 2005.

“A ‘no’ vote to me shows your willingness to allow six or seven businesses to continue dictating and negatively impacting thousands and thousands of community stakeholders; not just residents but businesses too,” Wan said at the meeting.

District 2 Councilmember Kwanza Hall said he voted no because of the “unintended consequences on multiple other districts.” He was also uncomfortable with zoning out non-conforming businesses that were grandfathered in by the city.

“If you have an operating businesses and just close them down – if you do that for one type of business you can do that for others,” Hall said. “This [legislation] opens the door and sets a precedent.”

Top photo: Michael Morrison, owner of Inserection on Cheshire Bridge Road and other adult businesses including a gay club in Miami, said he will run against Alex Wan if no one else steps forward. Second photo: Alex Wan at the recent City Council Zoning Committee meeting. (Photos by Dyana Bagby)